Transport for London’s Santander Cycles hire scheme is set for expansion following unprecedented levels of demand in the wake of the COVID-19 pandemic. 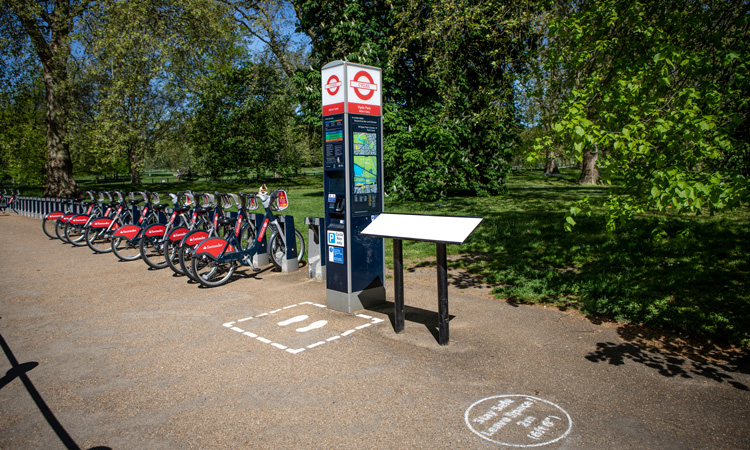 Transport for London (TfL) has set out plans to expand its Santander Cycles scheme to keep up with unprecedented demand in the wake of the COVID-19 pandemic.

Data from TfL shows that cycling in London has increased significantly in recent weeks, with thousands of Londoners using bikes more often for both leisure and essential travel. May 2020 was the best in London’s cycle hire scheme’s 10 year history, with 1,120,620 hires. It also had the highest ever number of hires in a single week – with 362,925 hires made between 25-31 May – and the highest ever number of hires in a weekend, with 132,979 hires made on 30-31 May. The free Santander Cycles hire scheme for NHS staff has also fuelled demand, with 30,000 free journeys made since the offer was made available in March.

TfL is also making 1,700 more Santander Cycle bikes available, bringing the total to more than 14,000 – an increase of nearly 15 per cent and the largest single increase in bikes for the scheme since 2013. TfL is working to rapidly create extra space for cycling and walking across the capital as part of the Mayor’s world-leading Streetspace for London programme. Temporary changes are being made to roads to support safe walking and cycling and enable social distancing.

Commenting on the expansion, Mayor of London, Sadiq Khan, said: “I’m determined that our city’s recovery from coronavirus will be clean, green and sustainable and enabling more Londoners to cycle is absolutely central to this. I’m delighted by the unprecedented demand for cycling over the past few months. We’ve seen three times the number of people cycling in some parts of our city compared to before the crisis, huge demand for our free cycle hire scheme for NHS staff and carers, and multiple Santander Cycles records being broken. By adding new docking stations, cycle hire hubs and bikes we are making it even more convenient to take to two wheels.
“I am proud that our Streetspace for London plans are making it safer and easier to cycle in our city, and freeing up space on public transport for people who have no alternative.”