Posted: 20 May 2020 | Sean Moroney - Cambridge Electric Transport | No comments yet

Sean Moroney, CEO of Cambridge Electric Transport, discusses the positives of bringing e-bikes to UK cities, and the challenges that come as a private sector organisation working with local councils and cities in creating the infrastructure that such a service needs. 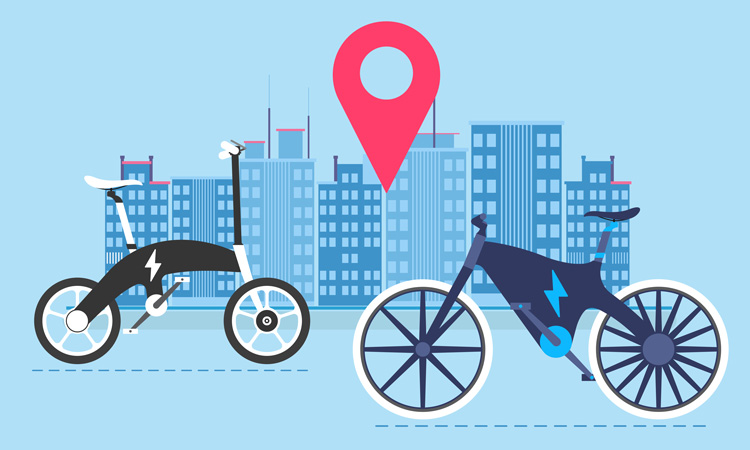 How did your company come to be, and what solutions are you providing?

We launched Cambridge Electric Transport in February 2017 as a mobility innovator. My co-founder at the time, Peter Dawe, made his millions in the internet as a real disruptor. Importing a container load of electric bikes was part of his transport vision. He wanted to show that they could work as an alternative to cars, but equally behind that was his vision of creating a weatherproof four-wheeled electric bike. With that idea in mind, but instead of focusing on e-bikes, I switched the business to a model of providing Mobility-as-a-Service (MaaS).

We started renting out e-bikes on a business to business model, in which we sell contracts to major employers in the Cambridge area to encourage their staff to get out of their cars and start cycling. The brand is called Bizbike, which we launched in July 2018.

We’ve also got to work very closely with local authorities, as we’ve tried to do in Cambridgeshire, and help them develop their thinking

We have some of the major employees in the north area of Cambridge subscribing to our service. Their employees can pick up a bike at any of our pick-up points in the morning, and keep it all day, giving them the security that they’ll have it for their return journey. It’s a shared bike, but it’s not fully shared during the day. As such, the employers pay more than compared to normal public e-bikes, for our premium service.

For shorter journeys, we’ve just introduced pedal bikes. We have just opened up a pick-up hub for this, at Cambridge North station, which is one of our new train stations. From there it is a short, one-mile journey through to the Science Park. It’s an irritating walk, but it works perfectly with a pedal bike. 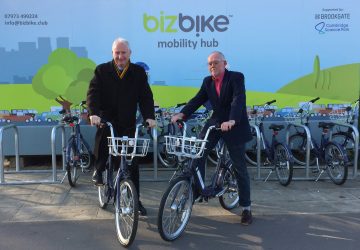 We’ve now been through two winters. We see a dramatic downturn in usage during the winter months and it’s very disheartening. This has really brought me full circle, back to Peter Dawe’s original vision, which is to build an all-weather electric bike with three or four wheels providing stability. This bike is safer for inexperienced cyclists and a lot safer than cycling generally, because it has a protective cell around it. This is what we have been working on, alongside the shared bike scheme.

When it comes to defining that as a bike, where does it sit with policymakers?

We have to conform to the EU electric bike regulations. For instance, the motor has to be a maximum of 250 watts and its top speed must be 25 kilometres an hour at most. Naturally, we will conform to all those e-bike regulations in order to make our product acceptable throughout the EU.

We tested a four-wheeler versus a three-wheeler bike. We’ve chosen a three-wheeler partly because it allows us to make it a tilting bike, which is a lot more user friendly, provides a smoother ride and is easier to turn – almost touch-steering with a single wheel at the front. It resembles a microcar and we have called it the CitiPod. By coincidence, the design also conforms to American e-bike regulations. In the longer term, we see America as the next potential market for us. Our commercialisation model is multi-tiered in that there’ll be individual ownership, but they will also be shared in fleets. 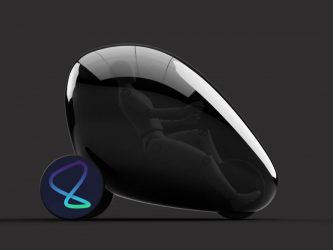 We will work with fleet operators in cities across Europe and provide them with a software platform that they can plug and play. Basically, providing a turnkey solution where they buy the vehicles from one of our manufacturing partners. We’re not going to get into manufacturing ourselves, but rather we will license the production and link fleet operators to get the supplies – the bikes. We provide them with training, the software platform, and we do it on a per transaction revenue share basis. That’s the revenue model that we have in mind at present. We are now looking for a partner with the necessary resources to fully develop the CitiPod design and get it to market. The zero-emission micromobility solution it provides is even more urgent now as we all return to work with COVID-19 decimating public transport and the danger of towns and cities being flooded with single-passenger car use.

When it comes to branching out, and assessing other places where your scheme might work, is it difficult to imagine anywhere else in the UK that’s as good a fit as Cambridge?

As usage grows, pressure will grow for the local authorities to upgrade the cycle paths

As an example of poor planning in Cambridgeshire, Highways England has built the new A14 through to Cambridge and along it is a fabulous cycle path. However, local authorities have not planned any connections to it from villages along the route.

Positively, the cycling team in the Cambridgeshire County council and Greater Cambridge Partnership have the vision to develop a whole network of Greenways, as they call them. This will definitely see improvements over the coming five years.

Some of the major cities across Europe are introducing car-free zones, yet when we look at some of the UK’s towns and suburban areas it’s seemingly unthinkable. Why is that the case?

There has to be strong leadership from the top. We’ve also got to work very closely with local authorities, as we’ve tried to do in Cambridgeshire, and help them develop their thinking. We’re working with the South Cambridgeshire district council on two schemes at present, starting a village e-bike service.

Really, the service is a bit of a no brainer. We base a couple of e-bikes in bike lockers in a participant village and then the residents can access them. In some cases, South Cambridgeshire is subsidising the cost. In Northstowe, a large new town that’s been developed north west of Cambridge, they are funding 20 e-bikes, which we will launch post-lockdown for residents to use on a subsidised basis. There is an appetite in local authorities to find solutions and it’s private sector players like us that need to reach out and find out where those synergies are and work with them to make it happen.

And as usage grows, pressure will grow for the local authorities to upgrade the cycle paths. In this village set up, riders have to return their bikes to the same place after using them, ie the bike lockers.

We have developed a partnership with BikeShare in Norway to launch a city-wide e-bike service in August that will use super-lightweight batteries enabling riders to carry their own batteries in handbags or backpacks, use them for their rides and then charge them at home or at their office for the next ride. This will eliminate the need for charging infrastructure and reduce security risks. Our plan is to launch with 500-plus e-bikes and over 40 pick-up points across Greater Cambridge. These will be geofenced, providing us with the security of knowing where our bikes are, should they go out of area.

Operators have much to do in educating their customers and that’s part of our mission –  to try to inform and hand-hold our riders. We’re targeting non-cyclists; we want to get non-cyclists out of their cars, but naturally a lot of them are inexperienced. So, we always try to be there for their first ride to educate them about the safety features of the bike and how to operate it, as well as providing them with  route maps and having a helpline in the event of any mechanical or other problem.. It is imperative that we provide them with that support, for their safety, and to provide them with a positive experience that makes them want to cycle again.

Sean Moroney studied Economic Development at Oxford and started his career as a researcher and business journalist. In 1987 he founded Africa’s first computer magazine, followed by a business event group of companies in the UK and Africa which held ICT and financial technology conferences and exhibitions in over 15 countries. In 2017 he founded Cambridge Electric Transport as a green micromobility initiative which is expanding its network across the Greater Cambridge area, with plans to expand to other cities.