Fuel cell buses are being trialled across Europe as clean alternatives to diesel buses. In this article Sabrine Skiker, EU Policy Manager at Hydrogen Europe, and Michael Dolman, Principal Consultant at Element Energy, summarise the status of this innovative technology, introduce the latest deployment plans, and consider the outlook over the coming years. 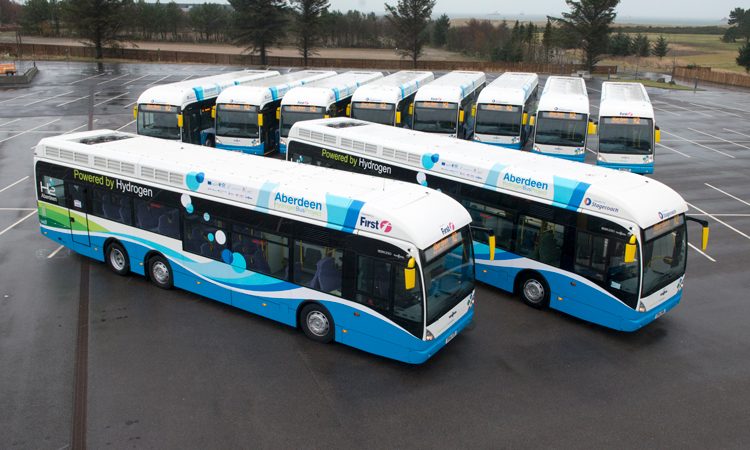 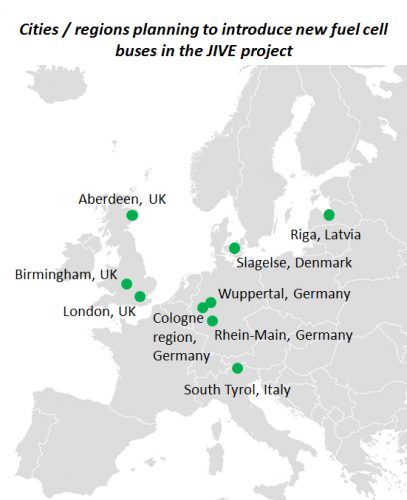 While significant steps have been taken towards reducing emissions from public transport, e.g. shifts towards cleaner diesel engines and adoption of low emission technologies, internal combustion engine vehicles remain the main choice in most locations across Europe. Electrification of transport – battery electric buses and fuel cell electric buses – is the only option for continuing to satisfy demand while also decarbonising the sector. Hydrogen fuel cell buses have emerged in recent years as one of the only zero-emission alternatives to diesel buses, with the advantage that they do not compromise operations, productivity or quality of service. Furthermore, hydrogen-based transport solutions are fully consistent with the wider transition from fossil fuels to renewable energies, as various production pathways exist – including electrolysis – that can support increased uptake of renewable electricity generation.

The ability of fuel cell buses to meet the needs of operators in demanding daily service duties has been demonstrated through a variety of previous and ongoing projects. The Clean Hydrogen in European Cities project (CHIC), for example, deployed 56 fuel cell electric buses along with associated refuelling infrastructure in eight cities between 2010 and 2016. Many of these vehicles continue to operate in daily service. The project successfully demonstrated that fuel cell buses can offer a solution for cities to decarbonise their public transport fleets, improve air quality and reduce noise levels. Specifically, the CHIC project has demonstrated that fuel cell buses can offer the following:

Further details are available from the project’s final report2.

Looking to the future: A shared vision for the 2020s

Initiatives to date have led to tens of fuel cell buses being introduced to Europe as part of small-scale demonstration fleets. While these provide valuable validation of the technology, larger scale uptake is required in order for the full benefits to be realised, which in turn requires further reductions in ownership costs of these zero-emission vehicles. In this context, a group of industry representatives and public transport stakeholders set out a vision for the commercialisation of fuel cell buses3 over the coming decade. This study identified that increasing scale could unlock the cost reductions needed to enable fuel cell buses to play a major role in delivering zero-emission public transport. It also sets out a vision for approximately 400 fuel cell buses to be operating in Europe by the early-2020s and many thousands by the middle of the next decade.

The JIVE (Joint Initiative for hydrogen Vehicles across Europe) project is the next step towards commercialising fuel cell buses in Europe, with 139 new zero-emission buses and associated refuelling infrastructure to be deployed across five countries. This will more than double the number of fuel cell buses in Europe and provide the foundations for further uptake of this technology. JIVE will run for six years from January 2017 and is co-funded by a €32 million grant from the FCH JU (Fuel Cells and Hydrogen Joint Undertaking) under the European Union Horizon 2020 framework programme for research and innovation.

The overall objective of JIVE is to advance the commercialisation of fuel cell buses through large-scale deployment of vehicles and infrastructure. By the end of the project the aim is for fuel cell buses to be commercially viable for bus operators to include in their fleets without subsidy, and for local and national governments to feel empowered to regulate for zero-emission propulsion for their public transport systems.

JIVE will introduce new fleets of fuel cell buses into urban and regional bus operations on an unprecedented scale. This will be made possible by multiple cities and regions collaborating in joint procurement processes, leading to relatively large orders for buses with common technical specifications being presented to the market. Joint procurement exercises are now underway in the UK4 and in Germany5, with similar processes in other European regions to follow. The first bus orders are due to be placed before the end of 2017, with vehicles expected to be delivered from 2018. 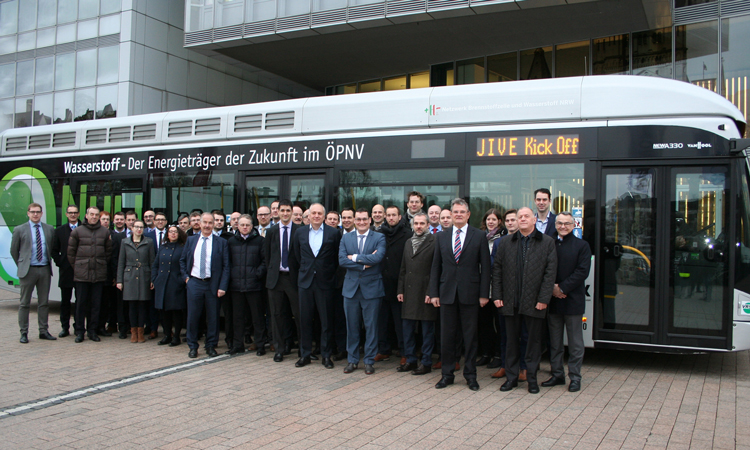 Ben Madden, Director of the Project Coordinator Element Energy, said: “The JIVE project will make a major contribution to expanding the market for zero emission buses in Europe. This initiative will pave the way for fuel cell technology to enter the mainstream bus market and allow hydrogen-based solutions to make a meaningful impact in addressing many of the environmental challenges faced by cities across Europe.”

Jorgo Chatzimarkakis, Secretary General of Hydrogen Europe, in charge of the dissemination said: “Fuel cell buses are at the forefront in hydrogen and fuel cell technology developments and we are very proud to support the JIVE project and to promote hydrogen technologies towards the wider public and stakeholders”.

The JIVE project provides the foundations for the continued growth of Europe’s fuel cell bus sector.  Follow-on initiatives to introduce additional vehicles in other parts of Europe are now being planned. By working together over the coming months and years, bus suppliers, public transport authorities and operators can realise the vision of fuel cell buses becoming a mainstream choice delivering zero-emission public transport across Europe.

The project has received funding from the Fuel Cells and Hydrogen 2 Joint Undertaking under grant agreement No 735582. This Joint Undertaking receives support from the European Union’s Horizon 2020 research and innovation programme, Hydrogen Europe and N.ERGHY.

Sabrine Skiker is Communication and EU Policy Manager at Hydrogen Europe. She is leading the JIVE dissemination and has been involved in the fuel cell bus sector since 2013.