Arnaud Julien, Keolis’ Innovation and Digital Director, introduces the technology behind the autonomous shuttles that Keolis and NAVYA have collaborated on since 2016. In this article he explains how that technology enables the shuttles to operate without a human driver, while providing safe and comfortable travel to passengers. 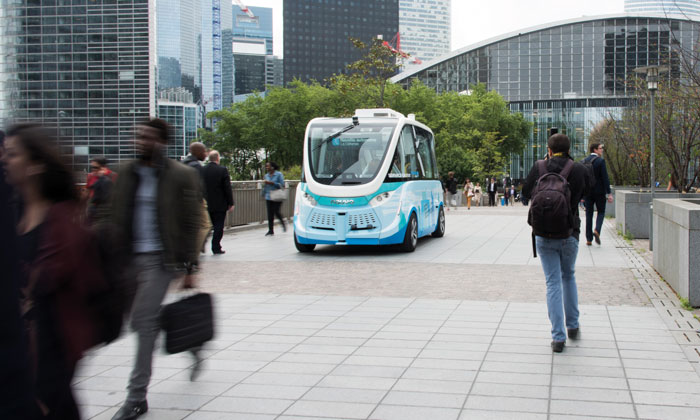 When we refer to smart cities or smart mobility, autonomous vehicles are usually mentioned as being the mobility solution of the future. With technological innovations, digitalisation, and advances in automation technology, however, we’ve already seen the emergence of autonomous vehicles for private and public use, meaning that the future is not too far away. In September 2016, Keolis partnered with NAVYA, a French technology company that specialises in autonomous transport systems, to launch the first electric autonomous shuttles in Lyon, France. Since then, the vehicles have been launched in other parts of France and also abroad. In North America, the vehicles have navigated the streets of Las Vegas as part of the 2017 Consumer Electrics Show (CES), and in May 2017, the autonomous electric shuttle went to Montréal for the Global Public Transport Summit (UITP). Following the unveiling, an announcement was made by Keolis, NAVYA and Urbis (Transport Urbain Les Moulins) to implement Quebec’s first pilot project into the Urbis network in Les Moulins municipality of Quebec, situated to the north of Montréal. A mobility solution for the future, the autonomous electric shuttle offers an easy, fast and efficient transport option for the first and last mile of passenger journeys. Designed with no requirement for heavy infrastructure, the shuttle integrates seamlessly into compre – hensive multimodal public transport systems, thus improving the efficiency of networks. This solution is also ideal for use in such places as airports, hospitals, university campuses, amusement parks, industrial sites and shopping centres.

The future is closer than ever before

Autonomous technology is gaining momentum. Connected vehicles with increasingly sophisticated driver aids on-board are already a reality. There are currently five levels of autonomy for vehicles:

NAVYA’s electric autonomous shuttle operated by Keolis is an autonomy level five vehicle, featuring technology that enables the vehicle to operate autonomously without a driver on-board. The technical design of the shuttle sits on three transversal pillars: perception, which allows the vehicle to understand its environment; decision making, enabling the vehicle to navigate a fixed itinerary or trajectory; and navigation, which allows the vehicle to take the optimal route. The shuttle has built-in artificial intelligence enabling it to drive itself on a pre-programmed track and operate in set areas. Autonomy is possible thanks to real-time sensors that can communicate between themselves and pool their data to make the best decisions when navigating a journey.

To run with full autonomy, the shuttle features state-of-the-art technology. Lidar radars provide 2D/3D perception, enabling precise positioning and ensuring obstacle detection even in the dark. For increased safety and precision, stereovision cameras are also placed on the front and back of the vehicle allowing it to ‘see’ its surrounding environment accurately and detect obstacles. The high number of sensors on the shuttle enables it to operate in total safety. The shuttle is equipped with a GNSS Antenna, which ensures an accurate position reading to the nearest centimetre. Additionally, the shuttle’s tyres are equipped with odometers to analyse their rotations and confirm the vehicle’s movements and position.

The autonomous shuttle proposed by Keolis and NAVYA is 100% electrically powered. Its engine is cleaner than hybrid or thermic motors and is also quieter. No heavy infrastructure is needed to operate and recharge the vehicle, as its batteries can be recharged by means of induction or standard wall plug. Once charged, the vehicle can operate for up to 11 hours depending on traffic and weather conditions. While it is mechanically capable of travelling at speeds of up to 45km/h, operationally it averages 20-25km/h. The vehicle is compact in design and offers maximum space for passengers. At nearly 5m-long and 2m-wide, the shuttle can carry up to 15 passengers on board (11 seated and four standing). It features a wheelchair access ramp and dedicated space for wheelchairs and strollers, making the shuttle an ideal solution for passengers with reduced mobility.

To ensure safe, reliable and comfortable operations, Keolis and NAVYA have been trialling the electric autonomous shuttles under real-life operating conditions since September 2016. The vehicles have safely and comfortably carried over 16,000 passengers in Lyon. Locations at which other trials have been conducted, or are currently underway, include Las Vegas (US), Aalborg (Denmark), Victoria (Australia) and la Défense (near Paris, France), which is the busiest business district in Europe. The shuttle service in La Défense, which launched in early July 2017, provides a new first- and last-mile mobility solution for 500,000 people every day, stopping at key sites along the central, pedestrian-only esplanade. In light of the high volume of pedestrians present along this route, the shuttle runs at an average speed of 7km/h. While the autonomous shuttles have been trialled with a trained conductor on-board, they will operate in La Défense without personnel on-board by the end of the year.

Following the unveiling of the autonomous electric shuttle at the UITP event in May 2017, an announcement was made by Keolis, NAVYA and Urbis to implement Quebec’s first pilot project into the Urbis network in Les Moulins municipality of Quebec situated to the north of Montréal. The region includes the cities of Terrebonne and Mascouche and has a population of approximately 160,000 people. This will be a one-year pilot project to complement the region’s existing public transport network, and marks the first time that a driverless vehicle will be used in daily transport operations servicing the first and last mile of passenger journeys in the heart of the North American continent. The pilot project, a continuation of Keolis and NAVYA’s partnership, responds to Les Moulins Regional County Municipality’s (RCM) aim to prioritise environmentally friendly transport modes and reduce green-house gas emissions. The pilot project of NAVYA’s autonomous electric shuttle will see Urbis operate an equally environmentally friendly vehicle. With capacity for up to 15 passengers, the shuttles produce no green-house gases, are extremely quiet to run, and offer impressive comfort levels for passengers. Steps are currently being taken with the appropriate Quebec authorities to implement the initiative. More than 10 trials are presently being conducted by Keolis and NAVYA around the world, and more than 170,000 passengers have commuted on the shuttles so far. Shuttle trials have been successful up to now, but have also offered an opportunity for fine-tuning. For example, the shuttle can now honk when a vehicle is stopped in the middle of the road for no particular reason, or when there is a pedestrian in its path. Partnering with innovative companies such as NAVYA enables Keolis to develop and offer the mobility of the future. In the case of the autonomous electric shuttle, further developments lay ahead. Continuous improvement of the vehicle’s sensors and further trials at higher speeds bring day-to-day autonomous shuttles closer to being part of our real daily traffic with other vehicles and, perhaps one day, they will even be seen on our motorways.

Arnaud Julien has been the Innovation and Digital Director of Keolis since October 2015. In his role, he defines and implements the group’s digital strategy and manages its innovation policy. Arnaud has 22 years’ experience in the innovation and digital fields.