With mobility solutions provider NAVYA recently demonstrating the fully autonomous ARMA shuttle at London Heathrow Airport for the first time in the UK, Intelligent Transport questions whether autonomous vehicles can complete the transport jigsaw in populous towns and cities. 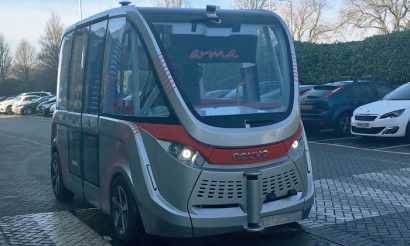 The UN predicts that by 2050 almost 70 percent of the world’s population will be living in towns and cities. This rapid urbanisation is expected to have a detrimental impact on road traffic flow. Encouraging inhabitants make the switch from private vehicles to traditional public transport is part of the solution however, it may not be the answer when it comes to ‘last mile zones’. To fill this gap, mobility solution providers are developing driverless, automated electric vehicles which could in future be a dynamo in developing Mobility as a Service (MaaS).

Furthermore, there have already been acquisitions for use on private property including airports and power stations, delivering frequent transport from A to B and time efficient services for business.

This is all well and good, but there are obstacles to overcome such as educating the public on using the service and operating in public spaces, the fear of driver job losses and perceptions of safety.

In January 2017, NAYVA presented its autonomous ARMA shuttle at the London Heathrow Airport Electric and Autonomous Showcase. The driverless electric shuttle was deployed for the first time in the UK to showcase its ability to cover distances that are too short to go by car or are too long on foot. 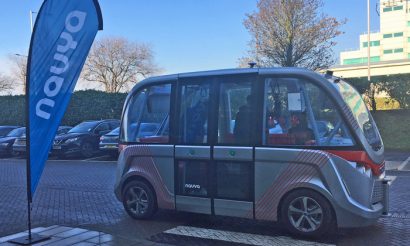 The UK launch follows the recent rollout of the shuttle on public roads in Las Vegas’ downtown Fremont East Entertainment District in the USA. It is also operating at MCity, the University of Michigan’s unique test site for connected and automated vehicles.

The driverless public transport shuttle can carry up to 15 people and reach a top speed of 45km/h; its operating speed is 25km/h. It has a battery life of 8-12 hours and requires 5 hours to charge. The vehicle is completely independent of all infrastructure and is equipped with a multitude of sensor technologies including, Liders, Sterovision cameras, GPS and Odometry, enabling it to map out the environment and detect obstacles in its path. Furthermore, it identifies both fixed and mobile objects in daylight and at night time. At the Heathrow showcase, NAVYA’s engineers mapped and planned the circular route in just six hours. 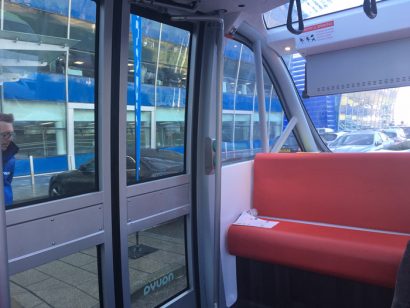 Currently, an operator is required to activate doors and action the vehicle to start the pre-planned route via a touchscreen located within the cabin. However, on NAYVA’s latest model, automatic doors are linked to voice information messages and information videos which help passengers get on and off safely without the need for an operator.

With the UITP recently publishing a paper calling for autonomous vehicles to be integrated within public transport or shared fleets, there might be future concerns over driver redundancy. Commenting on the subject Navya Vice President Sales, Henri Coron said: “We’re addressing the first and last mile which is not provided by any of the public transport operators right now so we are providing a solution that doesn’t exist, so it won’t ‘kill’ jobs.” He went on to say that the technology itself will create and sustain jobs.

The next issue to be addressed is safety. Can autonomous transport gain public trust? And what has the reaction been so far?

There is an argument to suggest that there will be a reduction in the number of accidents on roads because autonomous shuttle reaction times are shorter. However, an insurer survey carried out by KPMG reveals that safety and consumer acceptance is vital before the public adopts autonomous vehicles.

According to CEO of NAVYA, Chistophe Sapet, “Passengers need to be reassured when using new travel systems.

“Our aim is that each trip taken in a NAYVA ARMA shuttle has to be convincing enough to change the habits of the user and reduce the risks linked to traffic flow,” he added.

According to Henri Coron, public reaction to the shuttles has been eye-opening: “It’s amazing how people are reacting, they forget they are autonomous.” He went on to compare the introduction to planes using autopilot saying the public no longer worries about this.

Mr Coron believes public acceptance of the vehicles can be aided by education. “We have to educate people before we can bring these autonomous vehicles to the road.

Safety is of course connected to security and cyber threats are of growing concern. According to the KPMG report, A deadly development? The cyber threat in autonomous vehicles, greater connectivity gives hackers more targets to attack. Connected vehicles interact with the road, other vehicles, and road-signs over a 4G network, which opens them up to a cyber-attack from a remote internet platform. However, the report suggests theft of data is a greater motive for hackers than mass disruption or carnage.

In the case of NAVYA, a monitored server communicates with the autonomous vehicle and vice versa. If there is a threat the company would be able to stop the vehicle immediately.

The future – completing the jigsaw

According to management consulting firm AT Kearney, the autonomous market is said to be worth more than $515 billion by 2035. There is no doubt that investment will continue in the autonomous public transport market. Furthermore, NAVYA’s Henri Coron believes there is the potential to deploy 2,000 autonomous vehicles in the UK on private property alone.

Autonomous public transport has the potential to help reduce congestion in growing towns and cities and reduce harmful emissions by filling last mile journeys. However, electrically charging the vehicles from non-polluting sources for an achievable cost is the ultimate goal.

Educating the public on the benefits of autonomous vehicles will be crucial in completing the public transport jigsaw. Moreover, pedestrian, cyclist and other vehicle user behaviours will need to adjust to their deployment on public roads – trust is a key issue.

Henri Coron concludes: “For people not to use their car downtown you have to provide these first and last mile solutions.