Paris now and the future 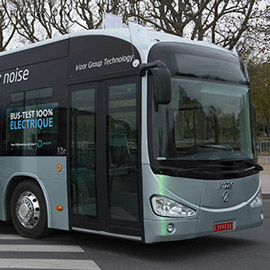 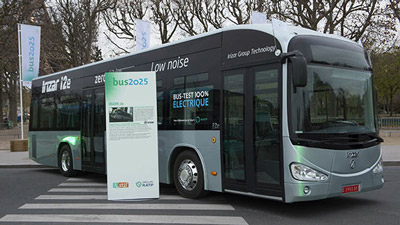 The public transport system in Paris has witnessed some significant changes over the past few years and those changes are continuing, however the focus has previously been on the metro system as reported in my previous blogs, but the new changes will now directly affect the bus operations.

I recently attended a meeting of the EU funded CITYLAB project where Jean Louis Missika, deputy mayor for urban planning at Paris city council,  set the scene for the direction of travel for the city council in regards to both congestion and air pollution in the city. Initially he told me that all pre-2001 cars are now banned from the city and that they were going further and will ban ALL diesels from 2020 onwards; that covers cars, vans buses and trucks. Furthermore, that will cover not just Parisian vehicles but ALL vehicles from anywhere in the EU.

Paris ban on all diesels from 2020 onwards

This will of course have a major impact on coach services into and out of the city as well as delivery vehicles. What was not clear was how these visitors were going to get into the city from 2020 onwards; unless they are to be dropped off in the outskirts and transferred to compliant vehicles, which will either be driven gas engines or electric power. I am not sure that visitors with suitcases etc. would be willing to undergo this sort of transfer, especially the more elderly traveller.

Mr Missika did admit that people had said that he must be joking but he and his colleagues told them that they were serious in their proposal. Operations will probably take place in 2023 or 2025, which is probably more likely. He also spoke about freight traffic which will need to meet the same criteria. This could see the use of a lot more smaller vehicles, probably increasing congestion significantly?

Following the session with Mr Missika, I contacted the local transport operator RATP – owner of Yellow Buses in Bournemouth, London Sovereign and London United bus companies, The Bath Bus Company, Manchester Metrolink, The Original Tour and Selwyns travel of Runcorn here in the UK. RATP is a state owned company which provides both the bus, metro, tram and Line A & B regional express railway (RER) services in Paris; I was able to secure a copy of their Bus2025 plan for the future of the fleet in the city.
Introduction of Bluebird electric buses

The plan was developed after STIF (The autonomous regional transport body responsible for the Ile-de-France area) committed to eliminate diesel powered vehicles from its network in the region. The first manifestation of the plan is that RATP have introduced 23 Bluebird 12 metre long 100% electric buses into service on Line 341, which run between Charles de Gaulle-Etoile and Port de Clignancourt, a distance of around 6 miles in total. The buses will be recharged in the Belliard depot overnight so as to reduce the load on the electricity supply grid as they have a range of around 180Km (112miles) This initiative has also attracted funding from the EU under the ZeEUS project [Zero Emission Urban Bus System] which is designed to assist cities to introduce electric buses to their fleet.

The outcome of the plan is that all 4,500 buses will be powered by either electricity or bio-gas by 2025; the split will be 80% electric buses (3,600 in total) and 20% on bio-gas (900 in total). As there are still insufficient manufacturers that can currently meet all of the technical and economic constraints of operating full-size electric buses within a dense urban environment, RATP has invested in hybrid buses. The current order for hybrids stands at 523 and of which 63 are in service and the remained will be in circulation by the end of 2016.

While I was in Paris the city was in full sunshine with only an occasional shower but what a difference a week makes. Since I left the city the rainfall has increased and the river seine has risen over six metres from its normal height. This led to a number of metro stations being closed and the RER B line suspended from service and the river bank I had strolled along was under water as was the high speed road on the north bank. In addition to this the river traffic was suspended due to the lack of clearance under the bridges. The effect of this was that travellers in the city were finding it difficult to travel around the city but, the buses were still running even if some of the driver’s had to improvise as the road became flooded. 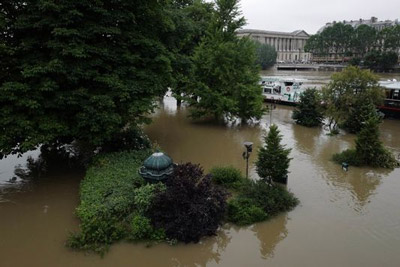 The river Seine in flood

The metro system had 140Km of tunnels under potential threat from flooding had the Seine risen above 6.6 metres. However, the water level receded before that point was reached allowing the metro to continue operating.