Careem will operate a total of 1,750 bicycles and 175 stations during the first two years of the contract, which will rise in the next five years to 3,500 bikes and 350 stations. 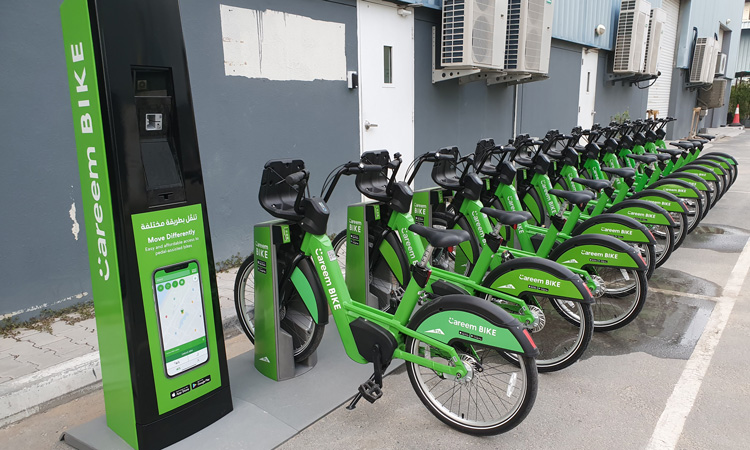 Dubai’s Roads and Transport Authority (RTA) and Careem have officially launched the service of renting bicycles, which is said to be the first of its kind in the region. 780 bicycles and 78 bike stations will be provided in the first phase, distributed in different regions of Dubai.

His Excellency Mattar Mohamed Al Tayer, Director General and Chairman of the Board of Directors of the RTA, Muddathir Sheikha, the founding partner and Managing Director of Careem, and Ahmed bin Sulayem, CEO of the Dubai Multi Commodities Center, inaugurated the service at the bicycle station in the Jumeirah Lakes Towers area, in the presence of a number of Authority executives and company officials.

Careem has reportedly employed the latest smart systems to track bicycle locations and connect them to GPS, and can predict areas with high occupancy rates. Users can access the service using the application, which allows them to decode their bike by scanning the QR code on the bike hull or by entering the five-digit code from the application at the bicycle parking station.

Al Tayer said: “The service contributes to enhancing sustainability in Dubai and encouraging residents and tourists to enjoy a healthy and active life through providing transportation options and improving movement within societies. It also contributes to supporting the authority’s efforts to achieve integration between the various means of transportation, by promoting flexible transportation trips. The service is integrated in safe and comfortable ways with daily transportation, with the aim of reducing the use of private vehicles and switching to the use of other more sustainable means of transportation, which contributes to supporting the efforts of the Dubai government to reduce energy consumption, reduce pollution, provide a healthier and happier environment, and provide short trip services that help users of mass transit to reach their final destinations.

Sheikha added: “We are very excited and excited by launching the first programme of its kind consisting of several stages at the regional level in cooperation with the Roads and Transport Authority, and we thank the actors in society that played a prominent role in supporting this initiative – it helped us provide our services to residents and visitors alike.

“We value the great efforts made by the Roads and Transport Authority in the success of this project, and we appreciate the efforts made by our partners in (Wasl Properties) and (Emaar), Dubai Multi Commodities Center, (TECOM), and Dubai Holding, to implement this project on the ground.”