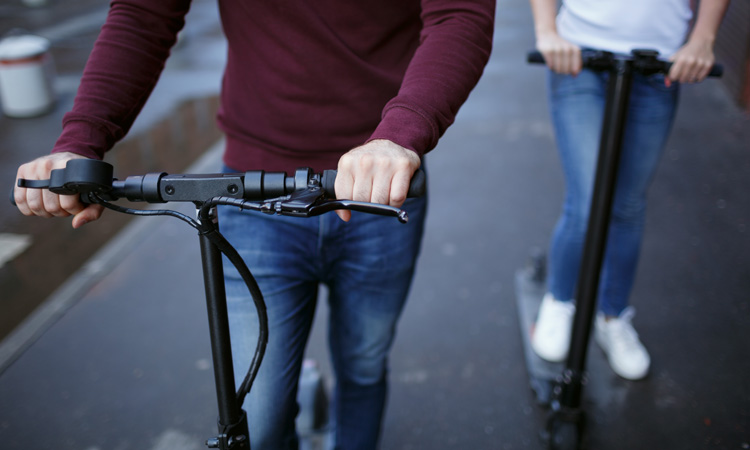 At present it is forbidden to ride an e-scooter anywhere in the UK other than on private land with the landowner’s permission. Riders face a £300 fixed-penalty notice and six points on their driving licence. As the law stands, riding an e-scooter on the pavement is an offence against the Highway Act of 1835, while riding one on the road is an offence against the Road Traffic Act 1988 unless you have a driving licence, insurance, helmet, road tax, registration plate and lights.

The rise in the popularity of e-scooters is said to be reflected in online trends. The number of monthly Google searches for ‘electric scooters’ was 135,000, and 14,800 for ‘e-scooters’ – both reportedly rising 22 per cent in the past 12 months.

The term ‘e-scooter online’ saw a 12,900 per cent increase in searches over the past 12 months.1 The majority of these searches reportedly took place in September and October 2019, suggesting that e-scooters might have been purchased in preparation for the Christmas period.

According to Sky News, Since the start of 2018 there have been more than 1,600 incidents involving e-scooters, hoverboards and Segways. Although these figures do include reported thefts and non-crime incidents related to these vehicles, they also include accounts of highway disruption, road traffic collisions and other road-related offences.

The Department for Transport (DfT) has reportedly said that it will spend £90 million to test ideas to improve journeys.2 This includes reviewing and exploring e-scooters, along with other forms of micromobility to see if they should be allowed on our public highways, as disclosed in Future of Mobility: Urban Strategy.

A recent survey3 has suggested that nearly 40 per cent said they agreed e-scooters should be legalised for use beyond private land. After an increase of sales for e-bikes in 2019 (between 50,000-60,000 were purchased) which are further forecast to rise in 20204, there is potential for e-scooters to follow suit, depending on the law.

Making the most of MaaS during and after COVID-19

How can we ensure micromoblility remains safe?