With a driver on board in case of emergencies, Singapore has begun the first on-demand autonomous shuttle trial which marks a major milestone in real-world testing. 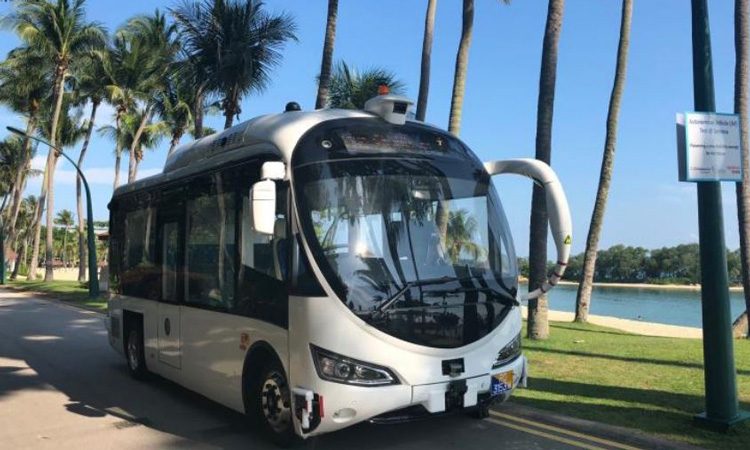 Singapore’s first on-demand autonomous shuttle public trial has been officially launched at Sentosa, marking a major milestone since on-road testing of the autonomous shuttles began in June 2018. The public trial will run from 26 August to 15 November 2019. Members of the public visiting Sentosa will be able to hail an autonomous shuttle via the Ride Now Sentosa mobile app or at kiosks along a 5.7km route to bring them to selected destinations on the island, such as Siloso Point, Beach Station, Palawan Beach, Tanjong Beach and Sentosa Golf Club.

Developed by the Land Systems arm of ST Engineering in partnership with the Ministry of Transport (MOT) and Sentosa Development Corporation (SDC), four autonomous vehicles (AVs), comprising two minibuses and two smaller shuttles, will be deployed for the trial.

The trial service is supported by ST Engineering’s Autonomous Vehicle Management System, which analyses passenger demand and optimises route management for ride-sharing. The AVs come equipped with various technologies such as radar, LiDAR (Light Detection and Ranging), GPS (Global Positioning System), odometry and computer vision, to help them sense their environment and identify appropriate navigation paths, obstacles and signages. This enables the AVs to navigate mixed traffic environments as well as handle a range of complex environments, such as roundabouts. Each trial AV has undergone a rigorous safety assessment jointly administered by the Land Transport Authority, the Traffic Police and the Centre of Excellence for Testing & Research of AVs-NTU (CETRAN) to demonstrate its ability to handle basic manoeuvres and stop safely upon detecting an obstacle.

Permanent Secretary for Transport and Chairman of the Committee on Autonomous Road Transport for Singapore, Loh Ngai Seng, said: “Autonomous vehicle technology has the potential to transform our public transport system and the way we move around in the future. This trial will provide important insights into commuter experience and the interaction of AVs with other road users, as we seek to enhance urban mobility by deploying AV technology safely in our towns.”

Quek Swee Kuan, Chief Executive Officer, Sentosa Development Corporation, said: “The trial of on-demand autonomous shuttles reflects SDC’s commitment to creating great experiences, and is part of our multi-pronged effort to explore solutions that enhance the accessibility of our diverse leisure experiences. As we embark on Sentosa’s next phase of development, we will continue to collaborate with various partners to test-bed new and innovative ideas, to strengthen our appeal as a world-class holiday destination for both locals and tourists.”

Lee Shiang Long, President, Land Systems of ST Engineering, said: “The Sentosa shuttle trial marks a significant step towards the operationalisation of autonomous vehicles in Singapore. Leveraging the Singapore AV R&D ecosystem, we have grown considerably in terms of building up our autonomous capabilities, from adapting the vehicles to navigate roundabouts and operate in mixed-traffic and rain conditions, to developing software for a mobile app to allow passengers to hail an on-demand shuttle.”