City Rail Link Ltd continues commitment to transform public transport in Auckland with the signing of a contract with the Link Alliance to build the main stations and tunnels programme of work for the City Rail Link (CRL). 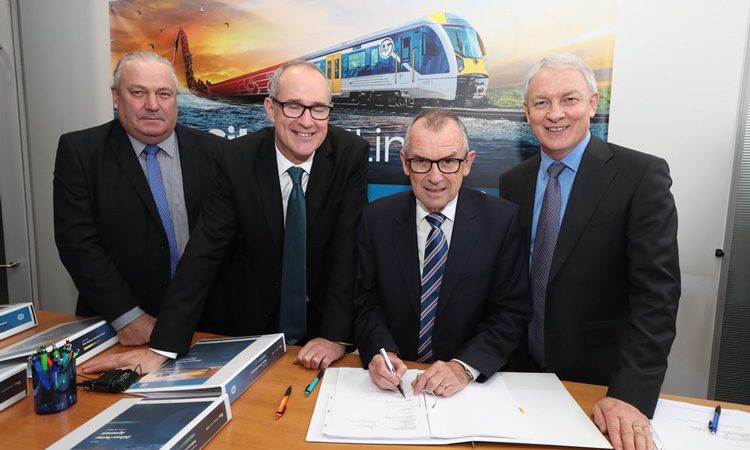 Twyford says the signing is significant  for Auckland and for New Zealand, he commented: “Given the competition world-wide to build infrastructure, the whole country can take pride in the fact that such a high calibre of international companies want to come here and help build a better future for New Zealand.”

Goff said: “It will double the capacity of our rail network, reduce travel times into and through the central city, and help take cars off the roads, as well as driving investment in our region. The signing of this agreement will help ensure the delivery of the world-class transport system our city needs. With the population of Auckland growing by 40,000 a year and public transport journeys exceeding 100 million in the past year, the completion of CRL can’t come soon enough.”

Signing the Project Alliance Agreement  (PAA) formally clears the way for the three construction companies and three design companies in the Link Alliance, together with CRL Ltd, to start work building two new inner-city underground stations, upgrading the existing Mt Eden station, and completing tunnel  construction. It is the single biggest programme of work for CRL,  known as the C3 contract.

City Rail Link Ltd’s Chief Executive, Sean Sweeney, said: “Our signatures drying on the PAA represent a significant milestone not only in the history of this project, but for Auckland’s future as well with the delivery of a modern rail network.”

Sweeney says the companies have a proven record of delivering large and complex infrastructure. He continued: “Aucklanders can be confident that a project transforming the way they travel, live and work will be delivered to a high standard, on time in 2024, and on budget, leaving behind an outstanding legacy for the city.”

The Chairman of the Project Alliance Board, Pierre Bourgeois, says the Link Alliance is proud and excited to be delivering a landmark project for Auckland.

Bourgeois said: “As a truly international team with members from more than 25 countries, we look forward to working alongside local communities to safely construct the City Rail Link over the next five years. Together with CRL Limited, we are committed to realising the outstanding legacy CRL will leave for New Zealand’s biggest city.”

The PAA and other project-related documents were signed inside the Chief Post Office heritage building in central Auckland, whose 4000 tonnes of 106-year-old masonry is being suspended on temporary foundations above the construction of a section of the tunnel below it.

The signing follows CRL Ltd’s announcements in April 2018 of the Link Alliance as its preferred bidder, and details of a $1 billion increase in the project to $4.4 billion after a rigorous and comprehensive review of project costs. The project’s two sponsors – The Crown and Auckland Council – subsequently approved CRL Ltd’s request for additional funding.

To ensure project momentum was not lost, the Link Alliance began work on a $75 million Early Works Contract while commercial and legal negotiations continued to finalise the PAA.