Examining risks and reviewing responsibilities: are e-scooters worth the hassle?

To improve safety, cities should adopt policies that induce a shift from car trips to safer, smaller-scale modes of travel or transit. Are e-scooters the answer? 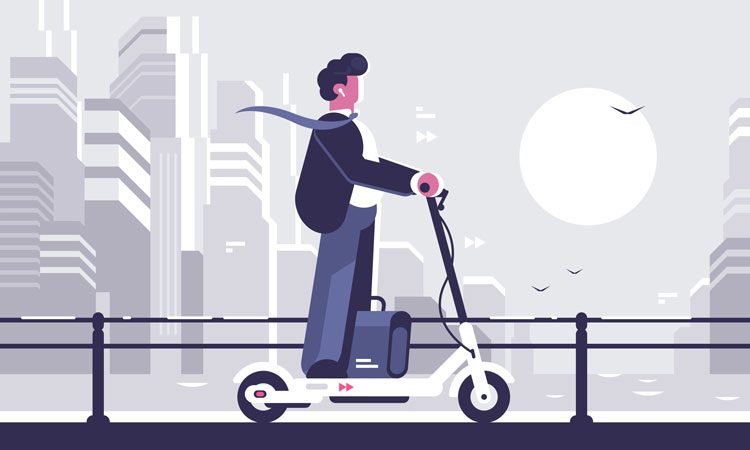 The e-scooter operator, Bird, has released a safety report which examines risks, reviews responsibilities, and prioritises prevention. The report details how cities and operators can make the roads safer for all users, from cars and trucks, to bikes and scooters. Three main areas were focused on to ensure the roads are as safe as they can be.

e-scooters and bicycles have similar risks and vulnerabilities

Both Bird’s internal data and independent research suggested that scooters and bicycles have a similar injury rate. A number of recently released independent studies are augmenting the understanding of injury risk associated with shared e-scooters. Consistent with Bird’s internal data, these independent studies also point to parity with cycling when it comes to safety measures. The report details that bike-friendly cities equate to fewer e-scooter injuries.

Car accidents accounted for more than 6,000 pedestrian deaths in the U.S. in 2018 alone. It is troubling that pedestrian fatalities rose by 27 per cent from 2007 to 2016, while other types of traffic deaths dropped by 14 per cent1. Data across U.S. cities indicate that e-scooters are replacing a significant portion of car trips: on average, 30 per cent of Bird rides are trips that would have otherwise been taken by car. Solutions that replace car trips with safer modes of travel have the potential to contribute to a safer environment. Options like Bird that help connect riders to transit can help displace long car trips as well.

Operators and cities alike must act to improve safety

Bird and other operators have a responsibility to safety that must be fulfilled. Cities can improve safety for e-scooter riders by maintaining smoother streets, managing car and truck speeds, reducing car trips and achieving safety in numbers. Above all, cities must be designed for safety. Bird’s rider surveys uncover a strong demand for protected bike lanes and better maintained streets. Experience from several cities show that bike lanes and other Vision Zero-related infrastructure investments effectively reduce crash risk for all road users2.

The report concluded with five safety steps for cities to implement, with a hope of protecting the most vulnerable. These included:

The majority of fatalities and severe injuries sustained by vulnerable road users (VRUs) are caused by motor vehicle impacts3. A large body of independent research has demonstrated that for VRUs, protective road design and infrastructure are likely to be the most important factors in limiting serious injuries4. ‘Complete Street’ infrastructure that provides VRUs dedicated space and physical protection, such as protected bike lanes, have been proven to reduce traffic casualties by up to 90 per cent5. In New York City, protected bike lanes and pedestrian refuge islands that were installed on major avenues in Manhattan reduced traffic injuries to all road users by 37-58 per cent6.

Street conditions play a key role in crash prevention. While severe injuries and fatalities are more likely to involve motor vehicle collisions, minor cyclist injuries are more likely to be caused by “rider only” crashes that do not involve direct collisions with cars but rather are caused by the rider veering to avoid a motor vehicle, cyclist error, poor visibility or unsafe pavement conditions7. Potholes, uneven surfaces and other pavement irregularities are a leading cause of bicycle crashes8, and it is likely the same will prove true for e-scooters.

Speeding is a leading cause of death and injury on urban streets. According to Injury Epidemiology, “Vision Zero: a toolkit for road safety in the modern era”, vulnerable road users, such as pedestrians or cyclists, should not be exposed to vehicles at speeds over 30km/h (18.6mph). If separation is not possible, then reduce the vehicle speed to 30km/h. Cities that have adopted 25mph or lower speed limits and enforced with safe street design and automated enforcement have reduced vehicular speeding and pedestrian injuries. In New York City, speeding was reduced by 63 per cent and pedestrian injuries by 23 per cent9.

The biggest threat, by far, to pedestrians and other VRUs comes from cars and trucks. In 2017, around 6,000 pedestrians were killed by cars in the U.S., or two people every three hours10. Additionally, another 100,000 more were sent to emergency departments11. The risk to pedestrians involved in car crashes of being killed is 150 per cent greater than that to the vehicle occupants12.

Peter Jacobsen coined the term “safety in numbers” in research published in 200313, which documented: “The likelihood that a given person walking or bicycling will be struck by a motorist varies inversely with the amount of walking or bicycling.” The force behind “safety in numbers,” according to Jacobsen, is motorists’ expectation of encountering cyclists and pedestrians, which rises with increased prevalence of cyclists and pedestrians. Safety in numbers is a part of leading municipal Vision Zero policies. As the City of Philadelphia stated in its own Vision Zero policy: “Successful Vision Zero programmes recognise that there is safety in numbers, that increasing numbers of people walking and biking make these activities safer, as well as improve the health of a city.”14 New York City, which adopted and implemented Vision Zero several years before Philadelphia, stated in its 2018 Vision Zero year four report: “As the number of regular bicyclists has increased cycling has gotten dramatically safer, potentially showing a safety in numbers effect.”15