Cargo bike delivery schemes could save between 300-450 lives per year in the capital through the reduction in dangerous NOx and PM2.5 emissions. 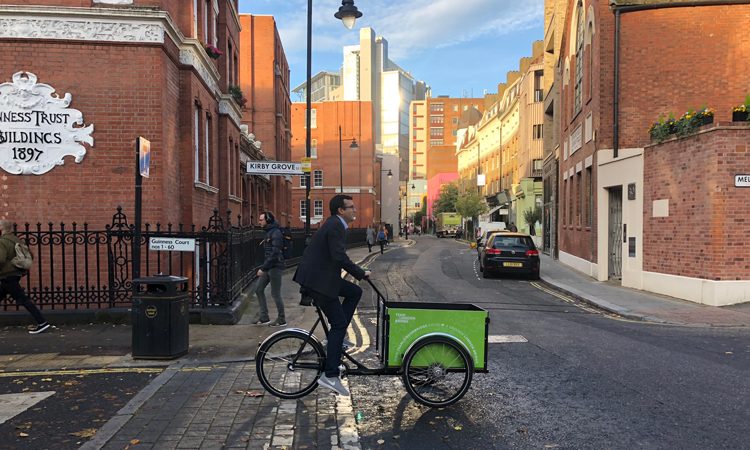 An ambitious scheme to get 15 per cent of all businesses to switch central London deliveries to cargo bikes has launched in London Bridge, ahead of the introduction of the Ultra Low Emission Zone (ULEZ).

Backed by TfL, Bikes for Business will target 60 businesses in London Bridge to ensure they are prepared for the introduction of the new low emission zones and to help the Mayor of London hit ambitious targets to reduce the number of vans and lorries in central London by 10 per cent by 2026.

Chief Executive of Team London Bridge, Nadia Broccardo, said: “As the Business Improvement District for London Bridge, Team London Bridge is committed to getting business to switch to cargo bikes. The introduction of ULEZ on 8 April and our Bikes for Business subsidy is a real opportunity to rethink how best to move freight over short distances in the capital. From groceries to medical supplies, cargo bikes can help businesses cut costs and journey times, as well as pollution that is blighting life in London.”

Switching to cargo bike deliveries now will future proof business freight services, aligning with the Mayor’s aims to deliver zero emission zones in town centres from 2020 and in central London by 2025, ensuring the business is prepared, able to test suppliers and avoid any disruption come 2025.

Businesses who have previously taken up cargo bikes for deliveries report a positive response from customers who increasingly recognise the urgency of reducing pollution in London.

David Lawson, Guy’s and St Thomas’ NHS Foundation Trust, said: “At Guy’s and St Thomas’ NHS Foundation Trust, we need to ensure critical deliveries every day across our central London hospital and community sites. With a cycle path on our doorstep, we are looking to trial cargo bikes in partnership with our pathology provider, Viapath. This is part of a wider consolidation strategy to design out 90 per cent of freight deliveries into the Trust to improve air quality across the communities that we serve.”

The adoption of cargo bikes could bring significant benefits to London as a city:

Lilli Matson, TfL’s Director of Transport Strategy, said: “We’re working closely with businesses and business groups such as Team London Bridge to encourage people to think about cleaner, safer and more efficient ways of moving goods. Cargo bikes have real potential to help clean up London’s toxic air and it’s fantastic to see Team London Bridge’s bold ambitions for cycle freight ahead of the launch of our Ultra Low Emission Zone later this month. We’re investing in schemes such as this right across London as work towards the Mayor’s ambitious targets for reducing the numbers of vans and lorries entering central London by 10 per cent over the next six years.”