The new ‘stackable’ mode of transport is expected to help reduce congestion and pollution, whilst complementing public transport. 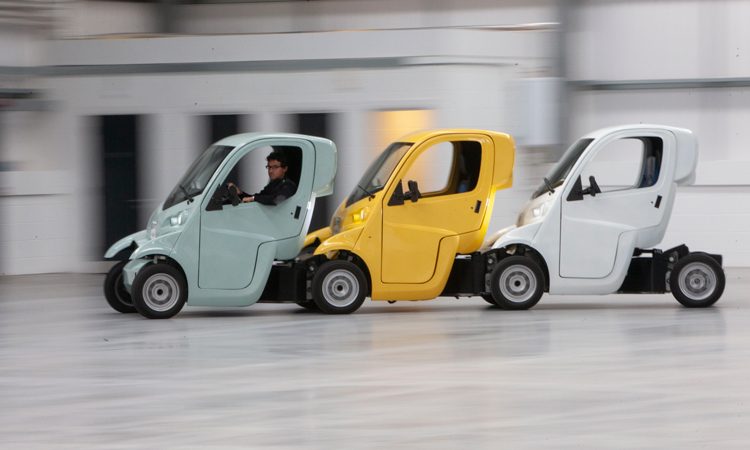 A next generation public transport system that uses a stackable design, similar to that used for shopping trolleys, has undertaken the latest stage of its development and testing.

ESPRIT, an innovative mobility system designed to allow people to make use of small, electric vehicles for short trips between two locations, is a leading project in the European Commission’s Green Vehicles Sub-Programme of Horizon 2020.

The lightweight, ‘L’ category electrical vehicles are designed for short journeys in areas of high population. They can be stacked together to save space, allow multiple vehicles to be charged from one facility and enable vehicles to be driven in a ‘road train’.

The vehicles have a range of approximately 50km and would be picked up and dropped off at ESPRIT stations, where the vehicles would charge whilst unused. The stations would be located close to transport interchanges to encourage ESPRIT to be used alongside other transport modes, thereby facilitating first-and last-mile connectivity and complementing public transport.

A pioneering coupling system is used which allows up to eight vehicles to form a road train, driven by the lead vehicle’s operator. This key feature supplies the potential for very efficient vehicle redistribution, which is crucial for successful one-way car-sharing systems.

Cabinet Secretary for Transport, Infrastructure and Connectivity, Michael Matheson, said: “To achieve the greener, smarter transformation in travel and transport that the Scottish Government will deliver, car-sharing solutions have an important role to play. Alongside walking, cycling and public transport, developments in car, lift and bike-sharing can only further sustainable travel options by providing viable alternatives to single occupancy car journeys across Scotland.”

One vehicle on its own is 2.3m long, 1.5m wide and 1.9m high, based on an aluminium chassis and polyester fibreglass body. A full charge takes 30 minutes and the vehicle can reach 65km/h.

Dr Richard Mounce, on behalf of the ESPRIT consortium, said: “Transportation to and from city-centres and within suburban areas is increasingly unsatisfactory in terms of congestion and environmental and societal aspects. Solutions to reduce this congestion and pollution must be explored seriously for the benefit of society now and in the future. The ESPRIT concept would contribute to solving these problems.

“With car-sharing schemes expanding throughout Europe, ESPRIT will create a system that provides greater energy efficiency, whilst also reducing congestion as well as noise and air pollution. As part of the ongoing testing of the whole project, members of the public and those in associated industries who would benefit from the ESPRIT system are contributing to its development.

“It is anticipated that this concept will encourage citizens to use conventional public transport and car-sharing solutions rather than their private vehicles, leading to seamless intermodal transport, reduced congestion and significant reduction of noise and air pollution.”

The ESPRIT Advisory Board includes car-sharing organisations, public authorities and transport operators. The project has received funding from the European Union’s Horizon 2020 research and innovation programme under grant agreement No 653395.