The NAVYA Autonom Shuttle will be trialled for 12 months, operating in real traffic conditions, on public roads, coexisting with regular traffic. 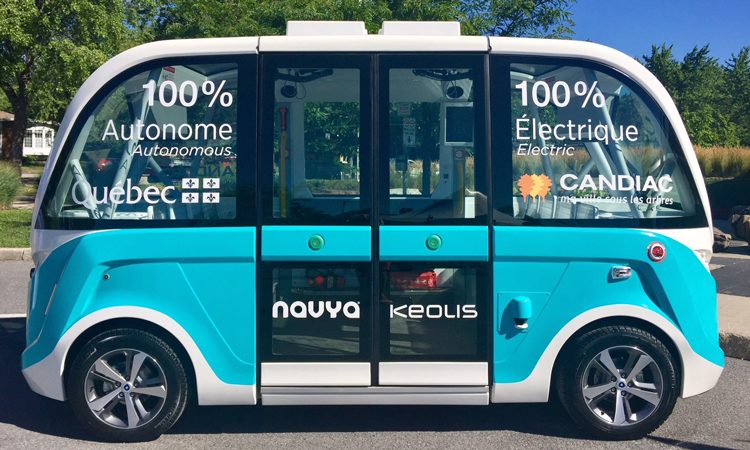 The City of Candiac has announced the arrival of a long-term demonstration project for a 100 per cent electric autonomous shuttle to be used on public roads for the first time in Canada.

This ambitious and innovative project has been made possible by Keolis Canada, NAVYA, the Quebec Government and the collaboration of Propulsion Québec, la Grappe industrielle des véhicules électriques et intelligents du Québec and Technopôle IVÉO.

Starting in September 2018, the autonomous electric shuttle will provide citizens with free transportation between the park-and-ride lot and André-J.Côté Park, travelling along Montcalm Boulevard North. Stops will include the City Hall, the Chartwell Le Montcalm senior’s residence and several businesses.

It is planned for the shuttle to run until winter weather conditions prevent it from doing so. An experimentation phase, with no passengers, will then begin to ensure the shuttle’s performance during the winter season.

The objective of the project, over and above providing additional transportation options, is to contribute to the evolution of autonomous transport technology.

“Candiac places great importance on public and active transport. We are constantly working to provide additional multimodal transportation options while remaining focused on the notions of sustainable development and the smart city. A true showcase of technological advancements, the autonomous electric shuttle project put forth by Keolis Canada and NAVYA is perfectly aligned with our vision in terms of innovation and is at the heart of our 2014–2029 strategic development plan. We are extremely proud to be the first city in Canada to move forward with a project of this nature,” said Normand Dyotte, Mayor of Candiac.