The Midland Metro Alliance, working on behalf of the West Midlands Combined Authority, will begin the next stage of the Birmingham Westside Metro extension in the UK in September 2018. This stage of works will see the Metro line constructed between Victoria Square and Centenary Square. 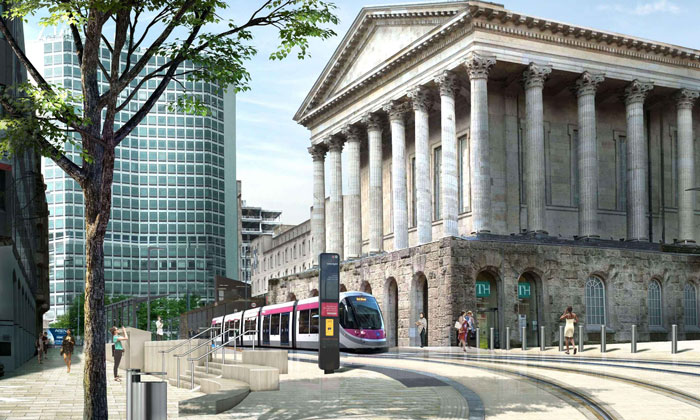 To facilitate the construction phase of this extension, Paradise Circus will close in both directions from Monday 3 September 2018 and remain closed until summer 2019.

The A38 Queensway underpass, which runs beneath Paradise Circus, will remain open in both directions for the duration of the works to allow access to and from the Aston Expressway and M6.

The Birmingham Westside Metro extension follows the Metro extension from St. Chads to Grand Central, which opened for passenger service in May 2016. Once completed, the Metro will operate between Grand Central and Hagley Road in Edgbaston, improving transport links in the heart of Birmingham and making journeys faster and more accessible, which in turn will help businesses and support jobs.

Five new tram stops will connect passengers to Victoria Square, Centenary Square, Brindleyplace, Five Ways and Hagley Road, with links to popular attractions including the Birmingham Museum and Art Gallery, the International Convention Centre and Symphony Hall. This will enable more people to use the Metro in this area for day-to-day travel, reduce road congestion in the city centre, and also improve sustainable transport options along Broad Street and beyond.

Commenting on the extension project, Mayor of the West Midlands Andy Street said: “The continued expansion of the West Midlands Metro network is a real success story for the region and this extension is a major milestone in taking it forward. That we are already at such a key stage in taking it from Birmingham City Centre up to Centenary Square and beyond to Edgbaston is really good news. Inevitably with such a massive engineering project there are going to be knock-on effects to existing traffic as work takes place, but I would urge people who may be affected to consider the bigger picture.

By better connecting our towns and cities we create a transport network that strengthens economic growth, creates jobs, and helps bring greater prosperity to this region.”

Councillor Waseem Zaffar, Birmingham City Council Cabinet Member for Transport and Environment, said: “Birmingham is fast becoming a world-class city and the expansion of the Metro will make it even better, as well as easier for those living, working and travelling here to get around. Whilst works to construct this next stage are ongoing, it is important for people to plan ahead, consider using public transport or retiming their journeys wherever possible.”

The Metro extension is just one of many construction projects taking place in Birmingham City Centre over the summer and the travelling public is being urged to plan journeys in advance, using real-time information to ensure their journeys go smoothly.

Councillor Roger Lawrence, Leader of City of Wolverhampton Council and WMCA portfolio lead for transport, said: “Extensions to the West Midlands Metro are key to ensuring this region has the right transport links in place for the arrival of HS2. The work in Paradise Circus is going have an impact on traffic in that area and I would strongly recommend people use every available resource to plan their journeys ahead. People travelling into the city centre can also play a part by asking themselves if they really need to use the car or whether they can instead use public transport. By taking unnecessary traffic off the roads we reduce pollution and congestion, something that costs this region more than £2 billion a year.”

Alejandro Moreno, Director of Midland Metro Alliance, said: “We recognise that there will be some disruption to those living, working, travelling and visiting the city during this vital next stage of Metro works. We are working closely with Birmingham City Council, local Business Improvement Districts, Transport for West Midlands and public transport operators to minimise impact. As with our other projects, we aim to ensure the local economy benefits by sourcing goods and labour, wherever possible, from the local supply chain.”