Half of all Tube and rail pay-as-you-go journeys across London are made using contactless payments, illustrating how the new technology has become a part of daily lives… 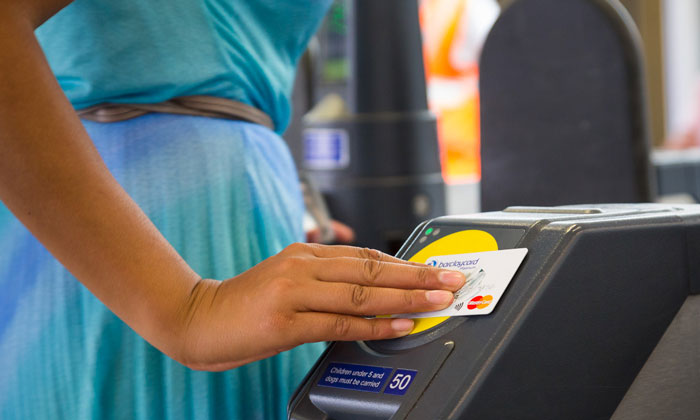 Seventeen million Tube and rail journeys across London per week are now made using contactless cards or mobile devices, the latest figures from Transport for London (TfL) have revealed.

The convenient payment method, which was launched on buses in December 2012 and across Tube and rail services in September 2014, is now being used for half of all Tube and rail journeys. Since the launch of the technology, more than 1.7 billion journeys have been made across the capital, demonstrating how Londoners and visitors have accepted contactless payments as a ‘norm’.

On buses and trams, the use of cashless methods is also increasing rapidly – with approximately 45 per cent of journeys now being made through contactless payments.

Several stations, including Blackfriars, Shoreditch High Street, Canary Wharf and Clapham Common, have been consistently seeing more contactless payments than the average; reaching 60 per cent of journeys using the technology. Close to half a million contactless pay-as-you-go journeys are made from Oxford Circus every week: equivalent to 50 cards tapping in per minute.

Steve Chambers, Public Transport Campaigner at Campaign for Better Transport, said: “Cashless ticketing is a simple, effective way for commuters to pay for their journey while making travelling across London’s transport networks easier and more flexible. The rise in the number of people making contactless payments proves that if people are offered multiple ways to pay for their ticket they will use them, which is a good thing.”

One in eight contactless journeys in London are now being made using a mobile phone or smart device, with this figure continually rising.

On the London bus network, the most popular bus route for cashless travel is the route 521 from Waterloo station to London Bridge station via Holborn, which regularly sees more than 60 per cent of all pay-as-you-go journeys being made using contactless.

Richard Koch, Director of Cards at UK Finance, said: “Contactless payments have transformed public transport in the capital, making millions of journeys each week quicker and easier. Passengers no longer have to waste time queuing for paper tickets and can enjoy the benefit of weekly capped fares. Building on this success, UK Finance has developed the Contactless Transit Framework to support the expansion of the new ticketing to cities and bus routes across the country.”

TfL’s contactless ticketing system automatically calculates the best value fare based on the customer’s specific journey history and charges them at the end of the day – ensuring customers always pay the best fare in the easiest and most convenient way. As a result, customers can save money compared to buying a one day Travelcard. Customers also benefit from weekly capping, which will be expanded to Oyster card users later in 2018, as well as the Hopper fare, which allows bus and tram customers to make unlimited journeys within an hour for the price of one.

Shashi Verma, Chief Technology Officer at TfL, said: “Contactless ticketing has made travelling in and around London and the South East by bus, Tube or rail quick, convenient and affordable. We’re delighted with how popular this innovation has become and, with the future extension of this technology across the Elizabeth line, even more customers will benefit in the future. We are also now working with other world cities to share our experience and knowledge to help them introduce a similar ticketing system in the coming years.”

The success of contactless in London is now leading to more world cities introducing the technology as a convenient method of paying for travel. In 2016, TfL signed a deal worth up to £15 million with Cubic Transportation Systems, allowing them to adapt the capital’s ticketing system worldwide. Since then, New York, Sydney, Miami and Boston have all announced that they plan to introduce contactless payments in the coming years.