The worst congested cities of 2017 have been revealed

Data collected from 300 million cars and devices in 1,360 cities reveal the average congestion levels and the consequent costs that this has on motorists… 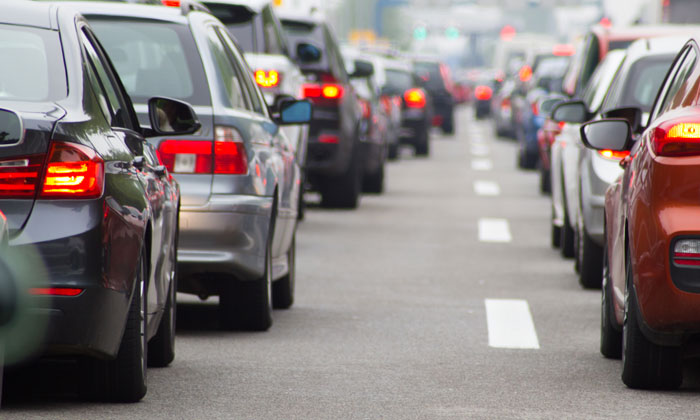 A new study into the levels of city congestion has found that Los Angeles is the world’s most gridlocked city.

The Global Traffic Scorecard, calculated by INRIX, found that LA drivers spend an average of 102 peak hours in congestion – 11 hours longer than the next most congested cities, New York and Moscow.

Sao Paulo’s drivers sit in fourth place, with 86 hours spent in traffic, while San Francisco ranks fifth with 83 hours. Out of the 1,360 cities analysed, London came in seventh, behind Bogota who had 75 peak hours of congestion.

When comparing the 38 countries investigated, Thailand, with 56 hours, had the highest average time spent in congestion. Following this was Indonesia with 51 hours, Columbia, 49 hours, Venezuela, 42 hours and joint fifth with 41 hours was the US and Russia. The UK was the tenth most congested country in the global ranking.

On average in the UK, drivers spend an average of 31 hours a year in traffic which in 2017 led to a loss of more than £37.7 billion in related costs*. £9.5 billion of this cost is derived from London, the seventh most congested city in the world with drivers spending an average of 74 hours in gridlock; an increase of one hour since 2016. 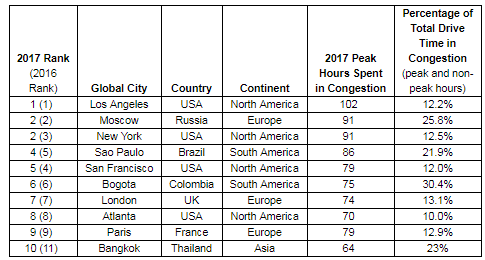 Many believe that applying big data to create intelligent transportation systems will be key to solving urban mobility problems.

Dr. Graham Cookson, Chief Economist, INRIX said: “With the Office of National Statistics showing more cars on the road than ever before, we need to consider innovative new approaches to solving the issue. Increased flexible working or road charges have potential, however, transport authorities should be looking to exciting developments in data analytics and AI, which promise to reinvent our approach to traffic management.”

The traffic within cities not only increases air and noise pollution but has an effect on local businesses too. In London, businesses suffered from the congestion as daytime traffic within the capital occurred on average 17 per cent of the time. Businesses in the city centres of Luton and Edinburgh also suffered from congestion with drivers sitting in traffic 12 per cent of the time during the day.

Emeritus Professor Roger Vickerman, from the School of Economics at the University of Kent, explained how the UK can tackle these problems: “What is needed is a nationwide system of charging for roads by use – road pricing. We already have blunt instruments such as the London Congestion Charge, but a sophisticated system of electronic tolling would charge drivers for their actual use of the system and by differentiating by time of day, those with flexibility can be encouraged to adjust their journeys to times of lower traffic volumes.

“The current system of charging motorists is a tax on car purchase and ownership and doesn’t distinguish by area of residence or actual use. Cars can spend an average 95 per cent of their life parked. The usual response is to call for more road building and whilst that and junction improvements can help in some cases, the evidence suggests that traffic typically expands to fill the space available. Eventually, as with any limited resource, the only solution is one that uses price as a means of allocation.”

The findings of the INRIX 2017 Traffic Scorecard provide a benchmark for global governments to measure progress, pollution, satisfaction and costs with the aim to improve urban mobility, increase sustainability and track the impact of spending on smart city initiatives.