In 2006 Solaris was the first European producer to launch serial production of hybrid buses, in 2011 it extended its offer to include electric buses. Now they are working on a bi-articulated trolleybus… 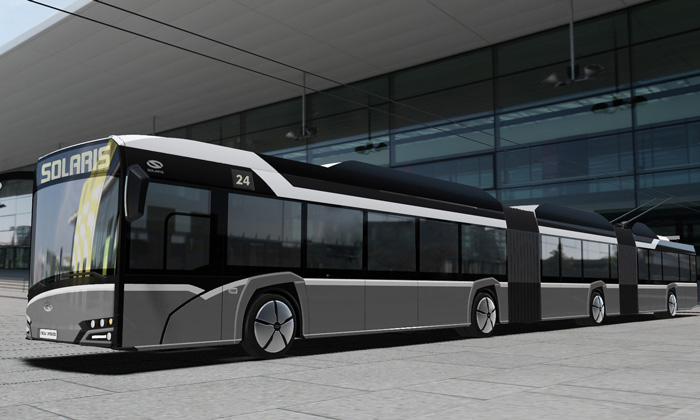 Solaris Bus & Coach has begun work on a new bi-articulated, three-unit trolley bus with the idea of creating a platform for the future serial productions of 24m hybrid or electric vehicles and trolleybuses.

The prototype vehicle, Solaris Trollino 24, will finish production during 2018 and move on to testing in selected European cities. During the test rides the vehicle will be attached to a trolleybus overheard line to undergo further type-approval tests, before being integrated into passenger traffic.

The new product will contain two traction motors propelling two drive axles. The overheard line supplies a current – through a bipolar pantograph- to a pack of 94Ah batteries which are installed within the bus and recharge throughout the drive. The energy stored in the batteries is used to fuel the trolleybus whenever it detaches from the electric traction.

To ease driving in urban traffic, which requires tight manoeuvres, the vehicle will be fitted with an electric power steering pump and the fourth axle will be a steering axle.

Solaris Trollino 24 also has many features to increase the comfort experienced by passengers and drivers. The driver’s cabin will include a heated and vented swivel seat, air-conditioning and two 8-inch screens that display views from the camera directed at the pantograph and the camera externally installed behind the second bus articulation. There will also be a screen in the cabin allowing the driver to monitor views from the CCTV cameras that will be installed at the doors, and the view from the rear-view reversing camera.

For passengers there is also air-conditioning, a comprehensive passenger information with trolleybus destination displays and three 29-inch screens in the passenger compartment. Alongside this there will be numerous USB ports throughout the vehicle, energy-saving LED lighting and 16 seats accessible from the low floor for passengers with reduced mobility.

Solaris Bus & Coach added trolleybuses to its offer already back in 2001. Since then nearly 1200 vehicles of the type have been ordered and supplied to customers from 16 countries. The new Trollino 24 is a new innovative version and will constitute a platform for the development of new additions to the Solaris portfolio.