Nanyang Technological University, in its mission to become a smart campus, continues to introduce electromobility into their public transport; reducing emissions and creating a more efficient transport system… 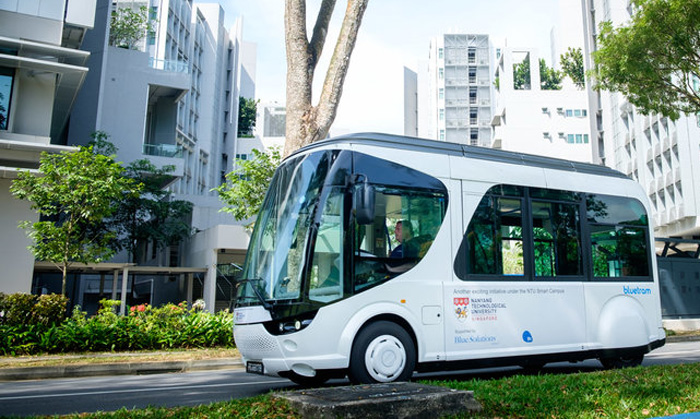 An electric shuttle that charges in 20 seconds has been launched in Singapore by Nanyang Technological University (NTU) and BlueSG Pte Ltd.

The road trials planned for the 22-seater shuttle will run between NTU’s Halls of Residence at North Hill and JTC’s CleanTech One, which is part of the Jurong Innovation District where special charging stations have been built. The charging equipment is fitted at stations so the shuttle can re-charge whilst passengers board and depart the vehicle.

“The move to introduce electromobility and cutting-edge transportation technologies is part of our vision to transform NTU into a smart campus,” said Professor Subra Suresh, NTU President. “The NTU Smart Campus is the perfect partner for BlueSG to test and develop electric shuttles for Singapore.  We expect that the insights and innovations developed from this partnership will ultimately benefit Singapore, and the world, by enhancing the first-mile and last-mile transportation options.”

NTU’s research partnership with BlueSG will run for two years and is supported by the Economic Development Board, Singapore. As part of the trials, the students will be able to ride the shuttle from the second half of 2018. The collaboration is also one of the key initiatives under the France-Singapore Year of Innovation, which aims to intensify cooperation on innovation between the two countries in 2018.

“The launch of this very first Bluetram in Singapore, for the students and professors of NTU, further validates the technology and expertise of the group in the field of electric battery,” said Marie Bolloré, Managing Director of Blue Solutions. “Our ambition is to make available innovative mobility solutions to the greatest number that respect the environment.”

Based on the technology of trams, the Bluetram can replicate the tram efficiency, operating continuously without offline charging. Developed by Blue Solutions, a subsidiary owned by the Bolloré Group, the shuttle contains supercapacitors and a LMP battery meaning 2km can be travelled on a single charge, with a backup power system that provides an extra 30km.

Furthermore, Bluetram does not require costly infrastructure such as rails or catenary, therefore the cost of operation is five to 10 ten times lower than a tram system. A whole line for Bluetram can be installed in a matter of weeks.

As part of NTU’s Smart Campus initiative, the university is also debating with BlueSG the possible installation of electric vehicle car-sharing stations. These will add to the existing stations around campus and enhance NTU’s connections with nearby communities in Jurong West, Jurong East, Choa Chu Kang and Bukit Panjang, as well as the rest of Singapore.

This is part of BlueSG’s ongoing expansion of its charging stations island wide.