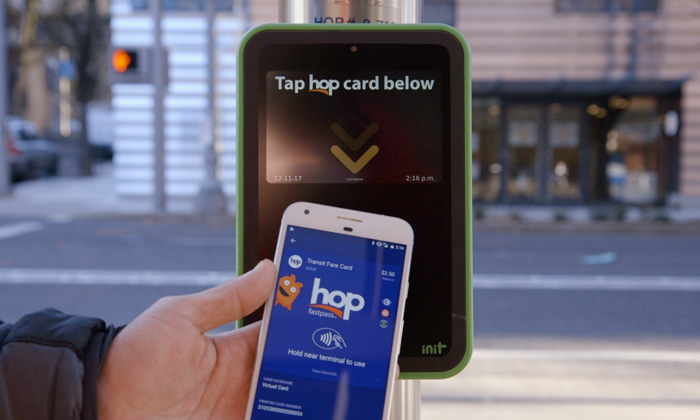 TriMet, who provide bus, light rail and commuter rail transit services in the Portland, Oregon metro area have teamed with Google to create Hop Fastpass; the first virtual transit card available in Android Pay. The first mobile wallet partnership for TriMet will start in early 2018; the beta testing for the integration will start late December 2017 when a select group of TriMet, C-TRAN and Portland Street-car beta testers will load a virtual Hop card and experience the functionality of Hop.

Currently, TriMet riders can pay with debit or credit cards by tapping their smartphones with Android Pay at a Hop reader – but only for adult fares. With the new virtual card purchasing Youth, Honoured Citizen or Adult fares is available, reloading value online is done with ease and an auto-reload set up can be organised. If the cost of a day pass is reached, the rest of the rides are free that day. Similarly, once the cost of a month pass is reached, the rest of the rides that month will be without charge.

This means the Android Pay users will enjoy the same daily and monthly savings that physical Hop card users receive. Hop is a regional account-based, electronic fare system in which users pay their fare by tapping a card or phone against a reader.

Innovations in Transportation, Inc’s (INIT) back-end procession software, MOBILEvario, serves as the core intelligence for Hop’s account-based payment fare system. INIT has been assisting transport companies in making public transport more attractive, faster and more efficient for more than 30 years so the partnering companies are confident in the execution of the virtual Hop Fastpass.

Time for the Midlands to tap-and-GO