The Municipal Transport Company (PKM) in Jaworzno has procured a further 22 zero-emissions electric buses from Solaris following its positive experiences with the Solaris Urbino electric bus it purchased in 2015.

The buses, which have been rolled out onto Jaworzno’s streets in the last few days, are all equipped with a pantograph, enabling charging of their batteries both on route and at the bus depot. They also have  plug-in connectors to enable overnight charging at the depot. 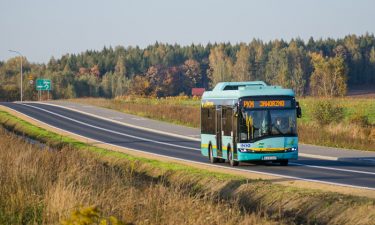 The bus’ various on-board technologies (ticket machines, USBs, and intelligent fleet management system) enable passengers to buy tickets on board the buses, charge mobile devices, and stay updated with real-time information about their journey. The electric fleet has included measures to ensure it is accessible, equipped with ramps to ease the entry of wheelchair-bound passengers, and including wheelchair bays.

Rafał Zajas, Solaris’ Sales Director for the Southern Region of Poland, praised PKM’s forward thinking attitude for making such a large percentage of its bus fleet electric: “It is a challenge and extraordinary pleasure to cooperate with a client who knows from the very beginning how to develop the electric bus programme of his fleet and what he requires from the manufacturer. Together with PKM, we have been able for over two years to gather precious experience and apply it to the further development of electric buses made by Solaris.”

The unveiling of the new buses coincided with the opening of PKM’s new bus depot, the ‘Centre of E-mobility’, which is one of the most advanced of its kind in Europe. It comprises depot charging stations for electric vehicles that enable the simultaneous charging of up to eight vehicles.

“Twenty-three electric vehicles in our rolling stock is just the beginning. The company’s plans target the operation of 43 zero-emission buses by 2020,” said Maciej Zaremba, a spokesperson for PKM Jaworzno.

The new ecologically-minded approach to public transport is reflected in Solaris’ recent tender wins to provide electric buses for numerous towns and cities across Poland, as well as in Brussels, Barcelona, Oslo and Milan.