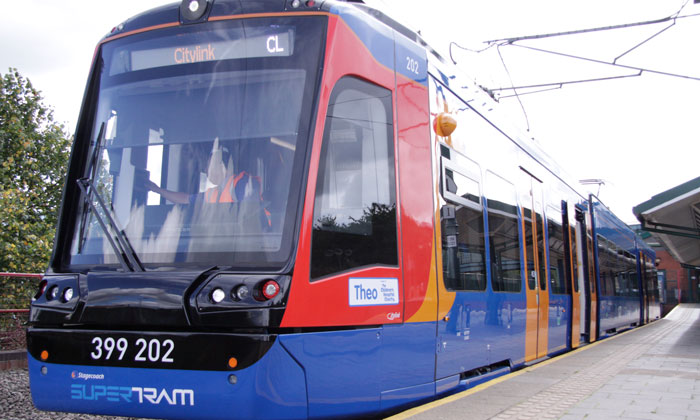 The Tram Train will be operating on the Supertram network in Sheffield.

The launch of Theo the tram marks an important milestone for the unique pilot scheme, and has allowed passengers in South Yorkshire to be the first in Great Britain to travel on the innovative tram vehicle.

To celebrate the occasion, Stagecoach Supertram and South Yorkshire Passenger Transport Executive (SYPTE) named the first tram after The Sheffield Children’s Hospital Charity’s mascot, Theo, and invited passengers on the first journey to make a donation to the charity rather than paying a fare.

South Yorkshire’s new Citylink vehicles, which have been designed and produced by Stadler, will be used in the regular Supertram timetable from October to support the existing tram service across the network until the new tram train route from Sheffield to Rotherham is opened in 2018, once rail infrastructure work, testing and driver training is complete.

South Yorkshire’s Tram Train pilot will run for two years during which customer satisfaction, passenger numbers, reliability and costs will be measured. After this pilot period, Tram Train will continue to run as a local service.

“South Yorkshire’s Tram Train project is the first of its kind in the country and will transform services for passengers, enabling quick and easy movement across the region, reducing journey times and boosting the economy,” commented Transport Minister Paul Maynard.

“The first passenger service is a significant milestone for this scheme which remains on track to be completed next year and will improve journeys between Sheffield and Rotherham.”

Theo the tram will also be in service on Sunday 17 September as a special charity service with Supertram staff collecting donations for The Children’s Hospital Charity once again.