OSPT Alliance has announced a trial to replace cash-based payments with an automated fare collection (AFC) solution based on the CIPURSE open standard across bus lines in the Colombian city of Medellín. The project, which is being led by OSPT Alliance Associate Member, Stratos Group, involves eight of Medellín’s largest carriers which have a combined […] 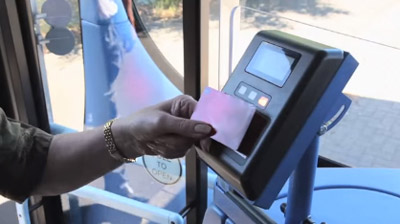 OSPT Alliance has announced a trial to replace cash-based payments with an automated fare collection (AFC) solution based on the CIPURSE open standard across bus lines in the Colombian city of Medellín.

The project, which is being led by OSPT Alliance Associate Member, Stratos Group, involves eight of Medellín’s largest carriers which have a combined fleet of over 800 buses. The solution enables passengers of the city’s bus lines to pay for travel by simply tapping a pre-loaded CIPURSE-based travel smart card on a bus’s point of sale reader. The card can be topped up with funds of up to COP 20,000, prior to travel, thereby providing a quicker and more efficient travel experience for consumers.

Stratos Group worked with a number of strategic partners to provide technology solutions to streamline the organisation of the city’s bus lines. OSPT Alliance member, Infineon Technologies, provided its CIPURSE Security Controller SLS 32TLC100, which is the first and only security controller for contactless transport and ticketing applications with CIPURSE and EAL5+ certification.

Jaime Patiño, CEO of Stratos Group, comments: “We were delighted to have so many important players supporting this project. The CIPURSE open standard provides consumers with an efficient and flexible way to pay for travel on the city’s buses. It also aligns with one of the key requirements from the transport operators in Medellín, which was for the solution to have the flexibility to be multi-application in the future as CIPURSE has been designed by OSPT Alliance to be multi-application by nature.”

Created by member-driven association OSPT Alliance, The CIPURSE open standard offers a foundation for developing secure, interoperable and flexible applications including AFC, ticketing, loyalty and micro payment. According to OSPT Alliance, the latest version of CIPURSE defines a universal multiple proximity system environment, which enables access control terminals to better identify and connect with the required application on a secure-chip to authorise access. This allows an application based on CIPURSE, such as transit, ticketing or loyalty, to be recognised more quickly by the reader in the terminal.

Laurent Cremer, Executive Director of OSPT Alliance, said: “CIPURSE was originally designed with transport in mind, however, it is also suitable for other domains. As CIPURSE has been designed with the multi-application facility from the start, it is simple and cost effective for service providers to enhance the services they offer to end-users even after card issuance. For example, if a card is issued with a transport application – as it is in Medellín – a payment application can easily be added without affecting the already deployed application.”

“At Stratos Group we believe that interoperability between technologies is a key challenge which the public transport industry needs to overcome”, adds Jaime Patiño. “As an open standard CIPURSE was the ideal choice for us to develop this project on. Not only does it facilitate interoperability, it also offers a high level of flexibility and security, and as it is built on established standards such as ISO this provides reassurance to transport operators that their transit ticketing solutions are future-proofed against evolving technologies.”