In a UK bus industry first, First Bus’s new Tap On-Tap Off fare system pilot will calculate adult customer fares based on the direct distance travelled to make a journey. 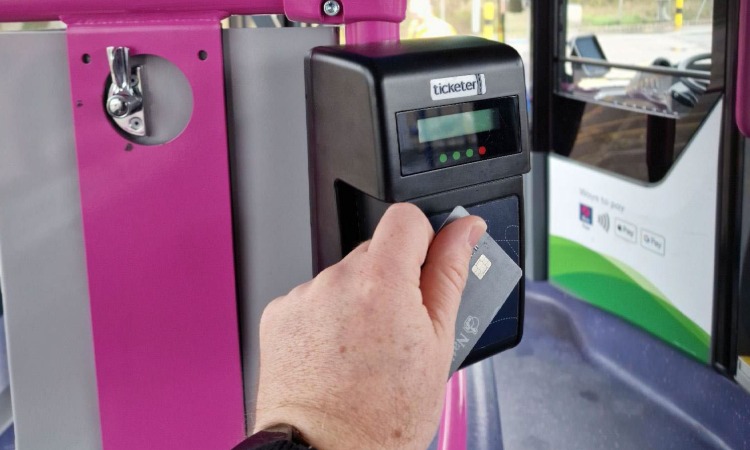 First Bus has announced that it has embarked on an innovative new pilot in partnership with Ticketer to simplify its existing Tap On-Tap Off fare capping system for its customers.

The pilot is taking place in the First Cymru operating area of Bridgend County Borough in Wales, with the help of Transport for Wales (TfW) and Bridgend County Council, and will calculate adult customer fares based on the direct distance travelled to make a journey, for the first time in a UK bus industry first.

A journey can consist of a passenger boarding multiple buses, within a 30-minutes transfer time. The passenger’s fare will then be calculated to the exact distance (to the nearest metre) between their first boarding and final alighting bus stop.

The day cap is lowered the more often the customer travels across the same week, ensuring that the maximum a customer pays for a week’s bus travel is £21 – no matter the distance they travel or the number of journeys they make.

The scheme is designed to offer customers a more flexible and ‘fairer fares’ system and has the potential not only to save them money in the short-term, but to offer great value for money in the long-term.

Simon Pearson, Chief Commercial Officer, First Bus UK said: “This pilot has the potential to change the game in the fare capping and pricing space and is part of our nationwide roll-out of Tap On-Tap Off across the UK operations. We are excited to see the results of the pilot and more importantly how it goes down with our customers. This pilot will run for an initial three months but has the potential to be extended and could be rolled out in other areas in the future if successful. As we go through the current cost-of-living crisis, it important to us to continue to innovate to find ways to save our customers money and bus remains great value as a travel option of choice for everyone.”

The pilot is running on all First Cymru’s buses in the county except for Cymru Clipper Services, which will continue to be charged in the usual way.