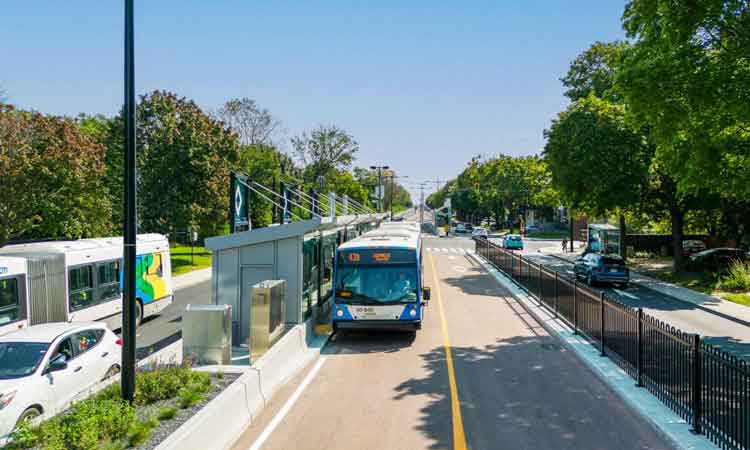 The project infrastructure, spread over 11km, will run from Saint-Martin Boulevard in Laval to Pierre-De Coubertin Avenue in Montréal, facilitating and encouraging the use of public transit in Montréal’s east end.

“The Pie-IX BRT, which connects with the future Blue line extension, the Green line, and the exo5 Mascouche train line, will become an important component of a new sustainable mobility network that will contribute to the east end’s growth,” commented Geneviève Guilbault, Deputy Minister and Minister of Transport and Sustainable Mobility. “With these investments, we are helping to improve the service offering for transit users and making Quebec even greener!”

Consisting of exclusively reserved lanes that are painted a different colour and located mostly in the middle of the road rather than in the right-hand lane, the STM, STL and exo buses using them will not be slowed down by other traffic and given priority at traffic lights. As such, the Pie-IX BRT project aims to reduce congestion and carbon emissions, as it encourages the city’s inhabitants to make the move out of their cars and onto public transport.

New traffic infrastructure, including pedestrian crossing lights with digital and audio countdown, will allow pedestrians to cross to the BRT shelters safely, of which there will be 38 in total.

“This new public transit service will also help encourage residents and visitors alike to switch from using their cars to using faster, more environmentally friendly means of transportation, which will reduce our carbon footprint and take us one step closer to a greener future.”

The Can$472.5 million project is mainly funded by the Government of Quebec, including Can$345 million for public transit and Can$180.2 million for municipal infrastructure and the redevelopment of Pie-IX Boulevard.