To support the Singapore government’s emission reduction targets, LTA is accelerating its bus electrification efforts and is supporting the wider adoption of EVs, as well as the necessary charging infrastructure. 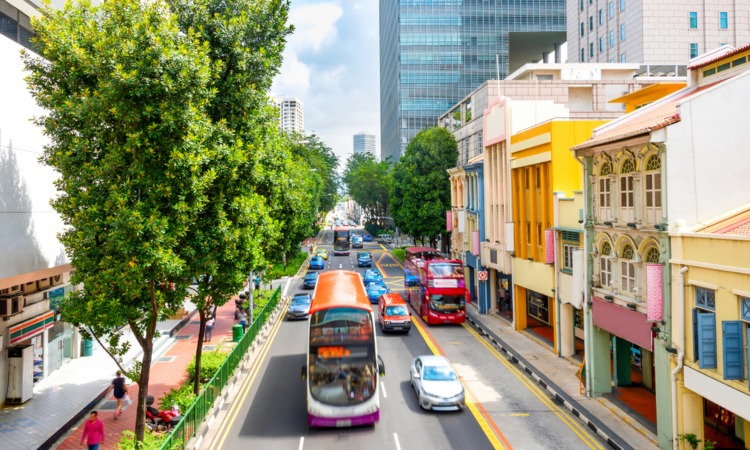 Land transport emissions in Singapore peaked at 7.7 million tonnes of carbon dioxide equivalent (MtCO2e) in 2016, well in advance of the 2030 timeline set at the national level. The Singapore government is committed to further lowering land transport emissions and has set a new target of reducing emissions from the 2016 peak by 80 per cent by or around 2050. Vehicle electrification, along with the decarbonisation of the power grid, will be key in achieving this goal.

To pave the way, the Land Transport Authority (LTA) has announced that it will increase the rate of electrification of the country’s public bus fleet and incorporate more clean energy measures into the transport infrastructure. In addition, more will be done to spur the adoption of electric vehicles (EVs), including within LTA’s taxi fleet.

LTA has committed to having a 100 per cent cleaner energy bus fleet by 2040, with 60 electric buses having already been purchased and deployed to help to better understand the operational and technical considerations of a larger scale roll-out. As LTA replaces diesel buses that have reached their statutory lifespan, half of the public bus fleet will be electric buses by 2030 – over 400 diesel buses will be replaced by 2025.

Singapore’s point-to-point sector also plays an important role in reducing land transport carbon emissions, which is why LTA has been working closely with private hire car operators to increase EV adoption. LTA’s taxi operators have committed that at least half of their taxis will be electric by 2030. To support this, LTA will extend the statutory lifespan of all electric taxis from eight years to 10 years – giving operators more time to optimise their electric taxi investments. For private hire cars, 50 per cent of the GrabRentals fleet will also be electric by 2030.

In order to drive the adoption of EVs, every Housing and Development Board (HDB) town will be EV-ready by 2025. This means that LTA will deploy charging points in all 2,000 HDB car parks within the next three years, with a minimum of three chargers in each car park at the beginning and more to be deployed as EV adoption increases. To this end, LTA will be launching a large-scale tender for HDB carparks in the first half of 2022. This is another significant step towards achieving its target of 60,000 charging points by 2030.

LTA will take the lead to progressively upgrade the required electrical infrastructure in all residential estates, to ensure that there is sufficient electrical capacity to support EV charging. The upgrades will be financed by LTA through the issuance of green bonds, and the costs will be recovered from EV charging operators and EV users over the longer term.

Furthermore, new legislation to ensure safe and reliable EV charging will also be introduced, with public consultation set for late 2022.

To reduce carbon emissions and lower energy costs, LTA will install solar panels on the roofs of new or recently upgraded land transport infrastructure, such as rail and bus depots, offices and facility buildings. This will support the authority’s existing plans to achieve the solar energy deployment targets of 16-megawatt peak (MWp) by 2025 and 25 MWp by 2030.

In addition, LTA will call an open tender in March 2022 to deploy solar panels on other land transport infrastructure, including the upcoming Integrated Train Testing Centre, pedestrian overhead bridges and covered linkways.

Through the open tender, LTA will be able to contribute up to 20MWp of additional solar capacity. This is equivalent to the power needed to charge up to 285 single deck e-buses for an entire year. LTA will continue to incorporate more solar panels into the transport infrastructure where possible.