Though electric vehicles are expected to drive the public transport industry’s shift to net zero, there are still a range of other alternative power solutions available to support this effort. In this article, the Central Ohio Transit Authority discusses its commitment to achieve carbon neutrality by 2050 and explains how it will be using a combination of CNG, hybrid and electric vehicles to get there. 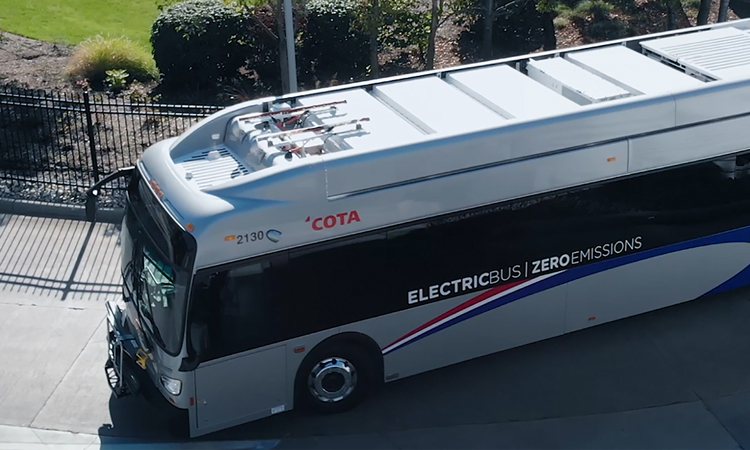 When the Central Ohio Transit Authority (COTA) launched our first two electric transit vehicles into service in early October 2021, it was a continuation of COTA’s evolution in delivering environmentally responsible transportation across the region. It is an effort that truly began in earnest in 2013, with the commitment to replace all diesel buses with cleaner burning, compressed natural gas (CNG) coaches by 2025. With technology improvements around electric vehicles (EVs); our continued testing and piloting of clean energy projects and dedicated infrastructure investment; and partnerships with the City of Columbus, state and federal government agencies, COTA today is on track to meet our sustainability commitment to achieve carbon neutrality by 2050.

Public transit is responsible for just a fraction of CO2 and other emissions in most cities when compared to single-occupancy vehicles (Columbus’ passenger vehicles make up 65 per cent of all transportation emissions in the city, for instance). However, COTA and transit agencies around the globe take seriously the massive impact that we can have in reducing those emissions to slow climate change, both in the adoption of clean energy vehicles, as well as encouraging the continued and expanded use of transit by the public. In fact, COTA has aligned its emissions goals with those of the City of Columbus’ draft Climate Action Plan, which makes tackling climate change a priority for the city and also includes a path to net zero carbon emissions by 2050.

A range of alternatively powered vehicles

Success in reaching COTA’s zero-emissions goals began with those CNG vehicles, which we’ve continued to add to our fleet since 2012. Our current fleet consists of 234 CNG vehicles, six diesel‑electric hybrids, two new electric vehicles and just 79 diesel vehicles remaining. CNG is, in fact, one of the cleanest fuel technologies in transit, producing up to 30 per cent fewer greenhouse gas emissions than traditional gas or diesel buses, a 90 per cent reduction in carbon monoxide and up to 95 per cent nitrogen oxide exhaust emissions. That means that those 234 CNGs make COTA one of the cleanest fleets in the nation.

For transit agencies, CNG is also a less expensive fueling option than traditional gas or diesel. At COTA, we’ve reduced that cost even further through targeted infrastructure investments at our own facilities, where our team can now refuel vehicles at two on-site CNG fueling plants, located on COTA’s McKinley Avenue and Fields Avenue facilities. Today, CNG costs roughly $0.50 cents per gallon, compared to as much as $2.50 per gallon for diesel. Further innovation and investment is underway at McKinley, with a $65 million facility upgrade that includes additional EV charging stations as our electric fleet expands.

That EV expansion will continue as early as 2022, when COTA adds eight more vehicles to our operations. Our ability to test these new vehicles on fixed transit routes is critically important for deciding how and how many of these vehicles will integrate into the COTA system. The key to the massive adoption of electric transit vehicles – just as in the consumer EV market – is a reduction in battery costs, increased travel range and infrastructure investment for vehicle charging.

Beginning with that infrastructure investment, COTA is adding additional charging stations at our McKinley facility. But the next step involves on-route charging stations that remedy the need to halt service to return to the garage. COTA is exploring where those stations could be located, and purchased coaches with rooftop charging capabilities under the assumption that we will implement these new stations. That could be a game-changer, as these EVs currently reach about a 150 mile range on a single charge, while CNG vehicles can run for as long as 280 miles without refueling.

Currently, electric transit vehicles are 20 to 30 per cent more expensive than CNG vehicles, but EVs have drastically lower maintenance costs overall, with fewer moving parts, no transmission and no timing belt or oil changes, for example. Battery cost reduction and performance improvements continue in the EV market as well, which will increase adoption, and, in the transit industry, could support more use of EVs on high‑capacity rapid transit routes.

Industry partnerships In Central Ohio, COTA will determine if electric transit vehicles could service high-capacity rapid routes along new transit corridors outlined in a recent LinkUS Mobility Corridors Initiative. LinkUS is a collaborative effort with COTA, the City of Columbus, the Mid-Ohio Regional Planning Commission (MORPC) and the Franklin County Board of Commissioners, which will help to address traffic congestion, provide new mobility options, expand access to resources and promote equity and economic vitality along key regional corridors. Clean transit should be an integral part of this solution.

It is partnerships such as these that will help transit agencies to provide not only better but more environmentally responsible transit options for residents. Because, while transit agencies can take the lead on many of these initiatives, we cannot do this alone, particularly with ridership still down as the COVID-19 pandemic recedes. At COTA, we work closely with the City of Columbus on clean energy goals, as well as innovative solutions – including micro-transit – for those populations most in need. And we will need to work closely with regional municipalities in expanding our charging station capabilities.

COTA also seeks opportunities to utilise state and federal funds that support innovative transit solutions and the infrastructure behind it. In 2019, for instance, the U.S. Department of Transportation (USDOT) awarded COTA a $2.6 million Infrastructure for Rebuilding America grant to use toward the transition to diesel-free buses by 2025. We used those funds to support the purchase of electric buses and EV charging stations. In November, the U.S. Congress passed a historic bipartisan infrastructure bill that will provide the largest ever federal investment in public transit, with much of that aimed at replacing thousands of transit vehicles with clean, zero-emission vehicles, according to the White House.

In the U.S., we are in the early stages of EV transit adoption, with only an estimated 700 electric transit vehicles currently in public transit operation today. At COTA, we embraced clean CNG technology nearly nine years ago, and know that we must find ways to integrate EVs into our routes and fleets to continue serving our customers with clean transit solutions. With the rapid improvement in battery and electric transit vehicles, alongside a commitment from COTA, our city, state and federal governments, the opportunity for us to embrace and push these changes to become a zero-emissions transit agency has never been better, or more urgent. We believe that 2050 is a lofty and reachable goal.