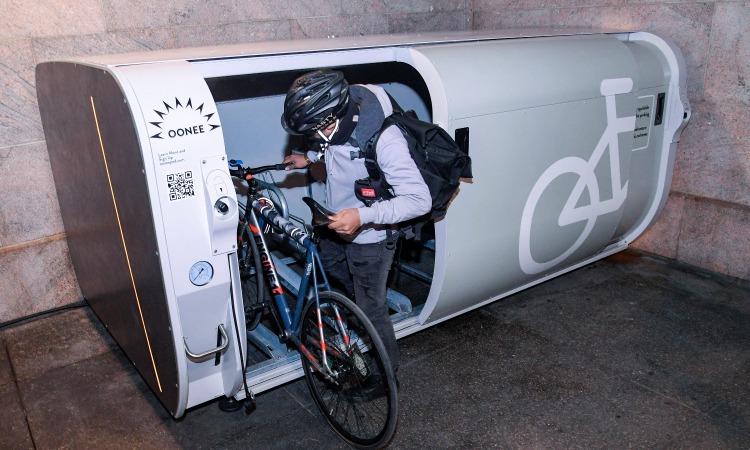 The Metropolitan Transportation Authority (MTA) has announced the addition of secure bike storage at Grand Central Terminal as part of a pilot programme launched by MTA Metro-North Railroad, in partnership with Oonee. Formally announced in October 2021, the pilot programme is expected to last for one year and includes a mini pod with six parking spaces.

Installed at Grand Central’s former taxiway space at 43rd Street and Vanderbilt Avenue, the pod provides direct access to the terminal’s west balcony and main concourse. It is also protected from rain and snow by a large overhang.

“This is the time to think seriously about using micro-mobility to expand the reach of the MTA network,” said MTA’s Chair and CEO, Janno Lieber. “One way to bring riders back to the system is to make customers’ overall trips easier. Cycling exploded during the pandemic, and this pilot is a step towards improving bike access.”

“Metro-North is thrilled to build on its ongoing efforts to provide sustainable transportation options for riders,” said Metro-North Railroad‘s President, Catherine Rinaldi. “I’d like to thank the Metro-North Stations Department for working so hard to make this pilot happen, and Board Member Norman Brown who first brought Shabazz [Stuart, Founder and CEO of Oonne,] and the great work that he has been doing to my attention.”

The pilot features the debut of a six-space secure bike parking pod. Use of the pod will require a reservation through a free membership, which will allow users to unlock a private space inside the pod using a key card or smartphone. Reservations will be offered on a first come, first serve basis and anyone can register. The pod will have a free air pump with both Presta and Schrader valves, hydraulic sliding doors for easy access, automated closing doors and insurance coverage for both bike and scooter owners.

The launch of the secure bike storage continues MTA’s commuter railroads’ ongoing efforts to become more bike friendly. In August 2021, Metro-North and the Long Island Rail Road (LIRR) announced that bike permits would no longer be required onboard trains as of 7 September 2021.