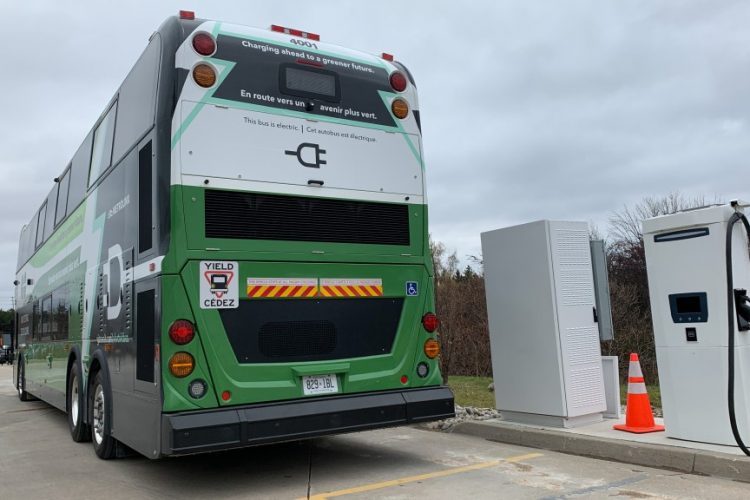 As the transport industry heads to a more sustainable future, Metrolinx has unveiled that it has been testing two zero-emission electric GO Transit buses.

The double-decker GO buses have been retrofitted with nine batteries, giving them a total energy of 648 kWh. This is a significant increase in comparison to the Nissan Leaf (one of Canada’s most popular fully electric cars), which has a single 40 kWh battery.

In order to maintain safety precautions, customers will not be on-board the buses during the first test phase. Instead, ballasts will be installed to mimic the weight of a full bus.

In 2022, Metrolinx plans to add these buses to select GO bus routes operating west of Toronto as data is gathered on performance in different settings and weather conditions.

Although the new buses look similar to normal buses, they are very different in a few ways. Their battery-powered engine allows for a much quieter commute, which is possible due to the absence of a diesel engine. Riders will first notice how quiet the buses are; however, due to safety reasons, the buses do make a constant white noise to replicate engine noise.

Furthermore, customers will find USB chargers at their seat for convenient power on-the-go, as well as more storage space for their luggage toward the back of the bus from both the inside and outside, due to the location of the batteries. Providing a much more convenient rider experience, this is unlike other buses in the GO fleet.

Metrolinx has also installed a pedestrian audible visual alert system (PAVA). This means that, when turning or reversing, the bus will play a sound and message to alert pedestrians and cyclists. These electric-powered GO Transit buses will also feature seatbelts for customers, as part of new legislation.

However, the large batteries that power the buses are installed at the back of the lower-seating level, which means that 10 less seats will be available on board.