The new pilot will allow Mancunians access to cargo bikes and even cars through an electric car club being launched as part of the eHUBS trial. 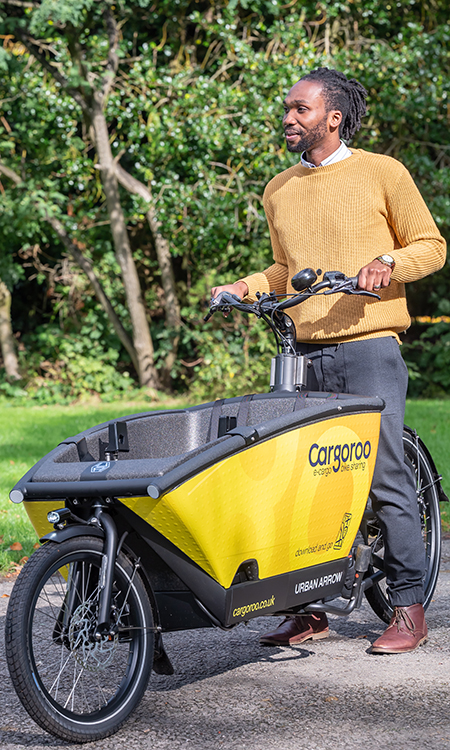 The year-long eHUBS trial will offer residents in Chorlton, Whalley Range and Ancoats access to a number of electric cargo bikes for hire.

Common in cities across Europe, they are available from dedicated bike parking bays in Chorlton, Whalley Range and Ancoats and have a battery range of around 60 miles.

The bikes, which can carry a heavy load, have a large open compartment which can be used as storage or to safely carry children. The compartment is equipped with seats for the children, as well as safety belts and a protected foam layer. Some are equipped with a maxi-cosy adaptor for very young children, and these can be identified via the app.

The app-based scheme is run by Cargoroo, which already runs e-cargo bike services in the Netherlands and Belgium, and will be operated and maintained by local business, Manchester Bike Hire

The launch of the scheme complements Greater Manchester’s new Bee Network Cycle Hire scheme that went live in Manchester city centre and at the University of Salford last month. Once fully rolled out in Summer 2022, the Bee Network scheme will see 1,500 bikes and e-bikes available to the public. In addition to this, new cycling routes and infrastructure are being delivered across Greater Manchester as part of Mayor Andy Burnham’s Bee Network vision.

A new electric car club, run by vehicle rental company Enterprise, has also launched as part of the eHUBS scheme. Currently live at East Didsbury Metrolink Park and Ride, further electric cars are set to go live in Chorlton, Bury town centre, Prestwich and Ancoats in early 2022. In total, 12 electric cars will be available to rent by the half-hour through the Enterprise Car Club app.

The eHUBS scheme also comes in advance of Greater Manchester’s Clean Air Zone due to be introduced on 30 May 2022 – private cars, motorbikes and mopeds will not be included.

The Zone will reduce harmful air pollution on local roads, making our city-region safer for everyone.

“It’s testament to the work we are doing to better integrate sustainable modes of transport and make travel for people easier and greener,” said Greater Manchester Mayor, Andy Burnham.

“The eHUBS project opens up so many possibilities for people who either don’t have a car or want to reduce their reliance on polluting vehicles and I would encourage local residents to give this a go.

“If successful we could see this rolled out more widely, which would help modernise the way we move around for everyday trips as well as reducing air pollution and contributing towards Greater Manchester’s target of reaching net carbon neutrality by 2038.”

Councillor Tracey Rawlins, Manchester City Council’s Executive Member for Environment, added: “Helping people make a transition from fossil fuel-based transport is a key part of the work going on in Manchester to meet our aims around carbon reduction. For many people the car is essential when it comes to doing the weekly shop, or getting children from A to B. The trial of eHubs, providing affordable access to electric cargo bikes and electric cars, is a huge step towards proving that electric is a viable and attainable alternative we can all use and enjoy.”