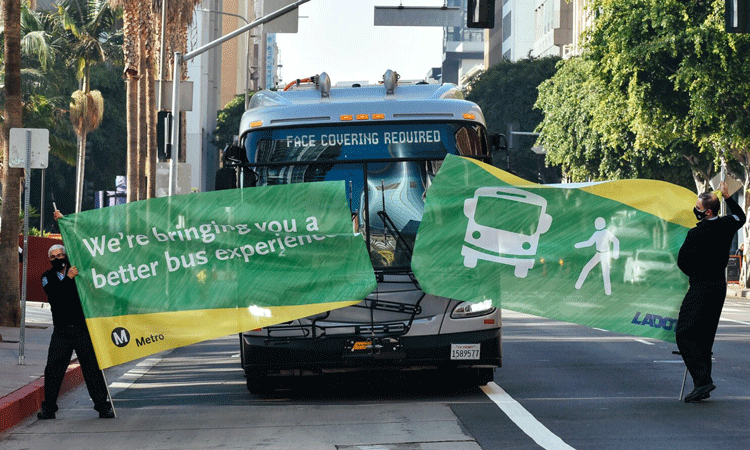 In partnership together, the Los Angeles County Metropolitan Transportation Authority ( LA Metro), the City of Los Angeles, and the Los Angeles Department of Transportation (LADOT) will help speed bus service for transit customers during weekdays with the launch of two new bus priority lanes on Grand Avenue and Olive Street in downtown LA. These lanes will run along southbound Grand Avenue from Hope Place to Pico Boulevard and along northbound Olive Street from Pico Boulevard to 2nd Street.

“The Grand Avenue and Olive Street dedicated bus priority lanes will enhance mobility and safety for the thousands of people who rely on public transit each day to get to and from school, work, shops, and appointments along these busy corridors,” said Hilda L. Solis, LA Metro Board Chair and Los Angeles County Board of Supervisor to the First District. “These bus lanes directly support the low-income households that use these corridors for travel, half of whom fall below the poverty line.”

“We expect these dedicated lanes to improve bus speeds by up to 15 per cent, which means getting our riders to their destinations faster and greatly enhancing the customer experience through better service reliability,” said LA Metro CEO, Stephanie N. Wiggins. “We want to build on the success of our earlier bus priority lanes in downtown Los Angeles to make Metro the best transportation option for Angelenos and visitors alike.”

How the lanes work

Mayor Eric Garcetti added: “Our bus network is the backbone of our transportation system, and these bus lanes are a clear next step toward faster and more reliable service, higher ridership, and lower emissions. We are working tirelessly to make our system work better for Angelenos, and this project is a clear example of the type of improvements that will take Angelenos where they need to go faster, and more safely and sustainably.”

Metro has been working closely with LADOT to implement a series of bus priority lanes along heavily travelled corridors. This phase of NextGen calls for the addition of hundreds of additional bus trips on weekdays and weekends, with a focus on adding much-needed bus service during the mid-day periods to provide all day, frequent service.

“Our partnership with Metro is transforming how people move through Downtown L.A. and beyond,” said LADOT General Manager Seleta Reynolds. “Bus lanes move more people, more quickly to ease congestion and make it more enjoyable to get around the city.”