FlixMobility will work with its partners to develop, test and launch hydrogen buses that can operate across long distances as part of its efforts to decarbonise transport. 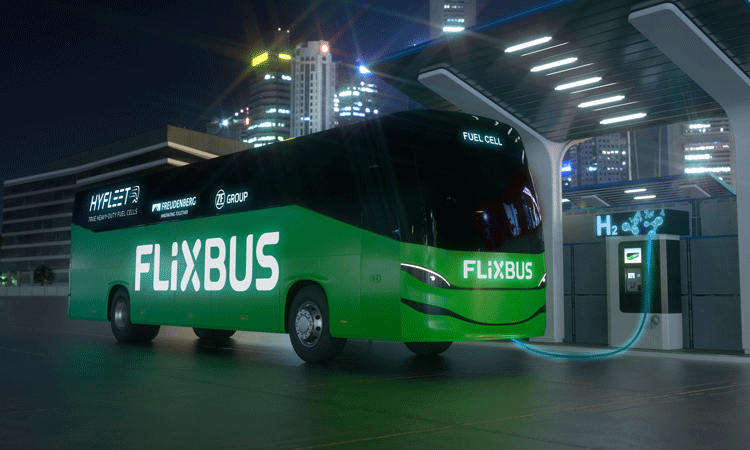 Credit: FlixMobility - Concept image of a hydrogen FlixBus at a fuel station.

FlixMobility has announced that, with its partners Freudenberg Fuel Cell e-Power Systems and ZF Friedrichshafen AG, it has begun the HyFleet research project, which will focus on the development of a high-performance fuel cell system for long-distance buses, in order to bring sustainable and CO2-free mobility to life.

Upon development of this technology, FlixMobility plans to test and launch fuel cell powered buses in long-distance traffic until 2024 in Europe as part of efforts to set new standards. The climate non-governmental organisation (NGO), atmosfair, is involved as an associated partner, and a European bus manufacturer will also join the project in the future.

The project consortium has received official ‘UIA’ (a non-binding letter of intent) confirmation from the German Federal Ministry of Transport and Digital Infrastructure.

André Schwämmlein, Founder and CEO of FlixMobility, said: “We are proud to be part of the HyFleet project to develop the first fuel cell-powered long-distance bus in Europe until 2024, together with Freudenberg and ZF. Fuel cell power technology is part of the green mobility revolution and gives bus producers the chance to shape the future of sustainable mobility. With this project, we continue our path of providing millions of people sustainable and affordable mobility. We are fully in line with the carbon neutrality objective of the [European Union] and Germany and are ready to deliver. It’s great to see that the German government acknowledges the need for the transport sector to speed up its decarbonisation and is ready to support collective transport on this road.” 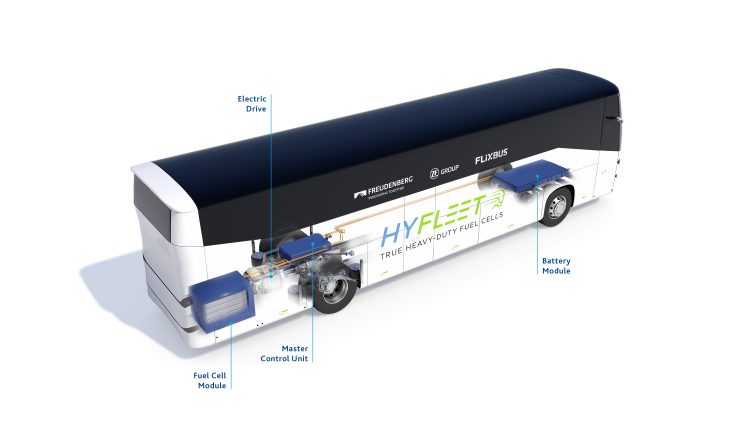 Thanks to a modern fleet and the high capacity of FlixMobility, long-distance buses are already now one of the most environmentally friendly means of transportation available. Next to options for customers to compensate the CO2-emissions of their trip, FlixMobility successfully launched biogas-powered FlixBuses in July 2021, e-buses in France and Germany and a long-distance bus equipped with solar panels. Now, the company wants to take sustainable mobility a step further.

On average, every journey on a long-distance bus for a distance of 400km saves 6.6 kg of CO2 emissions per passenger, by switching from private cars to long-distance buses. However, a practical solution for the completely carbon-neutral operation of long-distance bus fleets in regular service is still lacking. That’s the reason for the joint development of a revolutionary mobility solution by FlixMobility, Freudenberg Fuel Cell e-Power Systems and ZF Friedrichshafen AG.

Travelling by bus, 26g of carbon dioxide are emitted per driven kilometre per passenger. On a trip from Munich to Berlin, this would amount to approximately 15.6kg of CO2. Compared to a flight that emits roughly 143kg CO2 equivalents on the same trip, this is a very small amount. Far beyond that, FlixMobility expects the planned fuel cell coaches powered by green hydrogen to save 100 per cent of emissions, resulting in 0g of CO2 equivalents emitted.

While hydrogen-powered buses are already operating on inner-city routes, solutions for hydrogen coaches to operate across long distances are still lacking due to the extremely demanding nature of long-distance bus operations: FlixBuses drive for a total of around 200,000km yearly, with distances of up to more than 1,000km driven per day, and usually only with short stops made. Depending on the number of drivers involved during a trip, the bus will legally have to take a break after four and half hours of driving, which is reached roughly after 450km. For this reason, diesel coach alternatives are favoured as they are able to perform for at least 500km before needing to refuel. Hydrogen offers great opportunities, because it will be able to reach the required range or even more, and refuelling times will be as short as refuelling diesel buses. Thus, diesel buses in the FlixBus fleet can be replaced with fuel cell buses in the future.

Hydrogen itself is volatile and normally has neither a smell nor a colour. Its gaseous molecule consists of two atoms that are to be stored at a high pressure, ideally in meticulously sealed tanks or gas bottles. Hydrogen strives to do one thing: rejoin oxygen and become water. The energy that is needed for its division is then partly set free again by the hydrogen. This effect can be utilised within a fuel cell to produce and utilise energy that is carbon neutral. To run fully emission-free hydrogen buses in the future, FlixMobility is planning to use only green hydrogen produced with sustainable methods and renewable energy for operations and will, therefore, partner with infrastructure and energy providers to achieve this goal.