The proposed redesigned bus network will provide a more coherently planned, higher capacity, more understandable network for those within the Cork Metropolitan Area. 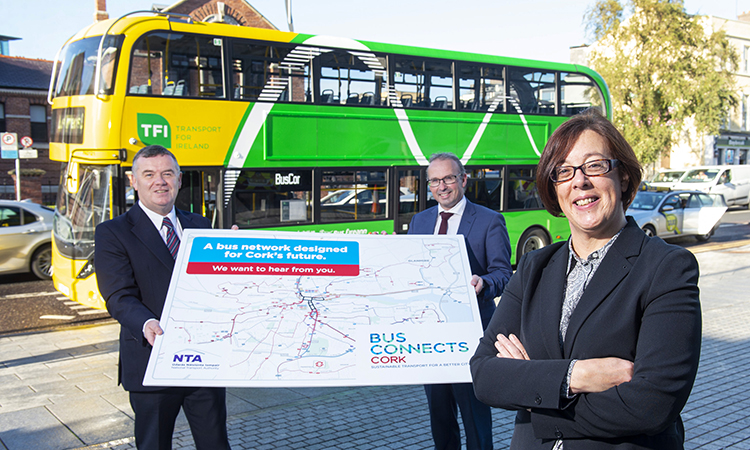 Ireland’s National Transport Authority (NTA) has published its Draft New Bus Network for Cork. The redesign of the bus network is one of the nine key elements of BusConnects Cork, which aims to transform the city’s bus system, making public transport more useful to more people.

Under the proposals contained in the new Draft Network Report, the level of bus services in Cork will increase by 36 per cent, with shorter waits and more direct routes for commuters within the city. Additionally, 34 per cent more people will live close to a frequent service.

The proposals will also result in more residents of the city and areas within the Cork Metropolitan Area having access to the public transport network, with Little Island, Cobh, Carrigaline, Ringaskiddy, Glanmire, Ballincollig and Blarney among those areas with new routes.

The redesigned bus network will provide a more coherently planned, higher capacity, more understandable network for those within the Cork Metropolitan Area, while paving the way for the future introduction of Luas – a tram/light rail system – within the city.

Services will be organised around high frequency routes within the city centre, with route branches extending out to other areas of the city. Additional weekend services will also be provided.

Fares will be simplified in a way that will make interchange seamless. Customers will not have to pay extra to change between bus, rail or future Luas services within that 90-minute period.

The new network report has been prepared by Jarrett Walker & Associates, in collaboration with Bus Éireann, Cork City Council and Cork County Council.

This follows on from the publication of the Choices Report in July 2021, which set out the transport choices that could be used to structure the redesign of the bus network in Cork, and the follow-on public consultation. Close to 1,200 responses were received as part of the first round of consultation.

Consultation on the draft new bus network will run for six weeks. The redesign will be finalised in the first quarter of 2022, with the new network being rolled out from 2023.

Eamon Ryan, Minister for the Environment, Climate and Communications of Ireland, said: “This is a milestone for the BusConnects project, which will make Cork a cleaner, greener and more liveable city. BusConnects in Cork will mean increased services and frequency, making it easier for everyone to choose public transport to get around – be it to school, work or anywhere else. Delivering this project will mean that Cork will have a more efficient and frequent service that people can really rely on to cater for their transport needs.”

Anne Graham, CEO of the National Transport Authority, said: “Cork is a growing city. This brings with it an increasing demand for public transport. Through significant investment over recent years, we’ve seen a 50 per cent growth in public transport usage from 2013 to 2019. However, there is potential to enhance services even further.”

“That’s why, over the past four months, the NTA has been engaging with the people of Cork in shaping a new bus network that meets their future needs. Their responses have helped to inform the draft new bus network, which we’re publishing today as part of BusConnects Cork,” she added.

Graham continued: “The proposed network will bring vital improvements to how the bus system is organised. It will see a significant increase in bus services within the Cork Metropolitan Area, as well as creating new connections to schools, jobs and public services. A simpler network and fare structure will make it easier to get around Cork using public transport.”

“We’re confident that this new network, along with the other changes being introduced through BusConnects Cork, will make travelling on public transport a convenient and sustainable option for more people across the city. We want to hear your views on the new network that has been proposed. By taking part in the online consultation process, we can ensure that the final network design can support the increase in the number of people using public transport in Cork,” she concluded.

Stephen Kent, CEO of Bus Éireann, said: “We are enthusiastic and excited about the transformation that BusConnects means for everyone living, working, studying and socialising in Cork, for the Cork economy and environment. Thinking ‘bus’ instead of ‘car’ positively impacts on quality of life for everyone in Cork, with less congestion, shorter travel times and as our new zero/ low emission fleet also begins to arrive to fulfil our climate action commitments. Bus Éireann’s experience is that increased frequency of services in Cork quickly results in much greater passenger numbers.”

“The new proposed BusConnects network will dramatically change the public transport experience in Cork, and bus services can be enhanced comparatively quickly. We look forward to working with the NTA to facilitate and deliver this new future for public transport in Cork over the next two years,” he added.