Since its launch in summer 2019, Metrolink’s ‘touch in/ touch out’ payment system has proved popular with passengers, with over five million journeys made using contactless payments. 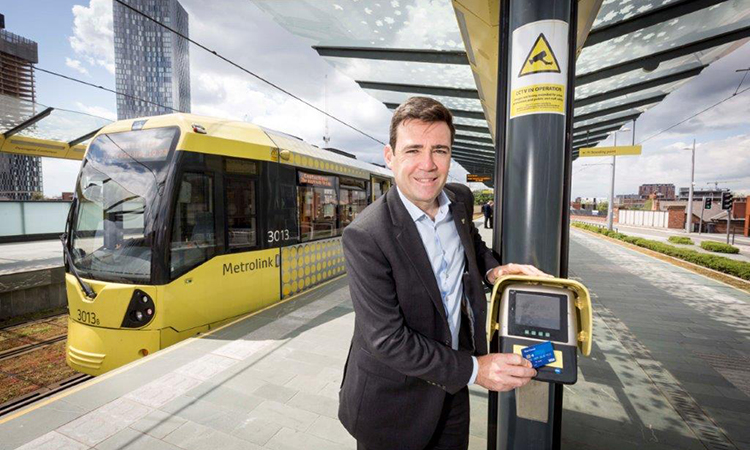 Manchester Metrolink’s ‘London-style’ pay-as-you-go contactless system is proving more popular than ever, with more than five million journeys now having been made since its launch in July 2019.

The tram network’s touch in/ touch out system allows customers to travel quickly, securely and flexibly across the network without the need to download an app or buy a paper ticket.

Initially launched in July 2019, it was further enhanced following the roll-out of the Bee Flex Weekly in September 2021, which means that customers can now travel in confidence knowing that they will never pay more than a seven-day travel pass when they touch-in and out with a contactless bank card or device.

Recent cultural events in Greater Manchester have seen customers embracing the contactless payment system, with 123,000 contactless journeys made during the week commencing 6 September 2021 (during which Parklife at Heaton Park took place, as well as a Manchester United game). On 25 September 2021, 40,000 journeys were made using contactless payments, and a new weekly record of 141,000 journeys was set during the same week as the region hosted a number of major events, including the Courteeners at Old Trafford and the Great Manchester Run.

Andy Burnham, the Mayor of Greater Manchester, said: “By making tram travel easier, more flexible and providing value for money for our residents and visitors, pay-as-you-go has been a real game-changer for Metrolink customers. I’m delighted by how well it has been received, and I’m sure that its popularity will only grow following the recent introduction of the Bee Flex Weekly. It shows what we can deliver locally and is exactly what I want to see across – and integrated with – all our other modes of transport. Our plans are ambitious but achievable and can be the foundations for levelling up the north. Having the Conservative Party Conference in Manchester is a great opportunity not only for me to share our vision with government, but to discuss how we can work together to get there – because, ultimately, we need them to come with us on this journey.”

The five million journey mark was passed on 17 September 2021.