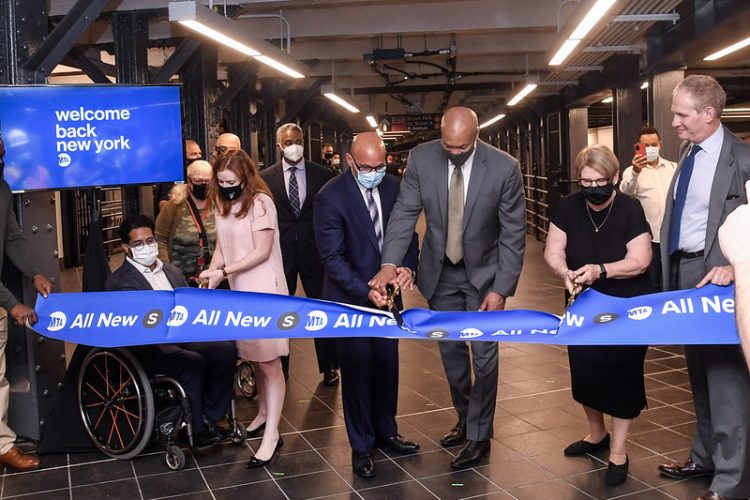 New York’s Metropolitan Transportation Authority (MTA) has celebrated the completion of the new 42 St Shuttle that connects Times Square and Grand Central Terminal. The work is the centrepiece of the broader 42 St Connection Project, a series of major improvements to the highly travelled corridor.

Despite the pandemic, the MTA says the work was completed on time and on budget, and even includes a striking mosaic installation from world renowned artist Nick Cave.

Authority officials also used the opening of the new Shuttle service to formally launch a new ‘Welcome Back New York’ campaign that touts the benefits of mass transit, as New Yorkers begin to return to work and school in the aftermath of the pandemic. The campaign includes a range of specific initiatives to entice riders to come back to the system, including the extension of discounted fares during off-peak hours until the end of the year and a new goal of doubling the number of New York City residents engaged in the City’s Fair Fares program that provides discounted MetroCards to customers in need of financial assistance.

“This project had been talked about for literally decades and now we’ve finally gotten it done,” said MTA Acting Chairman and CEO Janno Lieber.

“The new, fully ADA-accessible Shuttle is easier to navigate, with straightened tracks and a single, wider platform that will allow us to run longer trains during peak hours and speed up boarding times. This is a huge win for our customers as they continue to return to the system.”

“I’ve been at the MTA for over thirty years and rebuilding the Shuttle has been a topic of discussion that entire time. It’s amazing to finally see it get the renovation New Yorkers deserve, especially at this critical moment for the system and our region,” added New York City Transit Interim President Craig Cipriano.

The 42 St Connection Project brings straightened tracks and expanded platform space, allowing more room for customers and ensuring that shuttle access is fully accessible in compliance with Americans with Disabilities Act (ADA) standards. The MTA says the consolidated platform will make it easier to identify and board the next available train as quickly as possible, and simplified and extended tracks allows the Authority to run longer cars. This, in turn, increases customer capacity by 20 per cent during peak times.

Prior to the pandemic, the 42 St Shuttle carried some 80,000 customers daily, including upwards of 10,000 per hour during morning and evening rush periods. The project also includes free underground connection to the 42 St Bryant Park Station, wider stairwells on the Grand Central mezzanine, a new street-to-mezzanine elevator at the Times Square Station, and new electrical, communications, signal and fire safety systems.