Singapore study reveals benefits of e-scooter use in transport networks

The study shows that e-scooter use is most likely to be highest when transfer and walking time between transit journeys is the longest, with e-scooters providing valuable last-mile benefits. 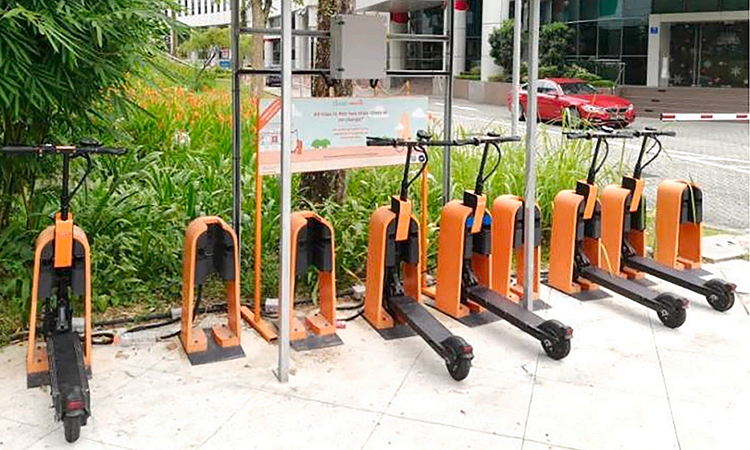 A new study by scientists from Future Urban Mobility (FM), an Interdisciplinary Research Group (IRG) at the Singapore-MIT Alliance for Research and Technology (SMART), MIT’s research enterprise in Singapore, has found that e-scooters, while considered by some to be a hazard to pedestrians and others, provide an important alternative mode of transit, particularly in urban areas. This study sheds light on the growing utility of e-scooters as a micromobility service in Singapore, and it’s hoped it will also inform operators, planners, and policymakers on how best to harness and regulate this growing mode of mobility.

This new study is described in a paper titled, “E-scooter sharing to serve short-distance transit trips: A Singapore case”, published recently in Transportation Research Part A: Policy and Practice. The paper was led by Zhejing Cao, PhD researcher at Tsinghua University when she was a visiting SMART FM student, and co-authored by SMART FM Lead Principal Investigator and Associate Professor at MIT Department of Urban Studies and Planning, Jinhua Zhao, and Xiaohu Zhang, an assistant professor at The University of Hong Kong, as well as Kelman Chua and Honghai Yu from Neuron, a Singapore e-scooter sharing operator.

Having first been introduced in Singapore around 2013, the e-scooter, also known in Singapore as a type of Personal Mobility Device (PMD), grew swiftly in popularity as an affordable and convenient mobility alternative to driving on Singapore’s often congested roads during peak hours. The number of e-scooter users grew rapidly, swelling to around 100,000 registered e-scooters in Singapore by November 2019. Their popularity, however, came at a cost, with a number of fatal and non-fatal incidents involving e-scooters and their riders colliding with pedestrians, and ultimately led to a government-mandated ban on their use on footpaths across Singapore in November 2019.

In the Singapore Central Area (SCA), despite the high accessibility of the Mass Rapid Transit (MRT) system island-wide, the level of MRT indirectness (ratio of MRT network distance to the shortest street path) can be up to 4.112 – much higher than the global average. Furthermore, 20.98 of MRT trips in SCA have at least one transfer, higher than the average transfer level in Singapore, and passengers may have to walk an average of nearly one kilometre to enter and exit MRT stations.

As a result, even if the origin and destination of a trip are in close geographical proximity, the overall travelling journey may be suboptimal, making it inconvenient to take certain short-distance transit trips due to excessive indirectness, transfer, and walking distance. E-scooters can provide a valuable alternative in this segment. As such, it is valuable to explore and investigate the practicality and potential of using e-scooter sharing to replace certain short-distance transit trips where alternative transit methods may not be convenient.

In this study, the researchers collaborated with micromobility operator Neuron to explore the potential of using e-scooter sharing to replace short-distance transit trips in the SCA. The researchers conducted a stated preference survey of e-scooter users in the SCA and estimated mixed logit models to examine factors influencing a user’s choice of e-scooter and transit. Based on this, the number of transit trips that can be replaced by e-scooters was calculated.

The researchers found that fare, transit transfer, and transit walking distance have significant negative impacts on mode utilisation, with seemingly random choices among respondents. The uncertainty is higher in predicting e-scooter usage preferences of male, young and high-income groups. In analysing the travel demands under different levels of transit inconvenience, the researchers discovered that a higher level of transit indirectness, more transfers, and longer walking times result in a higher average probability of using e-scooters as a mode of transit.

“E-scooter sharing services have shown enormous potential to become an important component of transit systems in urban environments in Singapore and other cities worldwide,” said Zhejing Cao, lead author of the study.

“Our study has highlighted the shortcomings of public transport in serving short-distance journeys in the SCA. E-scooter sharing services are able to bridge this gap and provide a convenient micromobility service to the public.”