A new model of electric bus is set to be trialled in Barcelona which can operate for a full day on a single charge, eliminating the need for supplementary charging infrastructure. 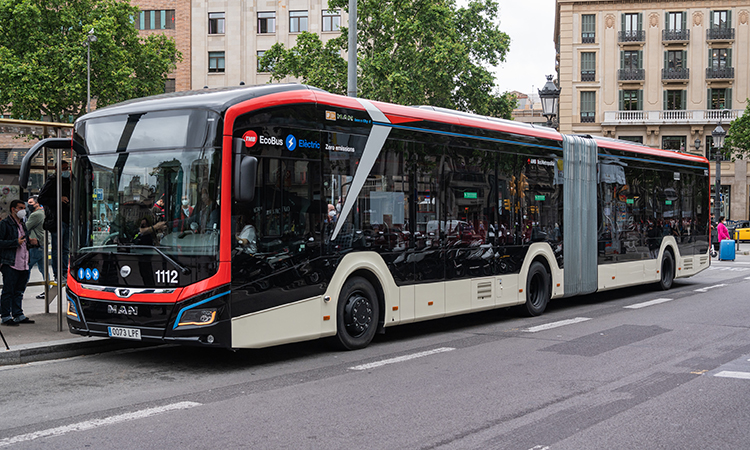 The new e-bus can carry up to 120 passengers Credit: TMB

From this July, Transports Metropolitans de Barcelona (TMB) will launch a year-long test of the Lion’s City 18E electric bus, an articulated bus manufactured by MAN that stands out for its extensive range and zero emissions.

Barcelona will become one of only two cities in Europe (the other being Cologne, Germany) to have a test unit of this -metre long, high-capacity bus that can carry out a day’s service with only an overnight charge of its batteries.

The 18-metre articulated bus is powered by two central electric motors located on the second and third axles. Unlike electric motors that are located close to wheel hubs, their position facilitates accessibility for mounting and allows for a simpler design of the entire drive system. The configuration of its electric powertrain, which does not require a transmission system between axles, benefits the space available on board and optimises the rear of the vehicle so that the bus can carry up to 120 passengers.

A total of eight battery packs are located on the roof of the vehicle where, as with the motors, easy access reduces maintenance costs.

The new vehicle is equipped with a DC fast-charging system using the Combined Charging System (CCS) standard, which achieves an average output of 100 kW (150 kW peak), enabling it to be ready for operation in just four hours. According to the manufacturer, the Lion’s City 18E has a range, guaranteed for the life of the batteries, of 200 kilometres on a mixed route and up to 270 in favourable conditions.

This is key since the most efficient articulated electric buses marketed so far in Europe combine night-time charging with charging during rest time at terminal stops, which means equipping the network with charging infrastructure.

TMB’s Bus Engineering Department has had the Lion’s City 18E on loan from MAN since the beginning of the month and has been equipping and adapting it for its entry into commercial service next July. It will initially provide passenger transport services on the H16 line, on which other articulated electric buses operate, to allow for comparison of their operating data and performance. It will later provide service on other high-demand lines in the TMB network.

Barcelona’s bus network is in the midst of a transition towards decarbonisation and greater efficiency. The roadmap for the adoption of green energy anticipates acquiring 210 battery electric vehicles in the 2021-2024 period. Three high-demand bus lines – H16, H12 and V15 – will switch to e-vehicles in the short term. TMB says its aim is for 50 per cent of its fleet to run on electricity by 2030.

Glimble: Arriva Group’s answer to the delivery of MaaS