Here we round up all of the latest developments in sustainable buses around the world. In volume ten, the state of Victoria spends big on electric buses, and Dublin gets its very first Hydrogen-powered vehicles.

The Premier of Victoria Daniel Andrews has announced that the state’s 2020/21 budget will invest A$20m in a three-year, state-wide trial which will “investigate solutions to achieve a zero-emission bus fleet and create a pipeline of local job opportunities”.

The Labor Party administration says that the trial in Australia’s second-most populous state (which includes the city of Melbourne) will “support the Victorian economy with a boost to the transport equipment manufacturing and electricity supply sectors, driving the local development of skills and innovation and contributing to regional economies where some existing manufacturers are already established.”

The trial was launched through the Hydrogen Mobility Ireland (HMI) initiative, which includes stakeholders from both the transport industry itself as well as academics. The hydrogen fuel cell buses ran on different routes by CIÉ Group (the Republic of Ireland’s biggest transport provider), bus companies Bus Éireann and Dublin Bus, as well as by Dublin City University (DCU) and Dublin Airport over a number of weeks in November and December, albeit carrying limited passengers due to the current COVID-19 restrictions.

The Irish Government says that the results of the trial will form part of the decision-making process when it comes to transitioning the public transport fleet to more sustainable fuels and technologies. 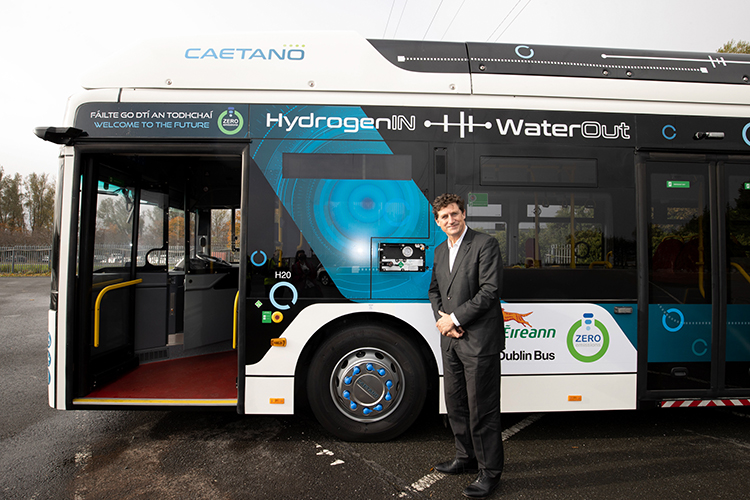 After 18 months of preparation, Bergen’s 100 per cent fossil-free bus fleet began commercial service this week. In June 2019, Skyss (the transport provider in Bergen) awarded Keolis a 10-year contract which it says is worth over €400 million to operate and maintain 138 green vehicles.

Bergen’s bus fleet now features 102 all-electric Yutong buses 10 Solaris trolley buses, and 26 Volvo HVO2 buses. The vehicles are expected to run a total of 5.7 million kilometres a year, which Keolis says will reduce CO2 emissions by around 85 per cent over the life of the contract and make quality of life even better for Bergen’s nearly 300,000 inhabitants. According to the company, replacing a diesel bus with an electric vehicle saves some 50 tonnes of CO2 a year.

Meanwhile, Bergen’s Mannsverk bus depot was upgraded and outfitted with recharging infrastructure able to charge up to 91 buses simultaneously. Overnight charging takes 5-6 hours and enables the buses to run for seven to 10 hours, depending on operating conditions.

Northern Ireland’s two major cities Belfast and Derry, County Londonderry, will get their hands on 100 zero emission buses next year as part of a £66 million investment by the Northern Irish Government. A remaining 45 low-emission buses have been reserved for Ulsterbus, which runs services outside of the capital Belfast.

Translink, the transport operator in Northern Ireland, says 80 of the 100 buses bound for Belfast and Londonderry will be battery electric vehicles, while 20 will be hydrogen powered.

TMB says it plans to purchase 210 battery-powered electric vehicles, 46 hydrogen and 154 gas hybrid vehicles during the 2021-2024 period. This means that over the next four years, 100 per cent of the fleet’s new additions (410 units) will be clean vehicles, while 62 per cent will be zero emission.

“Europe is calling for specific plans and actions, so TMB has taken on the challenge of decarbonisation and intends to put it into practice,” said TMB President Rosa Alarcón.