E-scooters come to Liverpool as part of Voi pilot scheme

Voi’s year-long e-scooter trial in Liverpool is one of more than a dozen Department for Transport-backed pilots taking place across the UK. 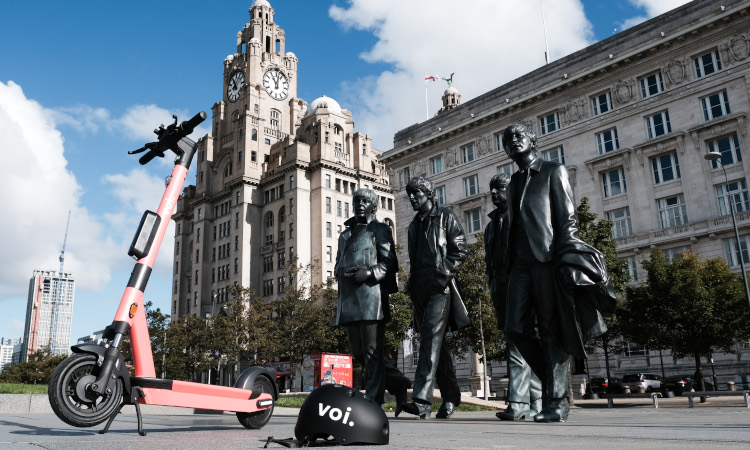 People in Liverpool will be able to try a new way of getting around the city centre as a new year-long trial of e-scooters led by Voi begins.

The pilot scheme, a joint initiative of Liverpool City Region Combined Authority and Liverpool City Council, will see Swedish-based Voi initially bring around 50 of its carbon-neutral e-scooters to the city for public hire, with more to follow as the trial continues.

The e-scooters will be available for hire from 6 October 2020 via mobile app, with scooters placed in key positions across the city – such as the shopping and commercial districts, as well as near to the University of Liverpool and LJMU campuses.

The trial area will cover Liverpool city centre, extending from the city’s historic waterfront to its Knowledge Quarter, Georgian Quarter and the Vauxhall area to the north of the city centre.

The vehicles will travel at a maximum speed of 10mph, but their speed will be electronically restricted to around five miles per hour in areas with high footfall in order to ensure public safety.

Supported by Department for Transport, the Liverpool e-scooter trial is one of more than a dozen taking place across the UK, including in the West Midlands and Northampton. It is hoped that the vehicles can be used to support public transport and provide a new low-carbon mode of transport, particularly vital at a time when vigilance around social distancing is required.

The scheme has also been designed in close consultation with disability associations, including the Royal National Institute of Blind People (RNIB).

Steve Rotheram, Metro Mayor of the Liverpool City Region, said: “I want our area’s transport network to be as cheap, quick and green as possible. E-scooters could offer residents and tourists alike a quick and convenient way to get around the city centre, as happens in many European cities. We will be working closely with the council and police to monitor the scheme and make sure that the scooters are being used safely and properly.

”If the trial goes well, then we can look forward to seeing these scooters play a role in my plans for a London-style transport system.”

Initially the vehicles will only be available to users between 6am and 10pm, in line with national COVID-19 restrictions around the opening of restaurants and bars. Only e-scooters which are part of the trial are currently allowed in Liverpool, with the use of private e-scooters remaining illegal in the UK.