A fleet of nine new hybrid cars are now available in Harrogate town centre for pay-as-you-go hire around the town. 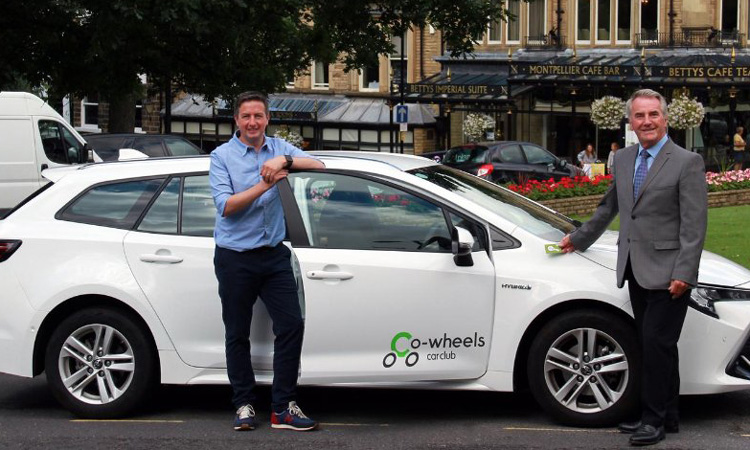 Co-wheels, the independently-owned national car club, has announced that it is working in partnership with Harrogate Borough Council to launch its first all-hybrid car share club in the Yorkshire town.

In a another first for the firm, cars can be rented without fixed parking bays, meaning the cars can be collected and parked all around Harrogate. Each car has its own designated zone, and comes with a pass which allows parking anywhere in the area thanks to support from North Yorkshire County Council.

When booking a car, a location map on the Co-wheels app or website shows where the nearest one is available. Members are then emailed 15-minutes before the hire with the exact location of the car, which is also shown on the location map in the app. Keys are not needed as members are provided with a smartcard to access the car.

Richard Falconer, Managing Director of Co-wheels, said: “There’s a lot of great work going on to reduce carbon emissions in Harrogate which we are pleased to support with the launch of this new car club. We’re making it more accessible for people to have the option to hire a car when they need it rather than having to own a vehicle – it’s far cheaper and better for the environment this way. To celebrate the launch, we’re offering people in Harrogate £1 memberships and £40 credit to try our service.”

The club has been welcomed by Harrogate Borough Council and Zero Carbon Harrogate, whose chair has already become a member. Councillor Phil Ireland, Harrogate Borough Council’s cabinet member for sustainability and carbon reduction, said: “We have ambitious plans to improve air quality and reduce carbon emissions across the district. One way to support this is by encouraging people to reduce the number of cars in their household as well as the dependency of owning a car.

“Partnering with Co-wheels to run a car club scheme across the Harrogate district will give people the confidence to do this and will complement walking, cycling and public transport use.”

Jemima Parker, Chair of Zero Carbon Harrogate, added: “I’m delighted that Harrogate has a car club. Zero Carbon Harrogate has been working with Harrogate Borough Council to bring a car club to the district as shared transport is such a good way to reduce our carbon emission. The club gives you all the convenience of a car when you need one and none of the carbon cost of having a car manufactured just to sit outside your home for 90% of the time. I’m already a member and hope others will sign up and try out this new service rather than pouring money into owning their own vehicle.”