Transport for Greater Manchester (TfGM) is currently making one of the largest investments in Greater Manchester’s bus network for decades – with over 25 miles of the network being either created or improved. As part of this, construction has now started on the region’s first guided busway. Balfour Beatty has recently begun work to clear the route for a 4.5 mile (7km) dual-tracked guided busway to run between Leigh and Ellenbrook, in the west of the conurbation. 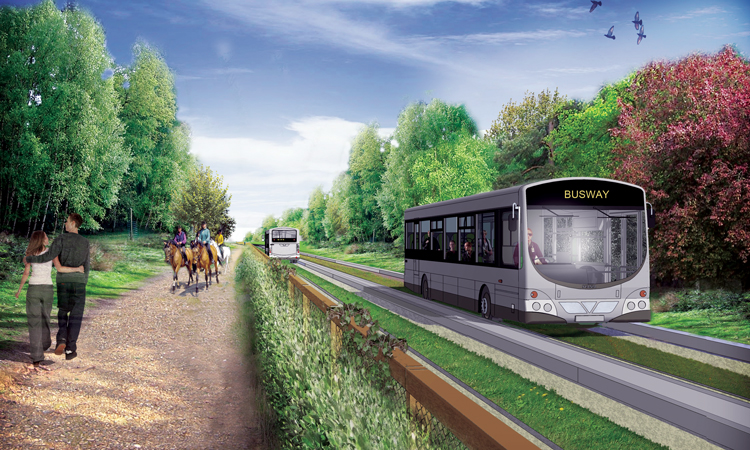 The busway – which will run along a former railway line – will provide a high quality, fast and reliable service which will link-up with 15km of new, segregated on-highway bus lanes on the A580 to provide improved connections between Leigh, Atherton and Tyldesley and Manchester city centre.

Working with our partners, Wigan Council and Salford City Council, this Bus Rapid Transit (BRT) scheme will improve links between local communities along the route. Crucially, it will provide a quick, congestion-free service to and from Manchester and through the heart of the city centre from areas that currently do not benefit from high quality direct public transport links.

In the pipeline since the 1990s, the Leigh–Ellenbrook busway has been a long time in the planning. Local demands for a rail service meant the scheme was greeted with initial scepticism, and the scarcity of similar busways both locally and nationally meant a real effort had to be made to convince the Greater Manchester public of the feasibility and attractiveness of high quality bus links as compared to rail – or the region’s popular light-rail system, Metrolink.

Initial public consultations were followed by a Public Inquiry held in 2002, which reported in favour of the scheme in 2005. Transport and Works Act powers followed, and a funding package was finally assembled for the £68 million scheme as part of the innovative Greater Manchester Transport Fund.

The 14 stop busway – seven stops in each direction – is expected to be completed in 2015. All stops will be fully accessible, and will include shelters, CCTV, Real-Time Passenger Information and cycle parking. Key features include a pathway which will run alongside for pedestrians, cyclists and horse-riders. As part of the bus priority package, there will also be three park and ride sites to serve the busway, providing a minimum of 440 parking spaces. These will be located in Leigh, at Tyldesley Interchange and on the A580 East Lancs Road near to the M60/61 junction. These park and ride site locations have been chosen to maximise the use of the facilities and all three sites will be free for passengers to use and are covered by CCTV.

Balfour Beatty has been awarded the contract to design and build the guided busway. Construction is now underway and is scheduled for completion in 2015.

The busway itself will be made up of two concrete tracks on which high quality buses with specially adapted guide wheels will run. Grass will be planted between the concrete tracks of the busway, and there will be gaps in the tracks where public footpaths and roads cross the busway.

We want our passengers to experience a smooth ride and this is a primary objective for the construction of the guided busway. As such, we have imposed a high specification for the finish of the concrete trackway on the contractor. The contract specifies very tight tolerances for the guideway to produce a smooth ride for passengers including a kerb guidance gauge width tolerance of +/- 1mm.

In order to achieve such tight tolerances, the contractor is proposing an innovative technique of high-precision ‘slipforming’ combined with precision post-construction grinding and polishing of the concrete.

Working with the local community

Working with the local community was always going to be crucial to delivering this scheme. The busway runs through some rural areas and along a former railway route that is lined, in part, with residences.

We made our environmental commitment clear from the outset, and a key feature of the scheme is a pathway, which will run along the entire length of the busway, for use by walkers, cyclists and horse-riders. The 4.5m-wide path will be surfaced so that it can be used throughout the year, and separated from the busway tracks by a fence and hedgerow – in keeping with the rural aspect of the area.

We commissioned ecological experts to assess wildlife in the area and a great deal of work has been done, in particular to protect local Great Crested Newts. We’ve committed to replanting two trees for every tree removed as part of the works.

In partnership with the Forestry Commission, we are also creating a new community woodland with 40,000 trees in the Higher Folds area, adjacent to the route. Alongside local meadows, the woodland will greatly increase biodiversity and wildlife habitats in the area and create a real legacy for generations to come.

Through this work we’ve been able to engage with over 20 local schools to educate young people about the benefits of the busway, public transport and the environment. Projects such as planting fruit orchards – and wildlife benches made for schools from local timber – have all fostered good-will and raised the local profile of both our dedicated stakeholder engagement team and the busway.

TfGM is currently undertaking an exercise to procure a bus operator to provide the services that will run along the guided busway and associated infrastructure between Leigh, Atherton and Manchester.

We are committed to using high quality, low-emission buses, and a minimum frequency has been set of four buses an hour from Leigh and four from Atherton to Manchester, during the day on Monday to Saturday. This means that there will be eight buses an hour between Tyldesley Interchange and Manchester. The same minimum service frequency will run in the opposite direction.

Other UK busway systems have rightly set the bar high in terms of quality of service and in keeping with this we want to establish a high quality brand. All stops on the busway will have shelters, CCTV, lighting and real-time information displays.

Integrating the busway with other modes of transport will be crucial. People need the right links to make sure they can make that all important ‘last-mile’. Greater Manchester is currently making multi-million pound investment to become a UK ‘cycle city’. Naturally, there will be covered cycle stands for around 10 bicycles at each stop.

The Cambridgeshire Guided Busway has clearly transformed and invigorated the surrounding areas, both socially and economically. We look forward to seeing a similar impact in the communities living along Greater Manchester’s first guided busway and expect the improved transport links to attract inward investment to areas along the route.

The busway will certainly open up employment, education and healthcare facilities to more people. Services will run past Salford University, and onwards direct to the city centre and Oxford Road corridor just south of the city. This is home to the Central Manchester Hospitals site and both Manchester University and Metropolitan University in the south of Manchester – and a trip currently impossible to make without changing services.

Cambridgeshire County Council’s primary metric for success was whether the scheme would encourage people to shift from car to bus and results show that the scheme has done this and that passenger numbers are well above those originally predicted. This reflects the success experienced on many other similar BRT projects in the UK and globally.

We want people to make a conscious decision to use public transport and the key driver for that will be establishing a strong brand – that conveys the reliability, comfort and ride quality of the service. In particular, we hope this will attract drivers to leave their cars behind and make their journey into the city by bus.

Bringing this BRT scheme to fruition has been a long journey, and with the construction period ahead of us we’re not quite there yet. The months to come will no doubt bring challenges, but on this home stretch both I and the project team are looking forward to seeing the busway take shape on the ground.

Peter Boulton has been Transport for Greater Manchester’s Head of Programme Management Services since 2009. Peter has a wealth of experience in developing and delivering a wide range of transport infrastructure projects including transport interchanges, highways, light-rail and heavy rail schemes. Peter is currently responsible for managing the smooth delivery of over £300 million transport spend on transport projects across Greater Manchester, including the Leigh–Salford–Manchester busway. 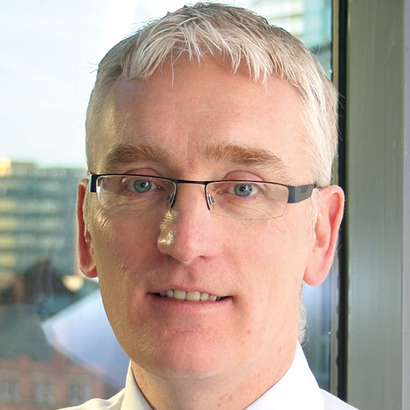