Following the completion at the end of 2012 of the automation of Metro Line 1, the Board of Directors of RATP launched, on 28 June 2013, the automation project of Metro Line 4 – the second busiest line in Paris, with 740,000 passengers a day. Edgar Sée, Project Manager, provides more details about the line development which crosses Paris from North to South, connecting Porte de Clignancourt station in the north, to Mairie de Montrouge station in the south, and is part of the wider RATP metro modernisation programme. 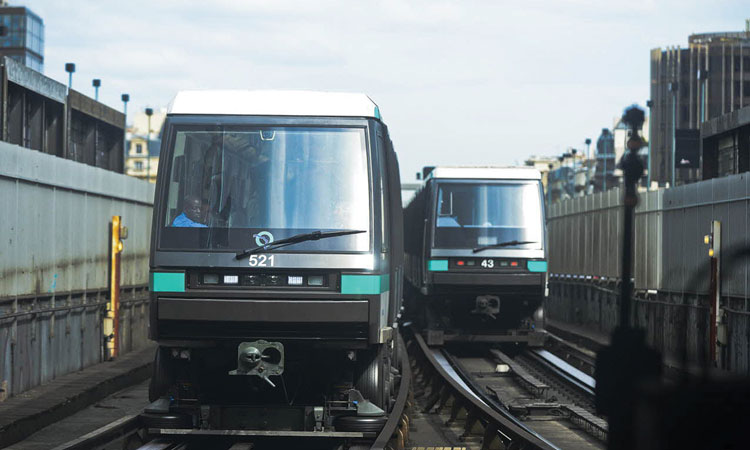 Most of the Paris Metro network was built between 1900 and 1935. In the years between 1955 and 1975, the metro transport system underwent its first wave of modernisation with the emergence of Operations Control Centres (OCC), signal boxes, on-line regulation systems, and an automated pilot system.

Because of the need for regular renewal of equipment, RATP launched a second wave of modernisation that we are currently in the midst of. This modernisation programme has the following goals:

In this context, Metro Line 1 was the first line on the network to be converted from manually driven operation to fully automated operation. Line 1 was chosen because it was the oldest and busiest line of the network, and the level of traffic on it remains high all day long but is subject to route-changes due to large-scale events in Paris. The line also doubles the route of regional trains RER line A (the busiest in Europe).

Automation of Line 1 was completed in December 2012 after a mixed fleet operation period (trains under manual control and trains without drivers operating at the same time). At the time, this modernisation process of automating an operating line without interrupting the traffic was unprecedented in the world; it was conducted with the comfort of the 750,000 daily passengers always in mind.

Dealing with curves and platform screen doors (PSDs) during the retrofit, plus negotiating with the social partners and organising the mixed fleet operation were among the difficulties of the project.

Now the automatic system brings adaptability and potential tailoring to the offer, plus an increase in commercial speed and capacity, eco-driving, strong resilience and traffic reliability improvement. Among the KPIs, the number of trains during peak-hours is now 100%, whereas it struggled to reach 92% before the automation.

And the customers are appreciative: traffic is growing 70% faster on Line 1 than on the other lines of the network.

Carrying approximately 740,000 passengers a day, Line 4 is the second busiest metro line after Line 1 with recurrent overloading during peak and off-peak hours. Line 4 crosses Paris from North to South and serves 27 stations along a 12.1km-long route.

The future 1.7km-long extension of Line 4 will concern the communes of Montrouge and Bagneux in the South of Paris, and will include two new stations.

Line 4 has connections with all the Paris Metro lines and RER (Regional Express Network). Three main train stations (Gare Montparnasse, Gare de l’Est and Gare du Nord), many tourist areas, districts and employment centres are also in the operating area of the line.

Line 4 shows close resemblance to Line 1, and before it was automated the line-equipment was aging and faced recurring problems in terms of regularity. The line’s traffic is very sensitive to events on the streets and the numbers of interconnections with the rest of the network is very important.

The feedback on Line 1 has demonstrated, first and foremost, that the automation of an existing line is technically feasible and that it makes sense within the wider modernisation plan of the Paris Metro; and, secondly, that automation and renovation of transport infrastructure has a significant positive effect on regularity – the reasons for this can include:

The Line 4 automation project and the upgrade of the line infrastructure will help to anticipate substantial gains in terms of regularity, quality of service offered to passengers, flexibility of operation and safety, just like we now experience on Line 1.

The key components of the project

This automation project is estimated to be finished in 2022.

The automated train operation management system can be broken down into two aspects:

1. An OCC allowing operation and maintenance operators to ensure the supervision and control of the system. The OCC is interfaced with:

2. On-board CBTC shuttles which interface with:

The modernisation of the Operations Control Centre

The current OCC installed in November 2001 by the French manufacturer Atos is the first centralised and computerised OCC on the Paris Metro network. For the automation of Line 4, a new centralised OCC will be implemented.

Migration from the current OCC – already modernised – to a new OCC is a huge challenge in comparison with the automation of Line 1. Also, the extension of Line 4 to Bagneux adds one more strain to this delicate project.

The quality of information and communication with passengers is vital for modern metro networks.

The automation project of Line 4 will use the feedback from Line 1 and also on Lines 2, 5 and 9 (with the deployment of new type-MF 01trains, which have on-board modern audio visual equipment, even if the trains are manually driven).

The infrastructure of Line 4 (tracks, tunnel, signalling, and power supply) has reached the end of its life-cycle. The refurbishment of existing equipment is needed, regardless of the choice to automate.

Moreover, signalling continues to be used in degraded mode on an automated line and the proper functioning of the signalling system is essential for the mixed fleet operation phase.

All 29 stations on Line 4 will be equipped with semi-full-height platform screen doors (PSDs). Feedback from Line 14 and Line 1 show that the presence of PSDs plays a significant role in the regularity of operation, and provides an undeniable feeling of safety for passengers.

Their installation will require civil engineering works for reinforcement and the enhancement of platforms knowing that stations have different architecture and construction methods.

Shortly after the extension of Line 14 to the North, automatic shuttles with six passenger cars will be replaced by the new generation of rolling stock type-MP14 with a higher capacity (eight passenger cars).

Most of these shuttles must be redeployed on Line 4. A new generation of rolling stock (about 20 shuttles with six passenger cars) acquired in the future (type-MP14) will complete the future Line 4 rolling stock fleet.

Ultimately, Line 4 will operate with three different types of automatic rolling stock: MP89 and MP05 from Line 14, and MP14 (six passenger cars), which will generate an additional challenge in the development of the automatic system.

For the success of the project, interfaces between sub-projects will have to be tightly managed. For example, thanks to the feedback from the automation of Line 1, we now know how crucial it is to take into account the critical interface between civil engineering and PSDs. Moreover, particular attention must be given to the organisation of night works. Careful planning of these works will be necessary; it should take into account the requirements of high quality of communication for passengers on the project and its impacts on the operation.

The complexity of the project is also due to the need to control interactions with many other projects or activities of maintenance. In addition, Line 4 will have an exceptional concentration of worksites between 2015 and 2018.

All this makes the automation of Line 4 automation a huge challenge that only an integrated company can face. RATP – thanks to its experience in operations, maintenance and engineering – is able to carry out such a project, as shown in the past.

The automation of Line 4 will increase its capacity, regularity, quality of service, reactivity and security. As for Line 1, the goal is to complete this project without interrupting passenger traffic.

This new project will allow the RATP group, owner of the operation, to strengthen its leadership in the field of complex modernisation projects, which is based primarily on its integrated model and its high-tech engineering experience.

Edgar Sée graduated as an Engineer from Ecole Nationale Supérieure des Mines de Paris. He joined RATP in 2003 and occupied several posts in operation – especially during the automation project of Metro Line 1 – before becoming Head of Metro Line 14 in June 2011. In September 2013, Edgar was appointed as Project Manager for Metro Line 4 Automation.