Over the past 50 years, there have been significant developments in mass transit signalling. As the technology developed, new solutions emerged, ready to answer to the increasing demands of customers. For urban lines, the capability of metro systems to transport large numbers of passengers in the shortest possible time has become the top priority. Since the first deployed project in 1980, Communications-Based Train Control (CBTC) systems have become the most common choice for operators for new and expanding urban rail lines. These systems have not only brought high grades of automation into operations, including unattended operations, but have approached theoretical capacity limits. Technical Affairs Manager at UNIFE, Peter Gurník, discusses the EU FP7 project, Next Generation Train Control (NGTC), and its task to analyse the commonalities and differences of required functionality of both ETCS and CBTC systems. 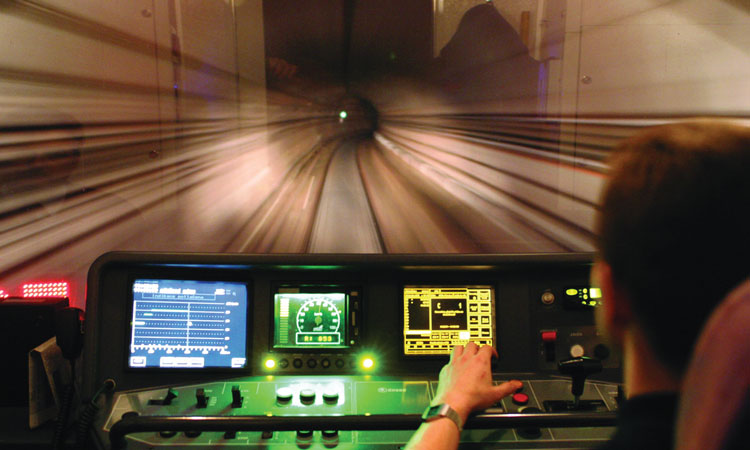 During the last couple of decades, mainline railways in Europe were facing slightly different challenges. Until the end of the 20th century, the evolution of middle- to long-distance rail operation was purely in the hands of the national rail companies. As a consequence, the European rail network was technologically fragmented, cross-border operation costly and in most cases uncompetitive. Starting from the early-1990s, the European Commission together with all the relevant stakeholders has taken decisive actions leading to the development of a common Automatic Train Protection System (ATP), also known as the European Train Control System (ETCS). Since then, ETCS is being gradually deployed in Europe, and will replace more than 20 existing national ATP systems. ETCS has also proved to be successful worldwide, with its standardised functionalities and track-to-train messages, it is providing full interoperability between the signalling infrastructure and the trains.

Even though both ETCS and CBTC systems were originally designed having different markets and objectives in mind, it seems that some of the actual customer needs for urban and mainline suburban railways have started to approach each other. Interoperability has become the topic for a couple of urban rail projects, dealing with the increasing number of commuters in large conurbations. The big challenge for them is to effectively inter-connect specific existing and future lines, supplied by different manufacturers, with adjacent suburban/regional rail systems. On the other hand, mainlines, in highly populated areas, are reaching their current capacity limits. Advanced train control technologies, some of them known from mass-transit railways, have the potential to double the line capacity without the necessity of building new infrastructure. Interchangeability of system components through well-defined interfaces is a welcomed system property, helping operators securing their signalling technology investments and decreasing related costs through the competition among suppliers.

Next Generation Train Control (NGTC) is a three-year research project running in the frame of the EU FP7 programme. Starting in September 2013, the Project Consortium is now fully-functional with the active participation of more than 100 signalling engineers, having the practical experience from CBTC and ETCS implementations. A number of key urban and mainline railway related organisations participate in this project. In particular UITP, RATP, TMB and London Underground are sharing their expertise with the leading signalling system suppliers such as Alstom, Ansaldo STS, AŽD, Bombardier, CAF, Siemens and Thales. Similarly, SNCF together with the ERTMS Users Group, representing 11 European infrastructure managers, are also actively providing their expertise.

The crucial task of the project is to analyse the commonalities and differences of required functionality of both ETCS and CBTC systems. Subsequently, the common functions of train control systems will be identified and common core specifications will be developed, by evolving ETCS functionality utilising CBTC system solutions in order to achieve maximum synergies. A major condition for the success of this programme is to preserve the backwards compatibility with the current ETCS Baseline 3 specifications in order to protect the already large investments made by the mainline railway customers and suppliers.

Nevertheless, the goal is not to develop a ‘one-size-fits-all’ system1, but to make progress for all railway domains in terms of increasing the commonality in system design and hardware, with various benefits including increasing economies of scale for suppliers. Customers will benefit from being able to choose the most competitive supplier, based on the standardised functions and interfaces.

The NGTC project was designed to feed directly into the Shift2Rail project – the European rail joint technology initiative with a budget of almost €1 billion, focused on the research and innovation and market-driven solutions for new and advanced rail technologies. Based on the results achieved in NGTC, the systems solutions will be further developed and integrated into the advanced JTI’s Technology Demonstrators, which are supposed to validate proposed concepts.

Currently, both categories of systems (CBTC, ETCS) have different (communication) message structures, highly dependent on the installed, often very complex, infrastructure elements. Future evolution of ETCS messaging will have an impact on standardised messages, which will be supporting functionalities such as short headways between trains, moving block, and will facilitate the transitions between urban and mainline systems. The developed new common message structure within the NGTC project will also be validated by a safety model. Subsequently, through simulation, it will be shown that the proposed message structure, field element densities and timing scales are suitable for urban and mainline applications and for transitions between them for various operational scenarios.

‘Moving block principles’ is another major NGTC topic that has the potential to improve the transport capacity of railway lines, reduce the cost of the signalling installation and maintenance, and increase the reliability of the service. The aim is to define common ‘moving block’ concepts and principles in a generic way, applicable to different railway types. This will be based primarily on the practical experiences within urban railways, but will also take into account the current ETCS specifications (Baseline 3).

Modern radio-based communication technology is developing quickly and can provide rail control systems with upgraded data throughput and quality of service, while maintaining specified connection services for decreased installation and operational cost. The objective of the project in this case is two-fold: firstly, to determine a common set of requirements for an IP-based radio communication for urban and mainline train control systems, secondly to explore and identify possible technical solutions for the underlying radio communication technology.

A final main task concerns the use of satellite positioning in relation to the newly developed rail systems. Based on the ETCS application, the project will research the applicability of a standardised satellite-based localisation functionality, primarily targeting low traffic / low density lines (with a relatively simple layout and a good visibility of satellites), where it would be possible to avoid the installation of physical localisation balises. However, in the case of critical locations such as tunnels, deep valleys, critical distribution of buildings along the line, a reduced number of physical balises could still be applied or alternative solutions could be investigated.

Next steps for reaching the project objectives

Reaching the mid-term of the project, there are already a number of results, including the comparison analyses of ETCS – CBTC functional requirements and the specification of the satellite positioning receiver parameters related to interoperability, just to name a few. To the full benefit of the signalling expert community, most of the project documentation will be freely downloadable from the NGTC website2. Strong project links to other initiatives and organisations, including UNISIG and Shift2Rail, confirm the relevancy and competence of the project towards the future train control systems developments. During the upcoming period, the project partners are committed to work closely on system specifications, integrating the required functionalities for the future CBTC and ETCS systems, fully benefiting from the identified areas of system convergence.

Peter Gurník has been involved in R&D activities for the railway signalling sector since 2004 and currently acts as a Technical Affairs Manager at UNIFE. He is responsible for coordination and the support of EU-funded projects. He has a technical engineering background, covering expertise in railway signalling systems and satellite positioning. Peter has been previously involved in various signalling R&D projects; he was taking part in the UNISIG Working Group and acted as the R&D Section Manager at AŽD Praha Company.