The Environmental Assessment and Water Research Institute (IDAEA) of the Spanish Research Council (CSIC) and Transports Metropolitans de Barcelona (TMB), the main operator for passenger transport in Catalonia, are working together to monitor and improve air quality in the subway environment, with the support of the LIFE Programme of the European Commission. The work is taking place under the auspices of the IMPROVE LIFE1 project for ‘Implementing Methodologies and Practices to Reduce Air Pollution of the Subway Environment’ which was launched in October 2014 and will last until March 2018. Joint IMPROVE LIFE partners Teresa Moreno (Tenured Scientist, IDAEA-CSIC) and Eladio de Miguel Sainz (Head of the Environmental Department, Transports Metropolitans de Barcelona (TMB)) provide more details. 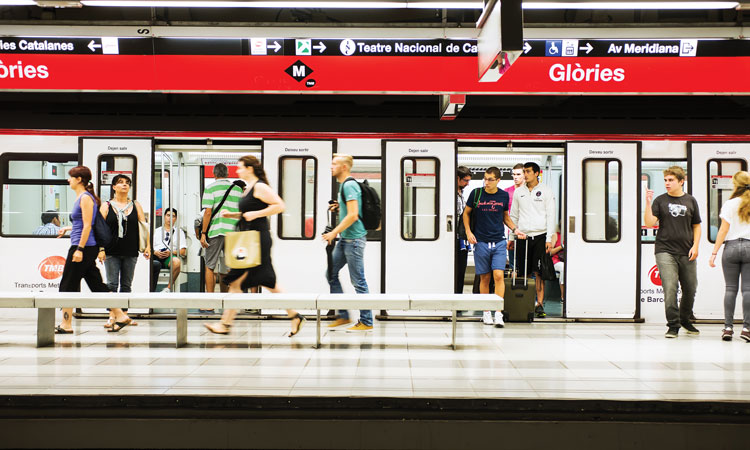 The aim of the IMPROVE LIFE project is to assess air quality in the metro and propose mitigation measures to ensure cleaner public transport, which will benefit both users and employees. Measurements are being taken during normal operations and during activities that can generate dust, such as track or ballast renovation. The first measuring equipment was installed on the platform of La Sagrera station (Line 5) to measure the influence of rail maintenance during night works; they were later moved to Palau Reial station (Line 3) where ballast was being replaced in the tunnel. The air quality measuring campaigns are scheduled to continue until September 2016 and will collect samples from a wide range of stations and sampling conditions in the Barcelona Metro.

In each campaign, the number and mass concentration of particulate matter (PM), CO and CO2, as well as filters for PM chemical composition analysis are being sampled, both in stations and on-board trains. The chemical analyses in the laboratory of railway components such as brushes for electric motors, rails, brake pads, the stone ballast, electric wires and bands of contact for the catenary that can emit air particles are also being carried out to link these particle sources to the concentrations of PM in the metro environment.

Air in the underground environment contains contaminants from the external environment plus others resulting from internal processes such as the abrasion of the train wheels in contact with the rails, brake pads, electric pantographs/catenary, and also cleaning and night maintenance work. Results from preliminary studies have shown that particle levels are in the range of other European subway systems, and are highly dependent on the characteristics of each station. For example, the air quality is best on the automatic lines with physical separation between train and platform with platform screen door systems, or inside the trains as a result of the permanent filtration of air through the air conditioning system.

Within the IMPROVE LIFE project, a more thorough exploration of the atmosphere that permeates the underground stations will be conducted in order to propose measures to reduce the presence of particles harmful to health. For example, it will be studied if:

To inform researchers, stakeholders, public and private organisations and the public in general about the progress of the project, an Open-Forum on Air Quality in Subway Systems was held on 7 May 2015 in the CSIC central offices in Barcelona. The meeting opened with our welcoming address and during the workshop the primary objectives of the project and its defined Actions and Deliverables were shown, stressing the importance that is being given to open communication of all the results produced during the work programme1. Other presentations about the Barcelona Metro included:

An overview of what is currently known about personal exposure to inhalable subway PM, demonstrating how air quality in this system is better in the trains than on the platforms; improved by installing platform screen doors in stations; better during the summer months when ventilation systems are running at higher speeds; worse in confined stations such as those with a single tunnel and only one platform, and worse in the city central, most congested part of the metro line2.

An explanation of the techniques used to identify the various sources of PM in the metro environment, demonstrating how the particle chemistry is rich in carbon and especially iron, mainly due to the contribution from rails, wheels and brake pads3.

A list of the kinds of organic chemicals present in metro air, identifying the obvious presence of various fragrances worn by passengers, as well as limited contributions from diesel fumes from night maintenance work, cigarette smoke (despite the underground ban on smoking), outdoor traffic emissions, outdoor biomass burning (especially in the outskirts of the city), lubricant oils, and, in the newer stations, plasticisers4.

The descriptions of the techniques used to sample bacterial and viral particles present in metro air and sourced from humans with several types of bacteria being clearly present and being similar to those recently described from a study on the New York subway. Overall concentrations of bio aerosols in Barcelona Metro air are comparable to low levels in typical indoor air5.

There were also presentations on other metro systems, such as Mexico City6 and Paris7.

The discussion highlighted key aspects on air quality improvements during city commuting, that in the case of the underground environment are likely to involve the adoption of new or improved systems of maintenance and energy use, such as regenerative braking and the use of intelligent sensors to allow monitoring and control in real-time.

It was concluded that, taking the long view, outdoor air quality in cities is showing a general trend towards improvement. As outdoor urban air gets cleaner, more attention will inevitably focus on the question of indoor air, including that in the metro environment.

The IMPROVE LIFE project is supported by the EU LIFE programme dedicated to promoting actions to protect the environment and conservation of nature and climate, which provides 50% of the total budget of € 813.727. The results of the study will be published and made available to public rail transport operators around the world, so that the recommendations can be applied in other networks beyond the metro in Barcelona.

Teresa Moreno is a Tenured Scientist at the Institute of Environmental Assessment and Water Research (IDAEA) of the Spanish Research Council (CSIC). She has a degree (1992) and an MSc (1993) in Geology from the Universidad Complutense of Madrid. She worked in the Spanish Geological Survey (1993–1995) before completing her PhD in Geology at the University of Cardiff (UK, 1999). Teresa has completed post-doctoral studies in the University of Colgate (U.S. Fulbright, 2000), and branched into mineralogy and geochemistry of airborne particulate matter while a Research Associate at the University of Cardiff (2001–2004) working for the British Medical Council. Since 2004 she has brought her expertise on air pollution back to Spain, first as a Ramón & Cajal Researcher and then as a Tenured Junior Researcher in the IDAEA-CSIC institute where she was promoted to Senior Researcher in 2007. Her main research is based on the evaluation of levels, chemical composition and sources of atmospheric pollutants, especially those involving toxic metals. The practical applications of her research relate mainly to the impact of air pollutants on human health and the consequent need to devise contamination abatement strategies. Teresa is currently the main coordinator of the IMPROVE LIFE project on air quality in the metro system.

Eladio de Miguel Sainz is Chief Officer of Quality and Environment for Transports Metropolitans de Barcelona (TMB), in charge of defining and promoting implementation of the environmental and quality management system. After graduating in law, he was a Labour and Social Security Inspector, and Personnel Officer at Ciudad Sanitaria Vall d’Hebrón in Barcelona and at the Port of Barcelona before joining TMB.