Accessibility of public transport in Bologna 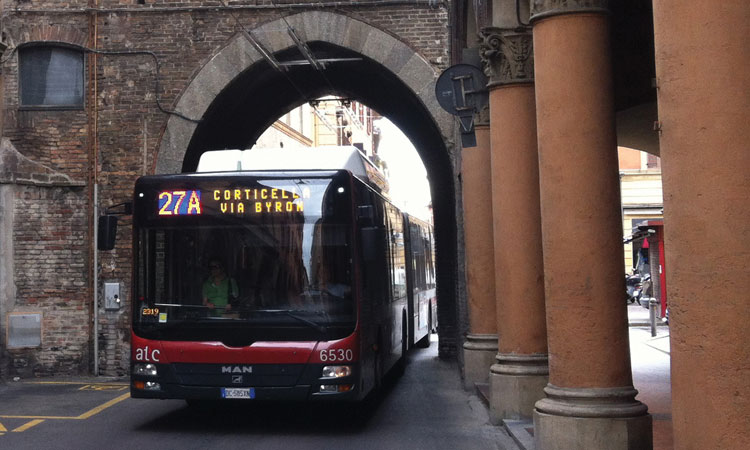 Accessibility when related to public transport can be defined as the ability to access and benefit from a system or network. Furthermore, accessibility must incorporate a ‘universal design’, creating a system that can be used by people with reduced mobility, and operating within a wide range of situations. And there’s also the element that the availability of a transport service, or a lack of, can influence many factors that surround the concept of social exclusion.

The elderly and people with disabilities make up a vital part of today’s society and have a lot to contribute, but they must have the ability to travel easily, especially with access to remote areas/neighbourhoods. The availability of public transport services for all, in particular in deprived or peripheral areas, creates a vital link for everyone to access urban facilities and services.

The concept of accessibility can be included in the concept of sustainability, having in mind its three aspects: social, economical and environmental. A definition by the World Business Council for Sustainable Development, refers to ‘sustainable mobility’ as: ‘the ability to meet the needs of society to move freely, gain access, communicate, trade and establish relationships without sacrificing other essential human or ecological values today or in the future’.

Sustainable transport is a common objective for both European institutions and local administrations.

Regulation (EU) 181/2011 concerning the rights of passengers in bus and coach transport and amending regulation (EC) no 2006/2004 states that: ‘bus and coach passenger services should benefit citizens in general. Consequently, disabled persons and persons with reduced mobility, whether caused by disability, age or any other factor, should have opportunities for using bus and coach services that are comparable to those of other citizens. Disabled persons and persons with reduced mobility have the same rights as all other citizens with regard to free movement, freedom of choice and non-discrimination’.

A European Accessibility Act was proposed in late-2012 which established standards within member countries for accessible products, services, and public buildings. The harmonisation of accessibility standards within the EU ‘would facilitate the social integration of persons with disabilities and the elderly and their mobility across member states, thereby also fostering the free movement principle’.

The UNI EN-13816:20022 is the European standard for the detection of service quality of transport companies in public transport. It establishes parameters so that operators of collective passenger transport services are able to assume commitments to quality and schedule a service that meets the needs and expectations of their customers. The standard incorporates specific definitions of accessibility as a key quality element.

SRM, as the public transport authority for the metropolitan area of Bologna, and TPER, the local public transport operator, cooperate in order to continuously improve the accessibility level of the services they provide.

In Bologna, these guidelines are put in place with a number of different ‘hard’ and ‘soft’ measures, including:

The public transport operator is committed to equip a high number of vehicles with better ‘access’ features in order to increase accessibility. The fleet includes approximately 1,100 vehicles with, at the moment, only one in four buses being equipped to board people with disabilities. Approximately 64% of its ‘urban’ fleet is equipped with manual wheelchair-ramps, whilst only 11% are equipped with electronic ramps.

The situation is very different for sub- and inter-urban services, where only 38% of vehicles are equipped – 24% with manual equipment and 14% with electronic equipment.

‘Reliability first’ – this is the rule that TPER applies and the reason why a higher rate of manual equipment is present. The trend is now a standard among EU operators because these kinds of equipment are more efficient and reliable.

The commitment of the company is strongly focused on continuously increasing accessibility.

A call centre has been available for passengers to call to obtain information, but now the operator offers the possibility to reserve an equipped bus for a specific trip. The request is processed by the call centre by using a specific database which holds information so that these types of requests can be scheduled effectively. By having this option, a wheelchair user will have peace of mind that a ramp will be available on the bus that turns up.

The public transport authority, during the tendering procedure related to bus services in the metropolitan area of Bologna, is in a position to define the patterns of the competition for the allocation of transport services, thereby establishing the criteria for the operator’s selection. Once the procedure is finished and the service contract is in operation, the control activity is essential.

In Bologna, the service contract is explicitly set so that the operator maintaining, managing and integrating it can do so appropriately and the fleet has the obligation to ‘provide vehicles in number and kind to ensure the execution of the service in precise compliance with all the requirements foreseen in tender documentation and in the offer’. In particular, they must ensure that vehicles with special features and characteristics (access for people with disabilities, environmental class, capacity etc.) are available in adequate amount and in the highest possible extent. They must also grant that they are used with the utmost effectiveness and ensure full and proper functioning of any relevance of the vehicle (plant monitoring and remote control check, manage travel documents, safety and passenger comfort, accessibility for people with disabilities, etc.)

Furthermore, SRM is under constant control, via detailed reports, of:

Additional provisions are put in place regarding the call centre for information. They have to provide information to users, collect complaints, proposals and suggestions on the management of services as widely as possible, whilst understanding and facilitating access to services and information for persons with disabilities. The call centre operates seven days a week between 07:00 and 20:00. The telephone service operates to an average waiting time of no higher than 120 seconds.

In 2015, within the framework of the TIDE European Project3, SRM developed a web-app called DegustiBus for collecting user feedback about the quality of public transport services. The tool is based on the UNI-EN 13816 regulation on Standard Quality of Service in the EU. One of the main quality criteria is strongly related to accessibility.

The main objective of the DegustiBus project was twofold. The authority was to provide itself with its own customer satisfaction tool, continuously fed and updated by users, through which public transport users can leave their positive or negative feedback on service quality.

Data collected through this web-app are available to the User Advisory Committee (UAC) for Public Transport in Bologna – an independent board established in early-2014, representing users’ categories. The biggest constraint of the UAC – that consists of 12 members chosen among users, representatives of associations, students and traders – is to overcome the assessment of the public transport service based only on personal experience of the committee components, in favour of an extensive experience potentially offered by all users.

DegustiBus is multilingual and accessible via smartphones, tablets and desktop computers. It has a back-office panel to view all data collected both pre-processed and/or in raw form. It can be replicated in other cities by local public transport authorities without any further changes. The code used is open-sourced and free from copyright. Feedback can be given on some predefined elements, which derives from the UNI-EN 13816 regulation and are also part of the Service Contract fines/prizes system in Bologna. However, predefined elements can be easily modified and/or updated through a management panel (thus even allowing ‘temporary’ surveys on specific issues).

In 1988, Dora Ramazzotti joined ATC SpA, the then public transport company of Bologna, Italy, and in 1994 she became the General Manager’s PA. In 2002 Dora focused on European projects and obtained a Master in Europrojecting from the International University Centre in Florence, Italy. In November 2003 she joined SRM – Reti e Mobilità (Networks and Mobility), the authority for local public transport, and since November 2014 has chaired the Working Group on Transport Safety and Security of POLIS, international network of cities on innovation of public transport. Dora is skilled in accountancy and project management and among her experiences include: TOSCA (Technological and operational support for Car Sharing) IST-1999-20856; MOBISERVICES IST-1999-20794; ALTAIR – e-Contents-2003; MISS FP6–2004–516235; InMoSion FP6-Science Shop–2005-44654; MIMOSA – Civitas; STAR TRANS (FP7); Flipper – Interreg VIC; EPTA – Interreg IVC; SIMPLI-CITY (FP7); P-REACT; TIDE; EUSTO; and eVai!.

Andrea Bottazzi graduated in Mechanical Engineering in 1986 and Post Graduated in Transportation Engineering in 1999 from the University of Bologna, Italy. He joined ATC SpA, the then public transport company of Bologna, in 1987 and since 1998 he has been responsible for rolling stock and management of depots. In 2012, ATC merged with other local public transport companies, establishing TPER – the biggest operator of the Emilia-Romagna region. Andrea is a Lecturer for many courses at the University of Bologna within the Engineering Faculty and Transport Department, especially for topics such as operational management of public transport in metropolitan areas, and the design of transport facilities.