A good transport interchange will make travel easier. There are many elements that determine the overall quality but, broadly speaking, that is the acid test. For Eurotransport, Transport for Greater Manchester’s Head of Programme Management Services, Peter Boulton, explains how that idea exists at the very core of completed, developing and planned interchange projects across the region. 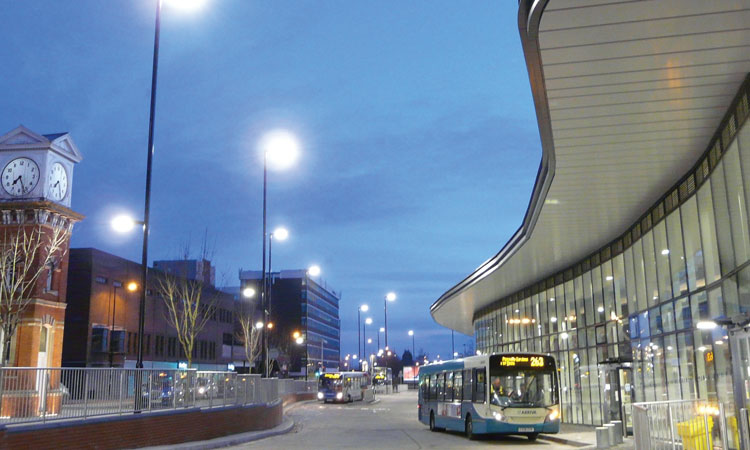 Greater Manchester is the home of the UK’s largest regional economy and a diverse population of over 2.7 million people. It boasts an extensive and rapidly expanding public transport system, currently undergoing £1.5 billion of investment to help drive economic growth and create 21,000 jobs. TfGM’s 25-year vision for the city-region is to create an integrated world-class transport network that supports long-term, sustainable economic growth and access to opportunity for all. Central to this is protecting our environment and improving quality of life for Greater Manchester residents. With a growing population tipped to hit 3 million by 2040, it is essential that transport supports sustainable growth as well as enabling the development of an innovative city-region and creating a joined-up, multi-modal network is key to realising this vision.

The £19 million redevelopment of the 133-year-old Altrincham Interchange site was brought into operational use on 7 December 2014. The site is currently the only location in Greater Manchester where passengers can seamlessly interchange between bus, rail, tram, cycle, walking and taxi as a method of travel.

Rail services have been running from the site since it was opened on 3 April 1881 as Altrincham and Bowden Station. The former station forecourt on Stamford New Road was transformed into a bus station, which opened in November 1976. It was at this point that the facility began to be known as Altrincham Interchange. In July 1992 rail and bus services were joined on site by light-rail, and Metrolink services began running between Altrincham and Bury, via Manchester city centre.

Central to the site’s intermodality is the 45-tonne steel bridge that links the four platforms serving the rail and tram lines with the bus concourse. The bridge vastly improves passenger access between all modes of transport via new stairs and lifts. This was a key motivation behind the whole project. Delivery of the bridge was a considerable feat of construction, with a 750-tonne mobile crane used to lift the two preformed segments of the bridge into place in April 2014. The first segment was 16m-long and weighed 25 tonnes, while the second was 11.5m-long and weighed 20 tonnes. The two segments were then joined together at the central platform support structure.

The final piece of the intermodality jigsaw was delivered in 2015 with the opening of the Altrincham Cycle Hub at the interchange. The secure facility has 56 cycle parking spaces covered by CCTV, with swipe-card access and lockers for storing cycle helmets and other cycling accessories. From just £10 a year, people can park their bike at Altrincham Cycle Hub, as well as gain access to 10 other local hubs across Greater Manchester – with more membership options available at Manchester City Tower and MediaCityUK cycle hubs, which offer showers and lockers.

With its history as a site renowned for local transport innovation, it is perhaps appropriate that Altrincham represents the pinnacle of intermodality for the region. Customer satisfaction surveys taken in March 2013 (sampling 306 people) and November 2015 (sampling 362 people) drew a number of interesting conclusions. Taken before and after the upgrade, the surveys showed a significant increase in overall levels of satisfaction with the facility as well as a decrease in the number of people dissatisfied with it. Anecdotally, a lot of people also commented that they appreciated the ease of finding their way around the facility. While the majority of those asked used the interchange prior to redevelopment, there is an indication that there has been an increase in the number of new customers. Furthermore, of those previous customers, around 20 per cent claim to now use it more often.

While the Altrincham project sought to improve intermodality between transport modes already based on site, the £48 million Bolton Interchange project faces a different set of challenges.

Progress to deliver the flagship scheme has taken a major step forward in recent months with the completion of the pre-cast concrete frame and steel superstructure. Work will soon start to install the high-tech, super-lightweight Ethylene Tetra Fluoro Ethylene (ETFE) roof, which is the same material that was used to craft rooves at the Rochdale and Altrincham interchanges and Victoria Rail Station in Manchester. Once the roof is fully installed and construction is complete, the building will provide a modern, accessible and sheltered environment for passengers to obtain information and wait for their services. The new interchange will provide better passenger information and ticketing facilities and a safer, more secure waiting environment.

The increased intermodality provided by bringing bus, rail and cycling facilities closer is a key part of the town centre’s regeneration plans. Together with the development of a new £6.5 million, 35,000ft2 office block fronting Great Moor Street, it is anticipated that the interchange will act as a catalyst for regenerating the wider town centre area. The close proximity of these developments to the town centre will improve linkages and connectivity for bus and rail passengers between the new Interchange and the retail/civic core.

A key element of making travel easier for people is involving them in the project. It gives them a chance to feedback, inform and influence something being built to benefit them and their daily lives. It also develops a sense of community ownership and pride in the facility.

In February 2016 full planning permission was granted for the new Tameside Interchange (Ashton-under-Lyne) project. Scheduled for completion in late-2018, the new facility will be built mainly on the site of the current Ashton Bus Station, moving closer to the Metrolink terminus. This will make it easier for people to change between bus, Metrolink and – with ongoing Town Centre initiatives being delivered through ‘Vision Tameside’ – the rail station, as well as providing improved pedestrian routes from the interchange to the town centre and nearby shopping centres. The approved plans include constructing an attractive, covered concourse and additional ‘satellite’ shelters to replace the five ‘island platforms’, improving waiting areas, cycle parking and making access to travel information and tickets easier.

To fulfil the need for community engagement, a four-week consultation was held in August and September 2015, when outline designs were shared with elected members, stakeholders and residents.

Members were briefed about the interchange proposals and had the opportunity to ask questions and make comments via meetings and emails. Three separate presentation and question and answer sessions were also held for them during the four-week period, providing plenty of scope to scrutinise, learn and feedback.

Residents were targeted via the distribution of 7,524 leaflets, 5,824 of which were delivered to properties within an 800m radius of the interchange site. In addition, 25 large posters and 250 smaller bus information posters were hung at the existing Ashton Bus Station and local Tameside bus stops, while information was also disseminated via local media as well as TfGM and Tameside Council’s social media feeds and websites. Five public information events were also held in Ashton-under-Lyne, running from 10am to 5pm.

Consultation feedback showed significant support for the proposed design and facilities. The elements of the project designed to make travel easier, such as the improved shelter and seating, the new bus, rail and Metrolink information screens and the improved security measures, were particularly welcomed by participants. However, there were some recommendations made by members of the public to extend the interchange roof and erect a boundary wall to reduce the impact of noise on nearby residents.

As a result of the feedback, a few minor amends were made to the plans before they were submitted for approval.

With heavy investment and expanding demand on the transport networks, effectively functioning interchanges are a vital cog in the region’s network. People want direct and easy journeys, so we will continue to work with passengers, stakeholders and other authorities to improve the effectiveness of how each individual service interacts with the others. By making travel easier, we can hopefully provide better connections to support long-term, sustainable economic growth, reduce emissions and encourage more people to use our excellent public transport system.

Peter Boulton has been Transport for Greater Manchester’s Head of Programme Management Services since 2009. Peter has a wealth of experience in developing and delivering a wide range of transport infrastructure projects including transport interchanges, highways, light-rail and heavy-rail schemes. Peter is currently responsible for managing the smooth delivery of over £300 million transport spend on transport projects across Greater Manchester.