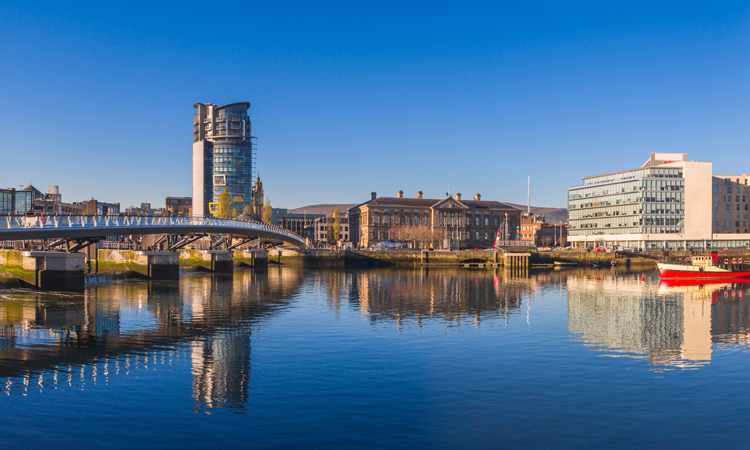 The first phase of BRT, covering approximately 25km of existing roads, will provide fast and reliable services connecting the east and west of the city, the Titanic Quarter and key locations of economic and social activity in the city centre and along the BRT corridors. It will offer a unique, high quality, cross-city service providing people with improved access to jobs, hospitals, shops, schools, colleges and entertainment. In so doing, it will support social inclusion and the integration of communities across the city. Subject to the success of the first phase, the Department intends to expand the network to cover the north and south of the city.

The BRT project represents a £90 million investment by the Northern Ireland Executive. It is a complex project involving 12 separate infrastructure schemes (including roadworks, BRT halts and the provision of Park & Ride facilities), the procurement of BRT vehicles, a new depot and servicing facilities, a new ticketing system, co-ordination with other major public and private projects along the routes, and integration with existing public transport services.

The BRT system will use high quality rapid transit vehicles which will provide a modern, comfortable environment for passengers in terms of space, security and on-board information. They will have a strong identity and high quality appearance that is easily distinguishable from existing public transport vehicles. In November 2015, following an open European procurement competition, the BRT vehicle contract was awarded to Van Hool, supported locally by Road Trucks Ltd. The new vehicles will be 18.6m-long articulated buses with a capacity of approximately 100 people.

The tram-like buses will form a key part of the BRT system image. They will provide accessible easy boarding for people with reduced mobility, as well as a mix of standing and seating areas with good legroom. They will have three sets of double-doors and circulation room to enable rapid boarding and alighting, thus minimising the time spent at stops and thereby reducing journey times. The vehicles will also feature air conditioning and high quality materials for passenger comfort; CCTV for passenger safety; on-board passenger information screens; audio announcements and Wi-Fi. The vehicles will utilise some of the latest hybrid technology with lower noise, vibration and emission levels. They will be built over the next two years and are scheduled to come into service on the new BRT network in September 2018.

The system will feature new, high quality BRT stops – also forming a key part of the BRT system image – and will be distinct from existing bus stops. They will provide shelter, security, real-time information systems for easier journey planning, off-vehicle ticketing to speed-up the boarding process, and quick easy access to the vehicles. In order to provide shorter, more reliable journey times and maintain acceptable walking distances, BRT stops will be at a target minimum distance of 400m apart. Where there are key locations of high demand, stops will be closer together. This means that the number of existing bus stops on the routes will be reduced by about a third.

The BRT services will replace most of the existing bus services on the routes. When BRT comes into operation, feeder and complementary services will be provided with co-ordinated timetables and appropriate interchange facilities. The main facilities will enable easy and convenient interchange between the private car, feeder services and BRT services. Cycle parking will also be provided at these facilities and at other stops along the routes, where appropriate.

Subject to demand, it is proposed that BRT services will operate between 5:30 and 23:30 on weekdays and weekend times will start slightly later in the morning and potentially operate later at night. Peak-time services will operate at maximum intervals of eight minutes, with early morning and late evening services operating at intervals of around 25 minutes. One of the advantages of the rapid transit system is that services can, and will, be tailored to meet times of peak demand such as major sporting or entertainment events.

In addition, rural Ulsterbus services from outside Belfast into the city centre will continue to operate on the BRT corridors and will benefit from the increased bus priority on the routes and therefore experience shorter and more reliable journey times.

The infrastructure on which the BRT services will operate will consist of both dedicated bus lanes and mixed traffic lanes. Where new bus lanes are introduced on the BRT routes prior to BRT becoming operational, they will operate during peak hours only. In 2018 it is intended that the bus lanes on the BRT routes will operate from 7:00 to 19:00, with relaxations for deliveries, servicing, etc. In order to provide priority and journey time reliability for BRT vehicles it is necessary to remove and/or relocate on-street parking that affects the BRT bus lanes. Existing lay-by parking will generally be retained and short-term parking restrictions will be introduced to discourage all day parking and encourage the turnover of parking spaces. There will be strict enforcement of parking and driving offences in the bus lanes by way of static cameras and mobile detection units to help ensure journey time reliability for the BRT system.

A vehicle detection system will give optimum priority to BRT vehicles at signalised junctions and turning movements will be banned at a number of locations to assist the flow of traffic along the BRT corridors. BRT bus lanes will generally be 3m-wide and will be resurfaced over the majority of the route to ensure a high ride quality. Improvements will be made to surface drainage systems with more extensive use of side inlet gullies to further enhance ride quality, reduce road noise and prevent damage to the ironwork. Adjoining footways will also be reconstructed to improve the surface for pedestrians.

Environmentally-friendly LED lighting will be installed along the majority of the BRT route, offering energy savings and lower maintenance costs. Traffic signal equipment is being upgraded and additional pedestrian crossing facilities installed to improve access to stops.

A key part of the successful delivery of high quality rapid transit systems is the development of a strong brand image. The brand will be applied to all aspects of the system including travel information, stops, vehicles and signage. High quality customer service will be a key objective of the system.

Implementation of the new BRT system commenced in 2014 and a new 520 space Park & Ride facility has been constructed in the east of the city which is currently being served by existing public transport services in order to encourage modal shift and increase public transport patronage in advance of BRT becoming operational. Infrastructure works are underway and new peak hour bus lanes are being introduced on sections of the BRT route in east and west Belfast.

BRT is scheduled to become operational in September 2018.

Ciarán de Búrca is Director of the Transport Projects Division in the Northern Ireland Department for Infrastructure. He has responsibility for a number of transportation projects including the Belfast Rapid Transit plus e-car and Park & Ride projects. Ciarán, a Chartered Engineer and a Fellow of Engineers Ireland, has a wide range of experience in managing, planning, designing and implementing major transportation policies and projects.