Posted: 11 June 2017 | Ondřej Krulikovský, Head of Service of Buildings and Tracks at Prague Public Transit Company (DPP) | No comments yet

In this article for Intelligent Transport, Ondřej Krulikovský, Head of Service of Buildings and Tracks at Prague Public Transit Company (DPP), describes the standard maintenance work that takes place on Prague Metro’s rail superstructure, which encompasses ongoing renewal and improvement to the track system. He explains the key activities that take place during the downtime period – between 1:10 and 3:50 a.m. – which include the re placement of wooden sleepers with those of concrete, restoration of freestanding fastenings and systemic rail grinding. 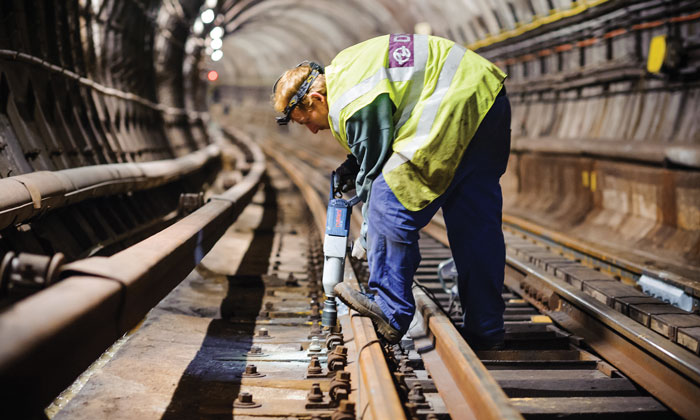 It is the DPP’s Service of Buildings and Tracks department that ensures the management of the rail superstructure, the tunnels and other constructions within the metro in Prague. In total we maintain 61 stations, 31.27km of tracks in tunnels with sleeper fastenings, and 99.44km of tracks with freestanding fastenings. In tunnels, we take care of 40 switches in gravel beds and 64 switches with freestanding fastenings. There are a further 161 of such switches in three depots. We also maintain three test tracks with a total length of 5.2km and one siding, which connects the Kačerov depot to the railway network. We spend approximately CZK 210,000,000 annually on the maintenance of the rail superstructure, the tunnels and other structures.

With regard to fastenings, in the Dejvická– Jiřího z Poděbrad section of the A line and the Florenc–Kačerov section of the C line, wooden oak or beech sleepers with classic base fastenings were used. The S4 wedge base is attached to the sleepers by means of S1 (R1) screws, then a polyethylene pad is placed between the base and the sleeper; the 49 E1 rail is laid on the 8mm-thick rubber base and it is fixed by means of ŽS 3 (ŽS 4 or Skl 12/24) solid clamps. A rail grid was then assembled in the tunnel; a formwork of the central drainage gutter was prepared and the sleepers were concreted.

However, after about 20 years of operation, the sleepers had completely dried out and become rotten in places, owing to permanent water presence. It therefore became necessary to anchor them at the location of the head. Another major disadvantage of this fastening is the possibility of adjusting the gauge or the bracing that is restricted only to drilling, i.e. by moving the base on the sleeper. Due to the low holding capacity of the screws, the sleepers had to be mounted on enlarged eight-hole bases. Another important factor in their replacement was the increasing noise and vibration that was transmitted directly to the tunnels and surrounding buildings. For these reasons, wooden sleepers were replaced with those made of reinforced concrete. In cooperation with the manufacturers of the sleepers, Building Chemistry and the CTU in Prague, a new method of construction was developed that comprises a non-prestressed reinforced concrete sleeper mounted on a base plate, which is cast with ICOSIT in place of the original wooden sleeper. This gives increased flexibility to the structure and separates the sleeper from the concrete, thereby causing the aforementioned reduction of vibration transmission. Out of a total of 36,000 sleepers, we have yet to replace approximately 27,000.

Another type of maintenance work is the replacement of rails. This is carried out on the basis of several criteria: travelled load, large side wear and because of defects.

An overview of the track load is processed in individual sections once a year, with roughly 22,500,000 GTKM being travelled. The current upper limit for exchange is 550,000,000 GTKM, with the proviso that – owing to the introduction of systemic rail grinding – it has been increased to 650,000,000 GTKM.

Side wear occurs particularly in curves with a radius of 350m. In accordance with the T1/1 operating instructions, we observe levelled wear, while the maximum value of the side wear is 18mm. In these curves it is necessary to replace the outer rails every seven years. Due to the requisite pairing of solated contacts, the swapping of the rails is not implemented.

Another reason for the replacement is the defects caused not only by the wheel-rail contact, but also due to water dropping on the railhead.

In the Hostivař Depot in November 2016, the 350 HT hardened rails were installed as part of testing in a curve with a radius of 240m and a test thermite weld was implemented. In addition 400T hardened rails will be inserted in one curve of the 150m radius. At present, measurements of the rail profiles and the flatness of the thermite weld are implemented at regular intervals.

Currently we are replacing rails at a rate of approximately 14,000m of track per year.

The restoration of freestanding fastening

The first section on which the freestanding fastening of rails was implemented in 1978 was the first track at Mu° stek station on the A line. This was the developed Metro mounting – the ribbed base that is eccentrically attached to the rail concrete by means of two 24mm anchor bolts, with a 15mm rubber washer between the base and the concrete, the separation polyethylene pad and a plastic concrete support. Its requisite thickness is 15-42mm. Since the anchor bolts were cut off due to the small depth of their insertion and by extending the 42mm support height, the method of fastening onto the base plate was developed. Using this system the shortened ribbed base is deposited on the 15mm rubber base and attached by means of Aekp clamps with a layer of insulating insert. The rail is then fastened using the Skl 12/24 clamps. The diameter of anchor bolts is 30mm. This unified system is used for the reconstruction of the fastenings and for concrete sleepers. Most of the curves have already been reconstructed and at present the extent of this work amounts to approximately 200m of rail per year.

In 2015 the decision was made to introduce systemic rail grinding to the metro in two phases. During the repair phase, as part of the grinding of the entire network, the rails are brought into the required standard condition. The newly installed rails and the burnt insulated connections are also ground down to ensure the necessary noise reduction. In the operational phase a corrective rail grinding is implemented where less material is removed and the grinding of new rails is carried out. To this end, the DPP’s subsidiary, Pražská strojírna a.s., will obtain a new AT 2200 – TE grinding machine from the AUTECH Company. Currently we are grinding 40,000m of rails per year.

We participate in the implementation of the systemic grinding of switches to extend the life of their individual parts. Together with their producer we are also engaged in bringing Switch Logs into practice. The aim is to map the lifecycle of the switch when carrying out the prescribed maintenance work.

Ondřej Krulikovský graduated from the Czech Technical University of Prague from the Faculty of Transport. Immediately after education, he joined SKANSKA where he was promoted from the position of Assistant Construction Manager to that of Chief Construction Manager and was managing maintenance work carried out in the metro. Subsequently, he worked for a year at the EDIKT Company and in 2015 Ondřej joined Prague Public Transit Company (DPP) as Head of Service of Buildings and Tracks.

By Ondřej Krulikovský, Head of Service of Buildings and Tracks at Prague Public Transit Company (DPP)