Efficient as a tram, flexible as a bus

Roger Kesteloot, Director General of De Lijn, explores the advantages of the tram bus as a mode of public transport when the construction of subway or tram infrastructure is not a feasible solution to reduce traffic congestion in cities. 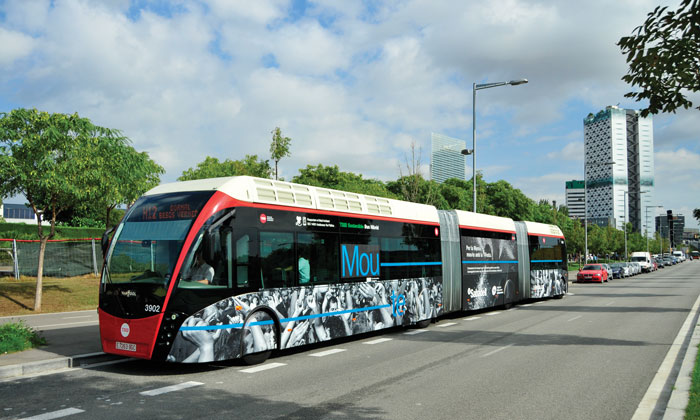 Ask anyone about their memories of the ‘City of Light’, and nine out of 10 times they’ll say the Eiffel Tower, Louvre and the Arc de Triomphe – all of which are impressive and photogenic locations that have been immortalised many times over. One of my fondest memories of Paris, however, isn’t something you’ll find when Googling images of the French capital. This is not surprising, really, since it is something that sees little daylight, yet millions of people experience it every year. I’m talking about Métro Line 1.

Line 1 opened in 1900 and is the oldest metro line in Paris. It covers the most important axis from east-to-west and largely follows the Champs Elysées and Rue de Rivoli. A fascinating fact for public transport enthusiasts , but the reason that Line 1 has been indelibly stamped on my memory is that it has been running on rubber tyres since 1964. For the sake of historical context, Métro Line 11 – from the central Châtelet to Mairie des Lilas in the east – was the first rubber-tyred metro line in the city. A second interesting fact is that all trains on Line 1 have been operating fully-automatically since December 2012.

The advantages of a subway network are well-known: large capacity and excellent punctuality thanks to separate and non-conflicting infrastructure. Aboveground, a tram on its own track sections rivals that of the subway, but what if you don’t have the time or budget for tram infrastructure and its accompanying vehicles? Buses are not an equivalent alternative, first and foremost due to their lower capacity. And in order to ensure a commensurate number of passenger spaces, a large number of buses would be required. In this situation, the most important cost factor is the driver, not the bus.

So, what is the solution if you don’t have the time or money in the short-term for trams and their infrastructure? The answer is the ‘tram bus’: a tram on pneumatic tyres. This should not be confused with the construction method in which the control unit (and usually also the entry door) is located in front of the front axle.

The tram bus must have its own infrastructure in order to reach a good operating speed. What makes the tram bus so unique is that it combines the efficiency of a tram with the flexibility of a bus. The tram bus can best be com pared to an articulated bus: its length (up to 24m) gives it a much larger capacity than a traditional bus and, apart from the diesel version, it can also run as an electric or hybrid vehicle, making it even more environmentally-friendly. A trolley version is also available.

In addition, a tram bus can be deployed faster and more flexibly on new lines since it does not run on tracks. In terms of operating costs, a tram bus offers the advantage of requiring only one driver – as opposed to two drivers for a standard bus – although you need to consider the fact that a tram bus does not last as long as a tram and has less capacity than its tracked counterpart.

Our transportation company would like to test tram buses on four lines in Flanders (the northern half of Belgium). These lines are the ones to Brussels, Brussels Airport and the outskirts of Antwerp and Ghent (the two largest cities in Flanders). The first test was conducted in summer 2016 on the future Ring Tram line which will run from the Heysel district in north-western Brussels to Brussels Airport and the north-east. During the test, we examined which adaptations to the road infrastructure would be needed to ensure a tram bus that runs smoothly and safely.

A good traffic flow is essential. Brussels has the unenviable privilege of being the European traffic jam capital. The surrounding area also struggles with tremendous traffic congestion every day. Consequently, an alternative is now required more than ever. In order to offer a reliable and punctual alternative, the tram bus requires its own sections in some locations, otherwise it will simply be stuck in traffic with all the other vehicles.

Ben Weyts, the Supervising Minister for De Lijn, would like to launch the tram bus officially in 2019, right before the start of the works on the ring road around Brussels – the most important motorway in the country.

“The construction of tram tracks is both costly and time-consuming,” explains Ben. “The tram bus makes it possible to offer a faster alternative to cars and congestion. We can thus provide travellers with a wider choice of smooth and comfortable public transport options in the short-term, making the tram bus the perfect stepping stone to a traditional tram.”

In these times of smart cities and connected vehicles, our approach and mobility options are evolving faster than ever. Data travels around the world through a cable or the air, but people still need vehicles to get around. Until Scotty can ‘beam us up’ Star Trek-style, public transport will continue to be an essential component of our mobility.

Director General, Roger Kesteloot, has been at the Head of De Lijn since 2009. In 1998 he started work as European Coordinator, and then became Head of the Policy Unit and Director of Research. Before that he worked as a journalist, including as Chief Editor of Antwerp regional television and Deputy Chief Editor of the Flemish newspaper.