Powering buses of the future

Intelligent Transport’s regular blogger Graham Ellis looks at how our buses and coaches will be powered in the future and what that means in terms of maintenance. 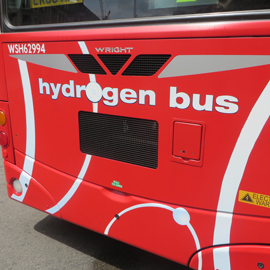 This month I thought that I would take a look at how our buses and coaches are going to be powered in the future and what that will mean in terms of maintenance etc.

The reason for the question is that at the UK’s National Exhibition Centre in Birmingham earlier this month I was wandering around the bus and coach manufacturers stands at the Euro Bus exhibition and everywhere I looked all I could see were either gas or electric powered vehicles.

From what I could see it appeared that diesel, as a fuel, was heading towards the great graveyard in the ground but I was not sure that this would be achievable in the short to medium term. In my June blog I reported that the Mayor of Paris has decreed that there should be no diesels in the city of Paris from 2020, well the manufacturers have certainly taken that on-board and are working to be able to supply that need.

I will come back to the vehicles currently on offer in the UK but I want to open the discussion up and to look at as to what power we should be using for future public transport. Here in the UK we are concerned about the resilience of our National power supply system with older power stations coming to the end of their operational life or in some cases being unable to meet the latest emissions regulations and no viable long-term plan to replace them with either gas or nuclear power. 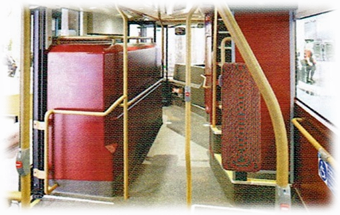 Battery pack over nearside wheel-arch and “corridor” from front entrance

In fact the planned four nuclear power stations for the UK are going to be constructed by EDF of France with Chinese partners!! The design of nuclear generation chosen has however already proven to be problematical with the installation in the Flamanville, near Cherbourg power station having serious problems concerning the standard of the steel used to construct the safety casing around the nuclear reactor. As if this wasn’t bad enough, the project is already behind schedule and three times over the planned budget, and the safety casing for the first UK power plant already having been constructed.

If the four planned power stations are not constructed soon then the UK will have a serious power shortage that could lead to power sharing at peak times and a reduction in power to non-essential users, who those would be is yet to be announced but whoever they are it will have an impact on the ability of the UK to operate as it does today.

OK that’s a bit of background, so how does this relate to new power sources for public transport? Simple, if as in Paris we are moving towards electric power for all of our transport in the cities then we need sufficient power available to re-charge those buses, either during the day or more likely at night-time. So it is likely that to achieve a good balance of power generation against power usage we will have to supplement electric buses with something else.

That something was also on display at Birmingham and it was the use of gas buses, either Compressed Natural Gas (CNG) or Liquefied Natural Gas (LNG), both of which were available as options and which follow the Paris model. So now we have two non-diesel sources of power for our buses but what was on offer to the potential operator?

Volvo had on their stand an electric double-decker; coded B5HLC; which had a Wrights SRM body mounted onto the chassis and was aimed at the London market, being in TfL colours. This vehicle was fitted out to work with an overhead gantry for opportunity charging along the route and at termini. It was a neat installation except at the front entry door where, for me, it was like entering a cave because the batteries had been mounted over the nearside front wheel-arch in what looked like a maroon coffin and you could not see out of the front nearside window. 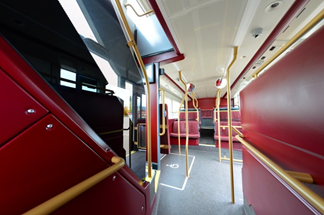 View from front to rear, batteries on right hand side

In London this would be unacceptable due to the potential conflict with cyclists but, it has to be said that this was an experimental vehicle and I would hope that the batteries a relocated elsewhere allowing vision to be reintroduced.

London also featured on the BYD stand where they had their version of an all-electric bus on display, this did not have the gantry charging facility but the interior layout was far better than the Volvo. 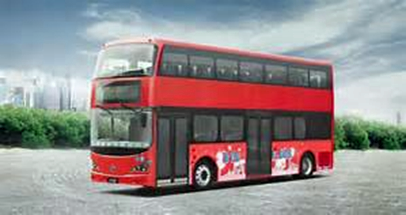 Not to be left out, Optare also had a full electric double decker on show, called the Metrodecker, but this one was originally diesel powered and has been reworked by Magtec into a full electric option. Where the engine and gearbox used to be is now a 200Kwh battery pack which gives the bus a range of 105-145 miles, dependent upon duty, and a re-charge time of six hours.

However, if electrical power is in short supply then an option is to utilise the alternate fuel of gas. Two gas powered vehicles were on show the ADL Enviro400 CBG body on a Scania NUD280 chassis, one as the ADL demonstrator and the other as part of the Reading buses fleet. In standard conditions the engine will run on CNG but it is also capable of running on biomethane from waste. Running on biomethane the CO2 output can be lower than that of an electric bus, probably as there are no greenhouse gases from a power station! 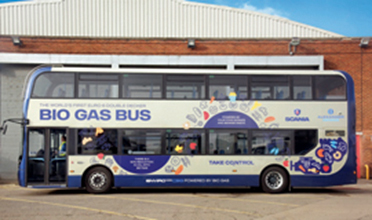 What is patently obvious though is that our infrastructure in the depots and skills of our fitters will have to be upgraded to meet these new engineering challenges; you cannot just park a gas bus over a pit and start work. There needs to be fume extraction in the pits as gas is heavier than air and fitters will have to be certified as gas fitters like the local plumber if they want to work on these vehicles.

For electric buses there is a need for a large number of charging points around the depot and recently London Buses had to alter the depot at Waterloo to accept the new electric buses being introduced there. In addition, the old style mechanical skills will be less in primacy and electrical and electronics skills will come to the fore. As an old fashioned mechanical engineer I would struggle to fix one of the new electric buses due to the high level of electronics used to control these new vehicles so we now have to re-skill our existing maintenance staff and this will take both time and money when margins are tight. I plan to come back to this subject in around 12 months’ time to see what changes if any have occurred in the majority of UK fleets.